Belonging at the beginning of the 1900’s to Lord Denmans, Denmans Gardens reflects the history of Britain in the twentieth century. Lord Denmans sold the estate before the World War One, and it changed hands several times in the early part of the century. The garden and its manor house were requisitioned by the WRAF during World War II. After the war the house was sold off and the garden was transformed from a neglected mess into a productive market garden and then in the 1950’s began its transition into an ornamental garden, reflecting the increasing availability of plant material from abroad. It ended the century as a contemporary garden designed by its then-owner John Brookes MBE. It remains a timeless, tranquil garden featuring a broad variety of interesting and unusual plants that are creatively and brilliantly combined with shingle paths, water features, faux dry river beds, a walled garden, conservatories, and wandering paths dotted with benches and statuary.

From glorious disarray to controlled disarray

Denmans Gardens once was part of the food production side of a minor estate owned by Lord Denmans from the end of the 1800’s to the beginning of the 1900’s.  The estate changed hands several times before being requisitioned by the WRAF during the Second World War.

In 1946, Hugh and Joyce Robinson bought a large portion of the estate, sold off the manor house and “called the rest Denmans”.  It took them several years of exceedingly hard work with their loyal gardener, Bertie Reed, to convert what had become a derelict garden into a working market garden.  They grew soft fruits, vegetables, and flowers for the market in Covent Garden and local shops.

As the privations of the war years receded and there was more time and resources to devote to gardening, Joyce began gardening for her own pleasure and interest, experimenting with plants and with growing mediums, especially gravel.  She would pack a lunch and spend the day at Hillier’s nursery or another horticultural organization, taking notes and learning all she could about plants.

By 1970 she retired from farming and began developing the ornamental garden creating gravel gardens, planting unusual and interesting plants in the Walled Garden, and eventually built two dry river beds inspired by a trip to Delos. 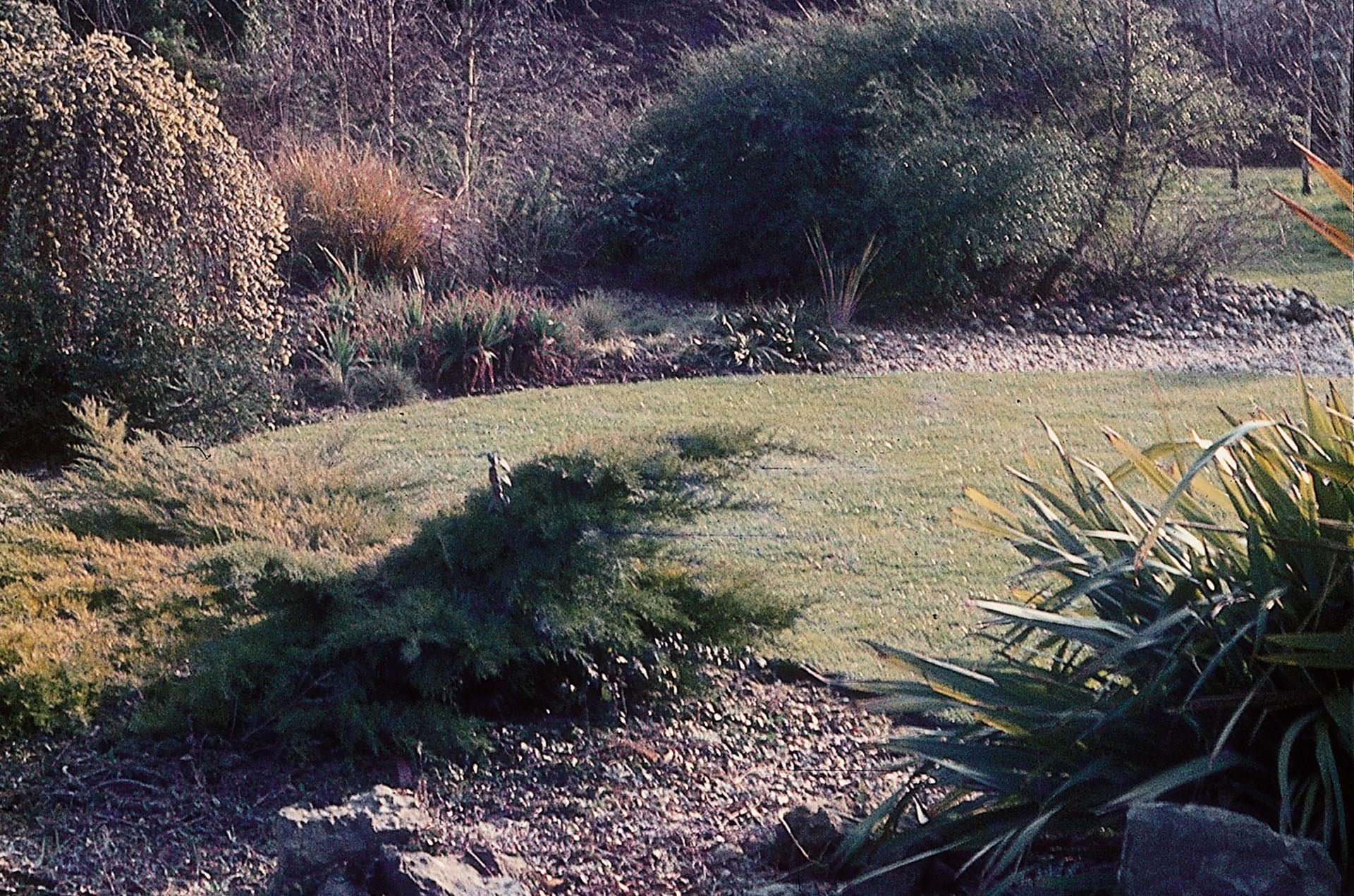 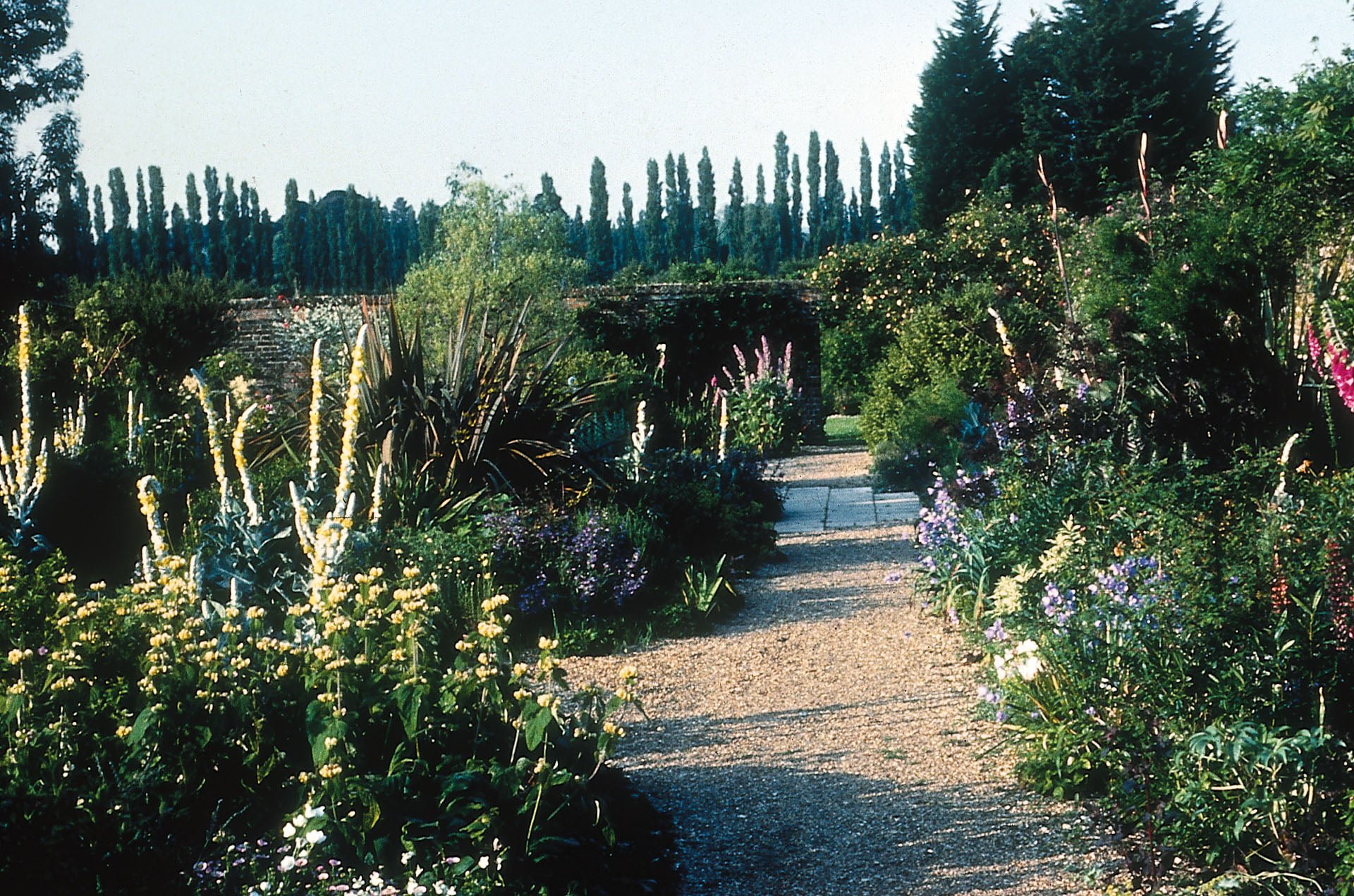 Denmans quickly became a garden rich in diversity and unique attributes that made it as beautiful in winter as it was in summer. She opened the door to the public through the Yellow Book, sold plants she’d grown to various visitors, and wrote articles for local publications. She described her garden as “glorious disarray”, a phrase that became the title of her 1990 book about Denmans.  As Joyce became recognized as a highly knowledgeable plants woman, the garden’s plantings became known for their unusual varieties and combinations,

….it was not trying to be something it was not.  So many gardens in my youth (and still no doubt) try to be grand – playing an 18th century game, but on the cheap.  Nor yet was it too cottagey either…

John Brookes MBE, Denmans – Why does it “work” – or rather why do visitors like it?, August 10, 2010, in Articles, My Favourite Garden

John Brookes MBE discovered the garden in the early 1970’s when, as the Director of the Inchbald School of Garden Design, he took his students to look at gardens. What immediately attracted him was that Denmans was not trying to be something it was not.

He also was attracted by her inventive use of plant material – not the plants themselves as much as but the remarkable manner in which they were planted and the way she played with colour, shape upon shape and texture upon texture. In 1980 he persuaded Joyce –or “Mrs. J.H.” –  to let him renovate the old stable block which he named Clock House, and he moved, in starting his own Clock House School of Design.

Over the years he revised the lay-out of the gardens to make the most of her planting approach as well as the garden’s sloping topography and views. He added a pond at the bottom of the garden, a circular pool at the top, and accentuated his curving lines and paths with shapes of roughly mown grass filled with bulbs.  The inspiration for the shapes of the beds derived from the work of Roberto Burle-Marx, Brazil’s most reknowned landscape designer, whom Mr. Brookes had once met as a young man.  They also acknowledged the difficulty Mrs. J.H. had navigating corners in the buggy which she drove around the garden, a necessity brought on by illness in her later years. 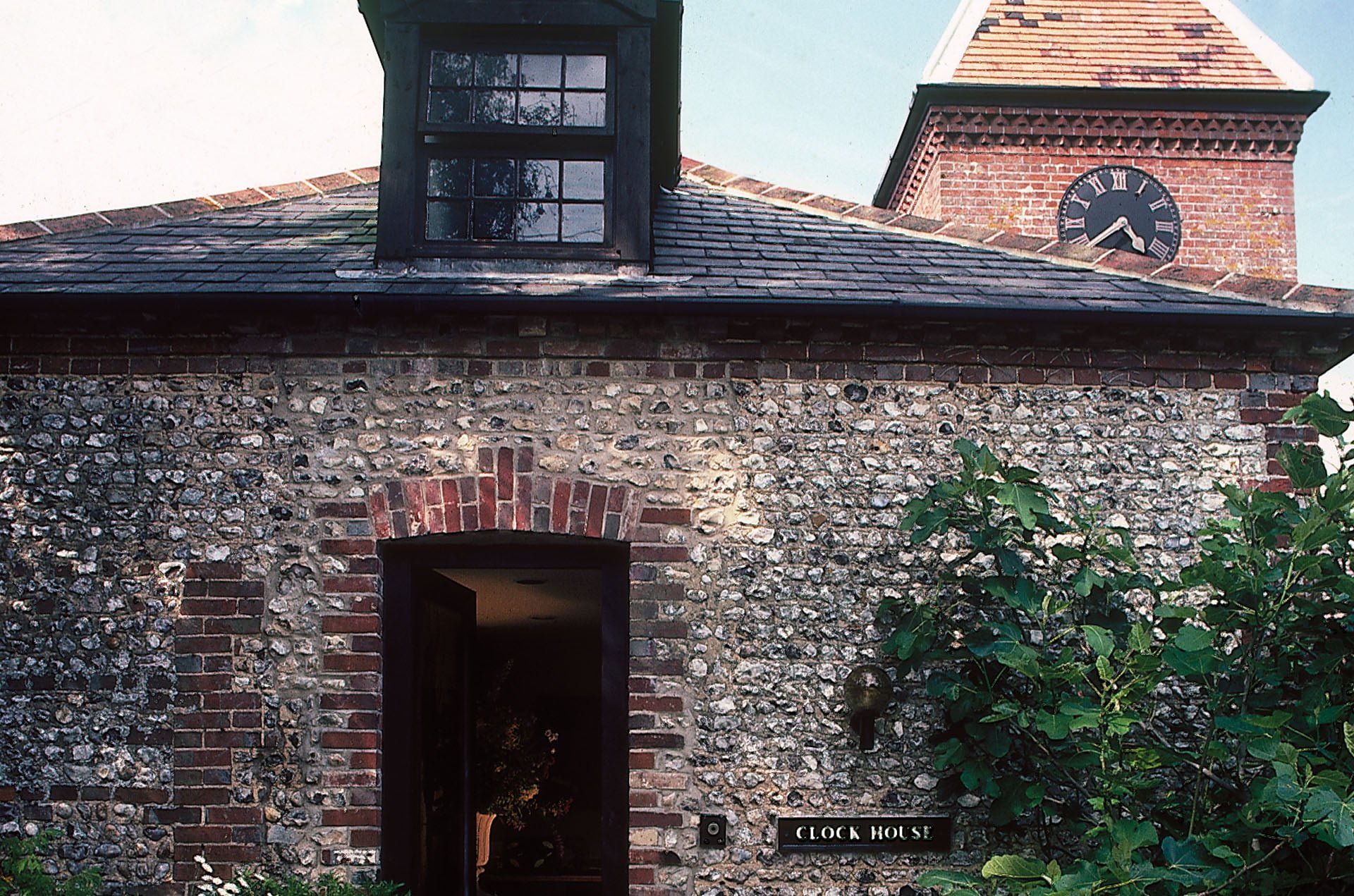 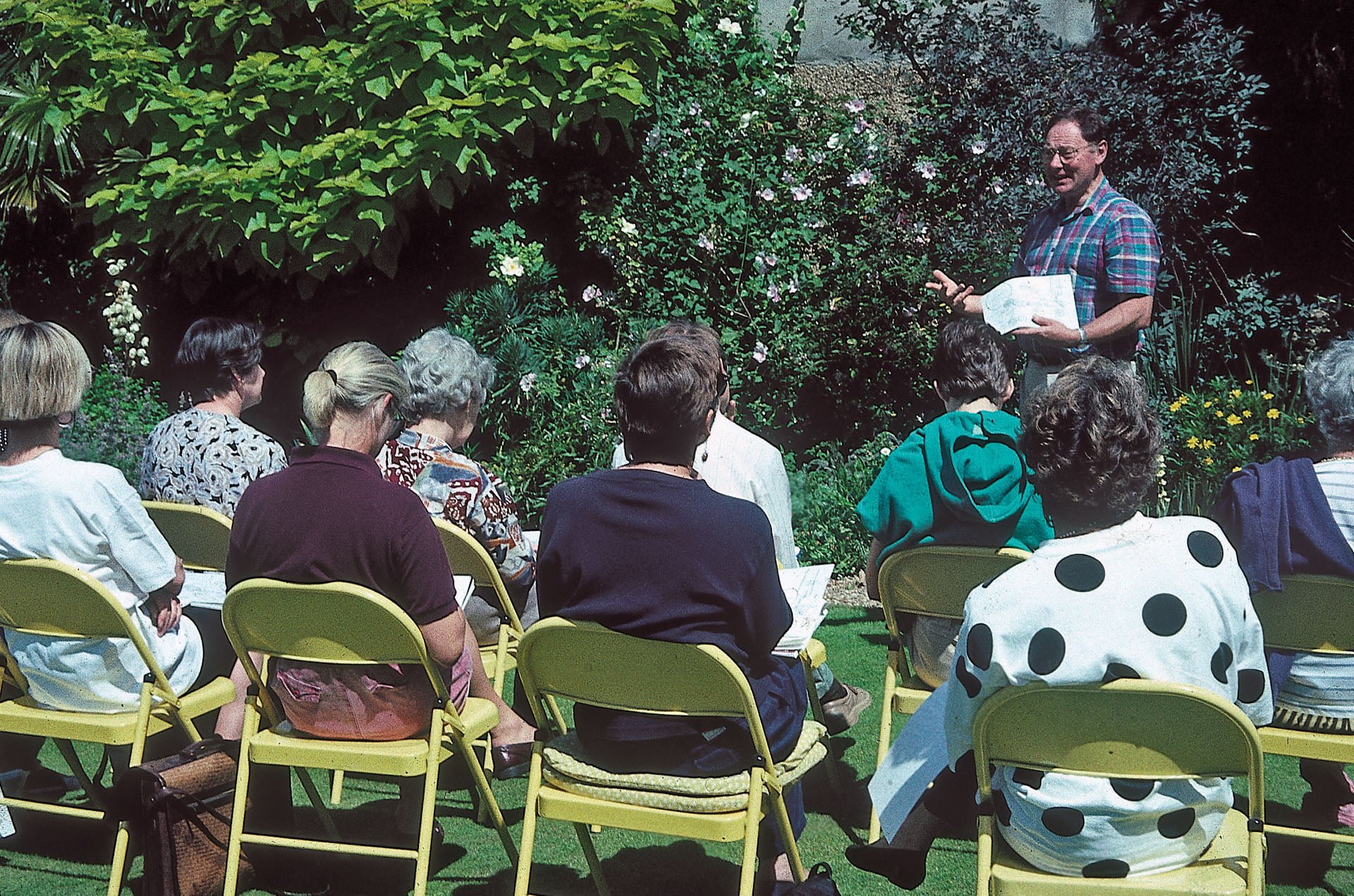 What I did strive to achieve was to give the garden a continuity as one walked round, and a sense of moving through from area to area.  The public get this one very much and say that although it is a 4 acre garden it doesn’t feel like it.

My ‘continuity’ had to take in Mrs J.R’s plantings, so that I reshaped round them using bold sweeping curves.  I was – and still am in awe of much of Burle Marx’ shapes and those of Thomas Church as well, and I worked with them in mind.  These curves make for easy mowing and by leaving areas of rougher grass I can play shape against shape.

These gentle curves also suited Mrs J.R who for the last years of her life went round the garden in an electric golf cart, in which she couldn’t make a right angles turn.  (Because I lived and ran my school in the stable block in what had been her farm – for 10 years or so, we overlapped – so that I was reorganising the garden around her.  And all credit to her she allowed me to do it.  Though not without…)

Of course I have added to Mrs J.R’s plantings, and some I have taken out – plants like humans have life spans and are subject to storm and/or disease – but the overall feel I hope that I have kept.  A dominant feature in summer that contributes is that tall grey Verbascum bombyciferum pop up all over – they are biennial, as do Euphorbia wulfenii in the spring.

John Brookes MBE, Denmans – Why does it “work” – or rather why do visitors like it?, August 10, 2010, in Articles, My Favourite Garden

I was drawn to what Joyce was doing in the garden.  She observed plants growing naturally in dry, stony riverbeds in Greece.  She started using gravel in a natural setting at Denmans at the same time I was using it for more practical reasons in town gardens.  It was a very new thing.

While Joyce was very much a brilliant plantswoman (John believed her to be as knowledgeable creative as the much more well-known plantswomen, Beth Chatto and Margery Fish), John was very much a ground-breaking designer who considered plants, as a whole, the last thing that went into consideration when creating a garden. Their collaboration has resulted in a magical and enduring space that has the best of both horticulture and design.

While Mrs. J.H. regarded her garden as ‘glorious disarray’, John would describe his Denmans garden in latter years as ‘controlled disarray’. For John, Denmans was where he pursued his hobby –gardening – and he never drew a planting plan or plan prospectively for his changes to the garden. As John would later recall, while Joyce said it took her ten years to relinquish control of the garden and it took him ten years to feel he owned it.

In contrast to the serpentine plan of the outer garden, the Walled Garden, which was once where calves were kept and later where fruits and vegetables were grown, is more linear and geometric in its layout.

In the early 1970’s Mrs. J.H, having decided to retire from farming altogether. began to plant herbs, perennials, and interesting trees and shrubs, several of which still thrive there, including kiwis, pomegranites, and QUEENS BOUQUET

John Brookes MBE subsequently transformed the Walled Garden, giving it a completely new design in the early 2000’s with the legacy left him by a close friend. He gave it an almost Mediterranean feel, with tropical plants and fragrance, using counter-pointing forms, shapes and colours in ways reflective of his own hallmark style.

In the 1960’s, John Brookes MBE pioneered the idea of replacing the British obsession for acres of lawn with relaxed areas of planting through gravel or shingle. Recognizing that the modern lifestyle did not include either the time or budget for the high maintenance gardens of previous generations, he increasingly favored lower-maintenance and more natural – but well designed and structured – gardens that were tailored to the specific needs and desires of his clients.

He was attracted to Denmans because Mrs. J.H. was experimenting with planting in gravel, not just in the garden but in the faux dry river beds she had created. Both John and Joyce loved the serendipity of plants popping up in gravel walks and having the luxury of decided what to pull and what to leave –a look John described as that “self-seeding scattery look I like”. 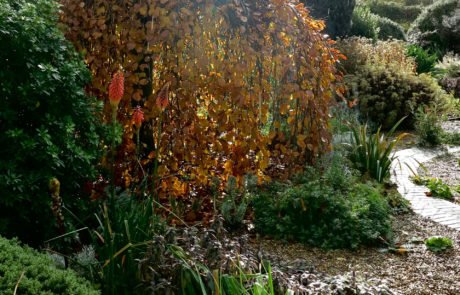 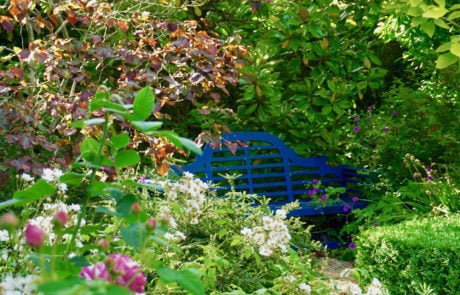 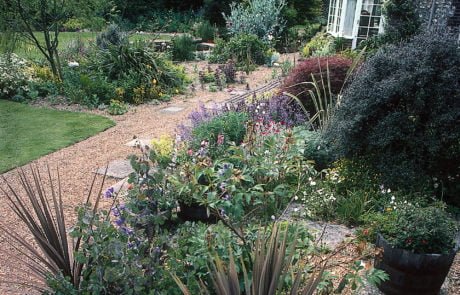 To accentuate the geometry of the lawns at Denmans and reduce maintenance further, John left portions of the lawns to grow relatively long while designating the rest to be mown short.

The short grass became paths and the rough grass was planted with spring bulbs, including crocus, daffodils, and fritillaria melagris.

Flowing from top to bottom of the main garden area and iconic of Denmans, are the two dry river beds that Joyce and Bertie carefully laid out in the early 1970’s.

Mrs. J.H. was adamant that all the stone, shingle, flint, and pebbles from which it was constructed be from Sussex, conceding only to have a long piece of Hampshire stone laid across one of the two beds to act as a small bridge when no stone long or wide enough could be found locally. She planted Sussex natives through the shingle to which John added his own trademark architectural plants and shrub.

The dry river beds terminate at a beach bordering a pond designed by John Brookes MBE and originally built in collaboration with Anthony Archer-Wills. The pond, which has recently been restored, has a gentle, informal feel to it, though its geometry and proportions are consistent with the flowing lines of the rest of the garden.

As second, smaller circular pond was dug at the top of the garden in front of Joyce’s Cottage.  John often used a circular pond in his designs to connect the geometry of the garden he was creating to the landscape beyond.  In 2018 he cleared all the beds around the Circle Pond, leaving it to punctuate the lawn with a clear geometric shape reflecting the semi-circular sun porch of the Cottage.

Why The Garden Is Important

Much of the fascination of the garden here is that it is a modern country garden now in its maturity. Over the years Mrs. Robinsons plantings have been fused with an overlay of my own. I believe it to be an influential garden since I’ve been working with naturalistic plantings into gravel – now such a popular strand of contemporary gardening throughout the time I have been here.

Denmans Garden tells the story of the twentieth century in Britain, beginning the century as a Lord’s garden, changing hands and being neglected between the wars, transformation into a market garden during the years of rationing following the Second World War, and its evolution into a contemporary, naturalistic garden towards the end of the century.  Made famous as the home of John Brookes MBE, it is also an example of the trends in planting and landscape design that emerged towards the end of the century, and remains a unique, influential garden for students of design and homeowners alike.