We are now in the month of March here at Denmans, and after what has been a mild winter (calendar wise December- February), lots of growth and flowers abound the garden, many ahead of their natural spring flourish.

We still therefore need to keep an eye on the weather for potential cold snaps and damage, not withstanding the exceptionally wet February here and nationwide that has broken all-time records!

Spring is when the camellias really come into their own and we have some beautiful specimens.

In January I mentioned that Camellia “ Cornish Snow” was starting to flower as our earliest form. It is still going strong now into March. 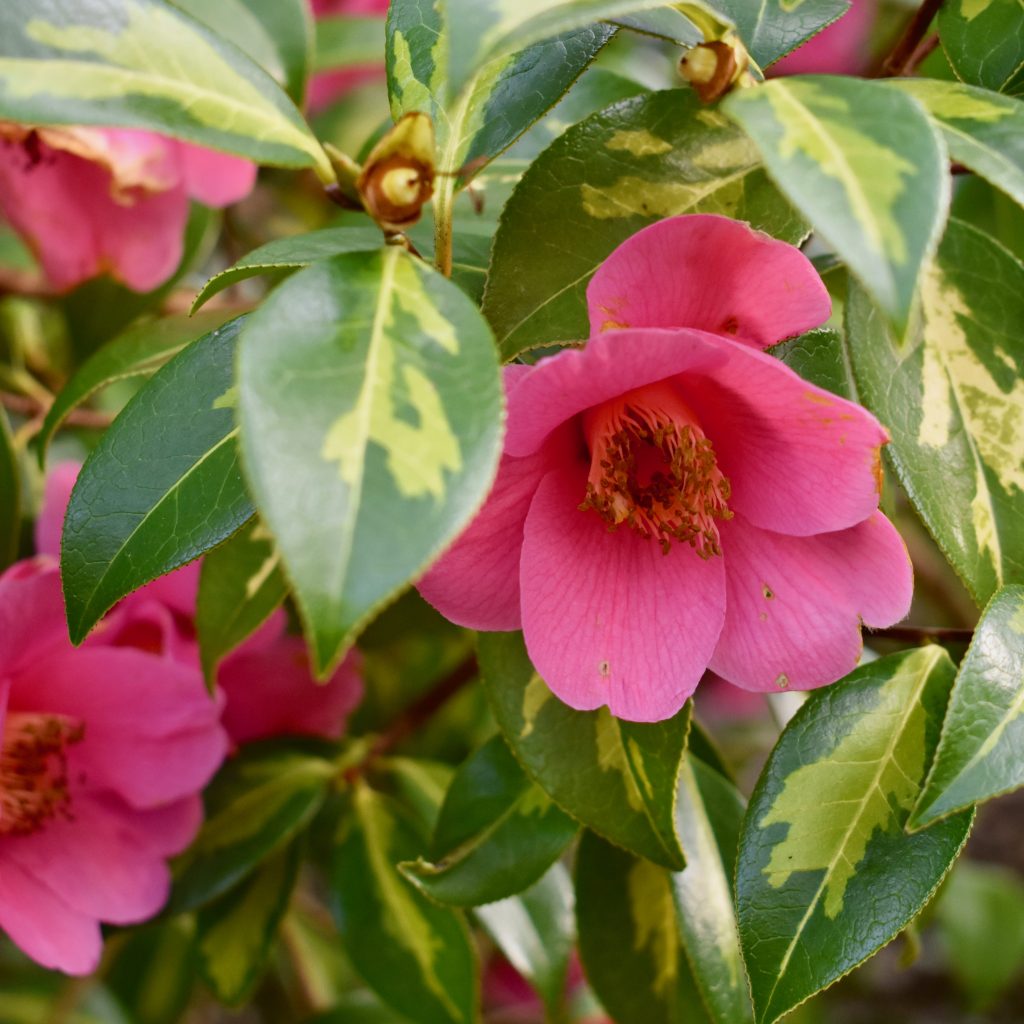 variegated leaves with dark pink flowers.  This really comes into its own in a dappled shaded position.

Another fantastic camellia is Camellia japonica “Adolphe Audusson”. We have two huge specimens of this in the garden, one near Clock House and the other against the west flint wall on the south side of the cottage. 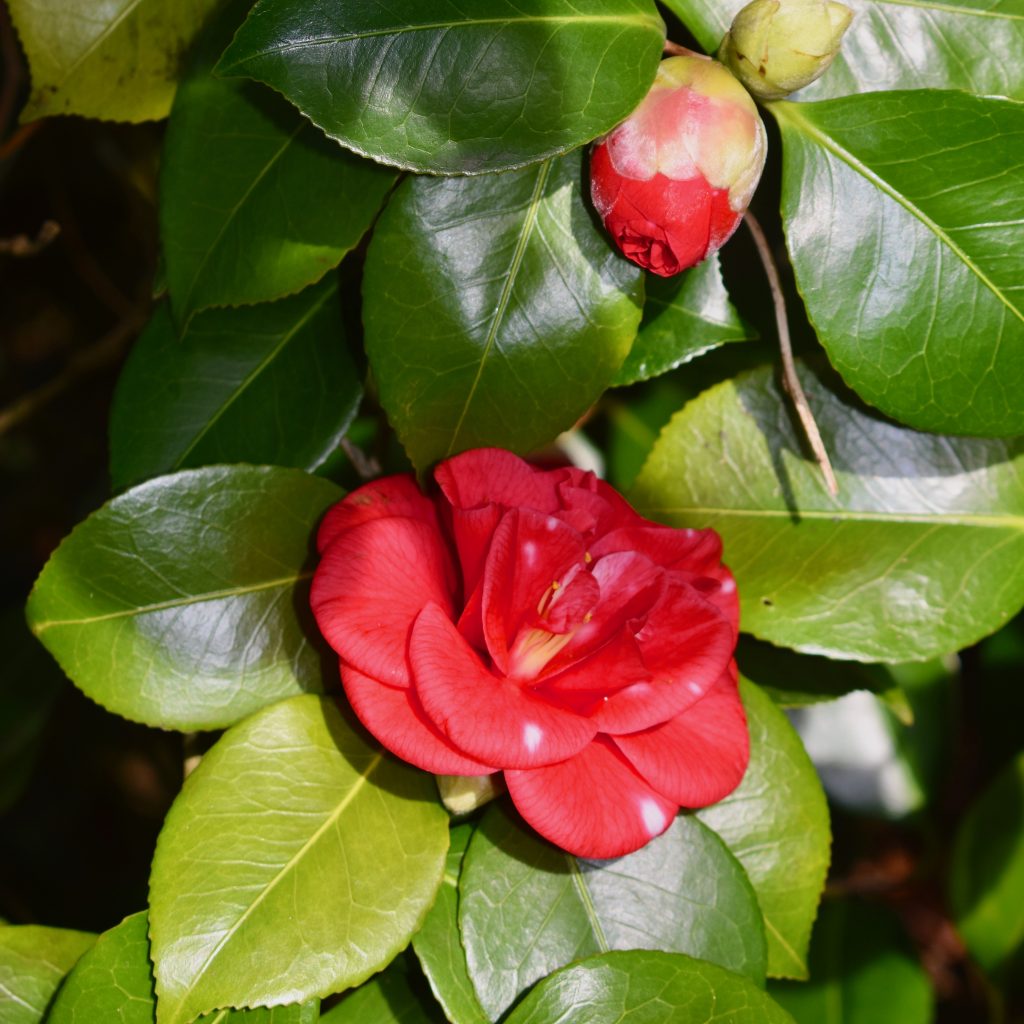 This camellia is a double red flowered variety that also has very random white flecks splashed on the red petals.

Last year we planted one or two specimens of Camellia x williamsii “Jury’s Yellow” which has white petals and a lemony yellow anemone form ruffled centre. It really is an outstanding form!  We still have two plants left for sale in our plant centre full of bud and flower, if you are really quick!

I think I have mentioned previously John Brookes’ love of yellow flowers in the garden. As well as the many forms of yellow daffodils now out in all their splendour, we have some very nice shrubs and trees that have started to flower and will be out through March.

Acacia dealbata (Mimosa) is still going strong and is so visible when you stand back and look from afar. 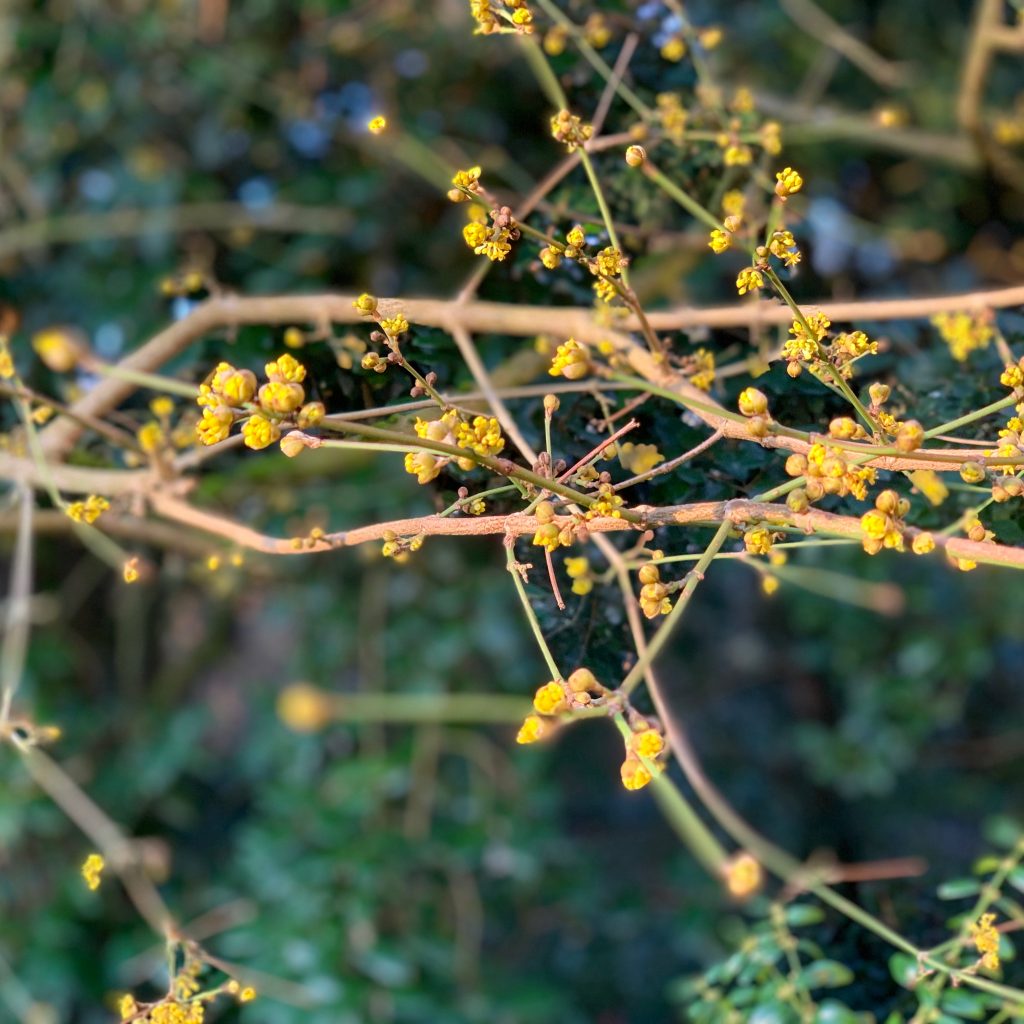 Cornus mas is an early bloomer at Denmans. 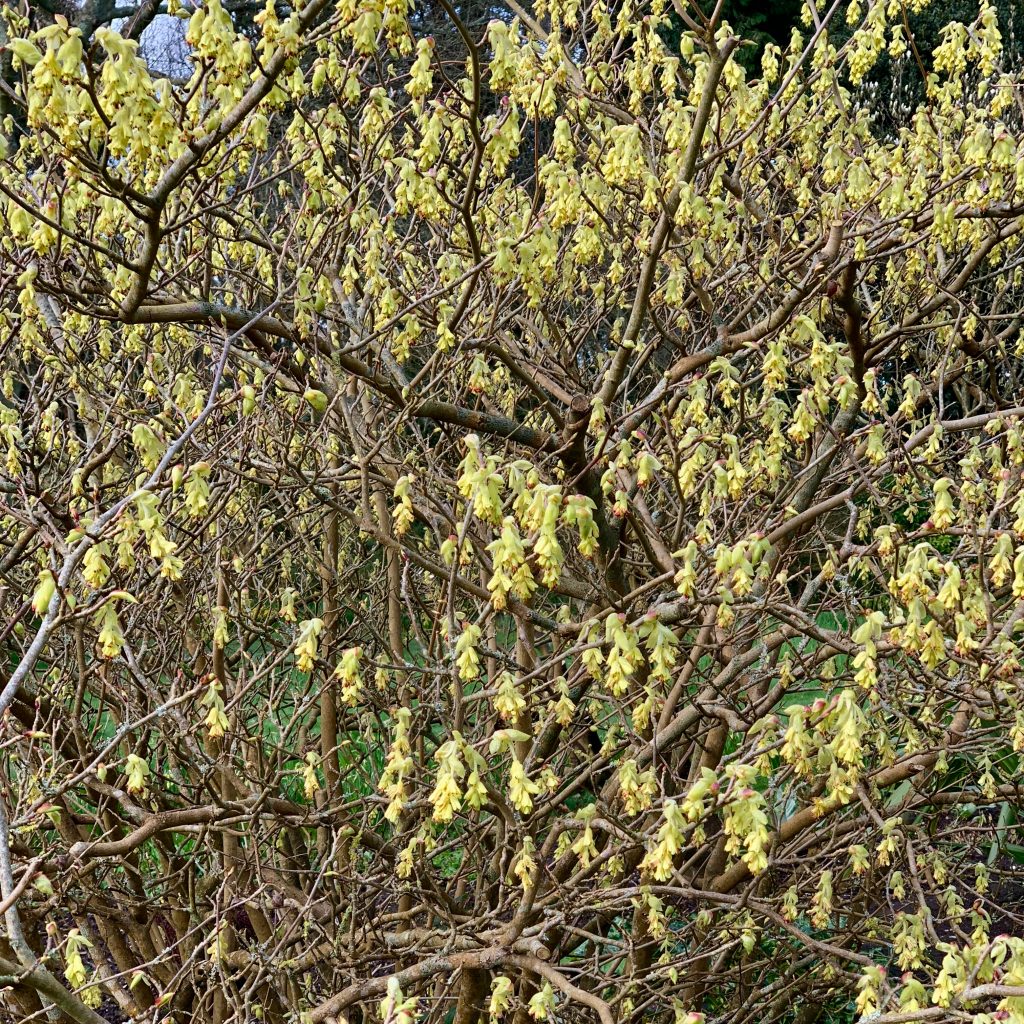 The light yellow flowers of Corylopsis pauciflora graces the top of the dry stream bed.

By the dry gravel stream bed we have a stunning specimen of Corylopsis pauciflora with pale yellow flowers with burgundy droplets on each end of the petals. 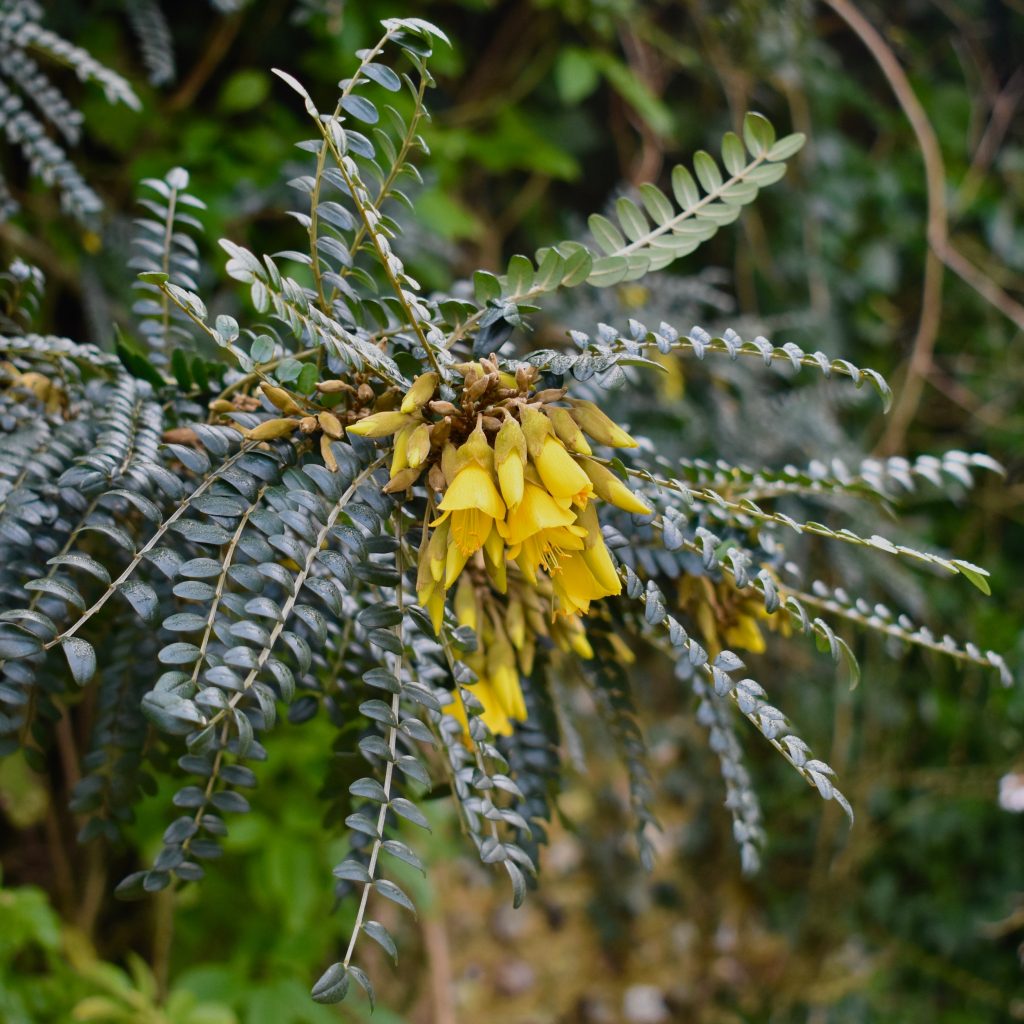 Sophora microphylla “Sun King” is an exotic surprise near the Walled Garden.

with the deep yellow flowers really standing out against dark green leaflets of this form.

In the garden and near Clock House we have two specimens of Stachyurus praecox , which before the leaves emerge produce beautiful long tassels of yellow flower drops. 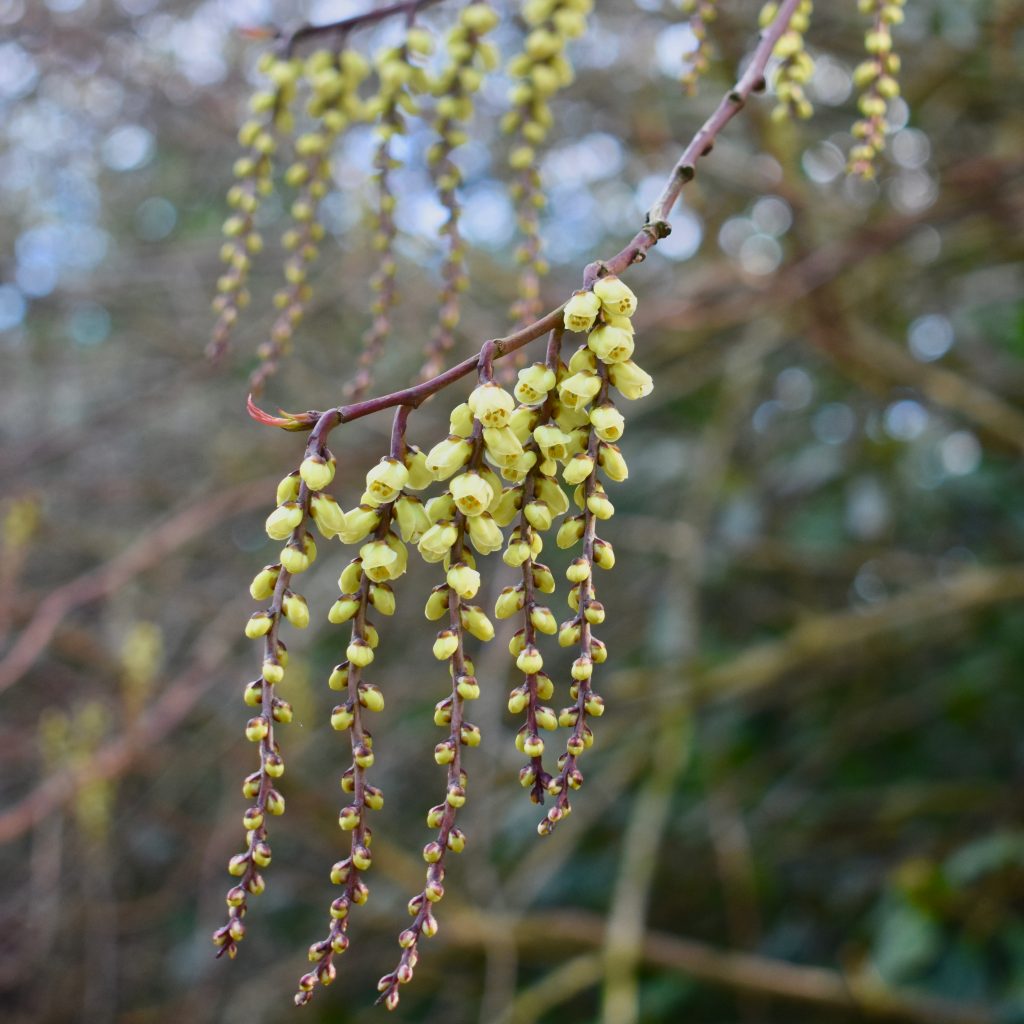 Near the one in the garden, this will be closely followed by Paeonia Delavayi var lutea (yellow tree poppy). We also have three large specimens of this in the Walled Garden.

Other notable shrubs and trees that are flowering this month including a Magnolia soulangea (frost permitting) which is a very old specimen that looks magnificent just to the north of the Cucumber house towards Clock House.

Also in flower right now is a wonderful old multi-stemmed Osmanthus burkwoodii with its wonderful scent wafting in the air, and, close by a much smaller, but still striking  Osmanthus delavayii. 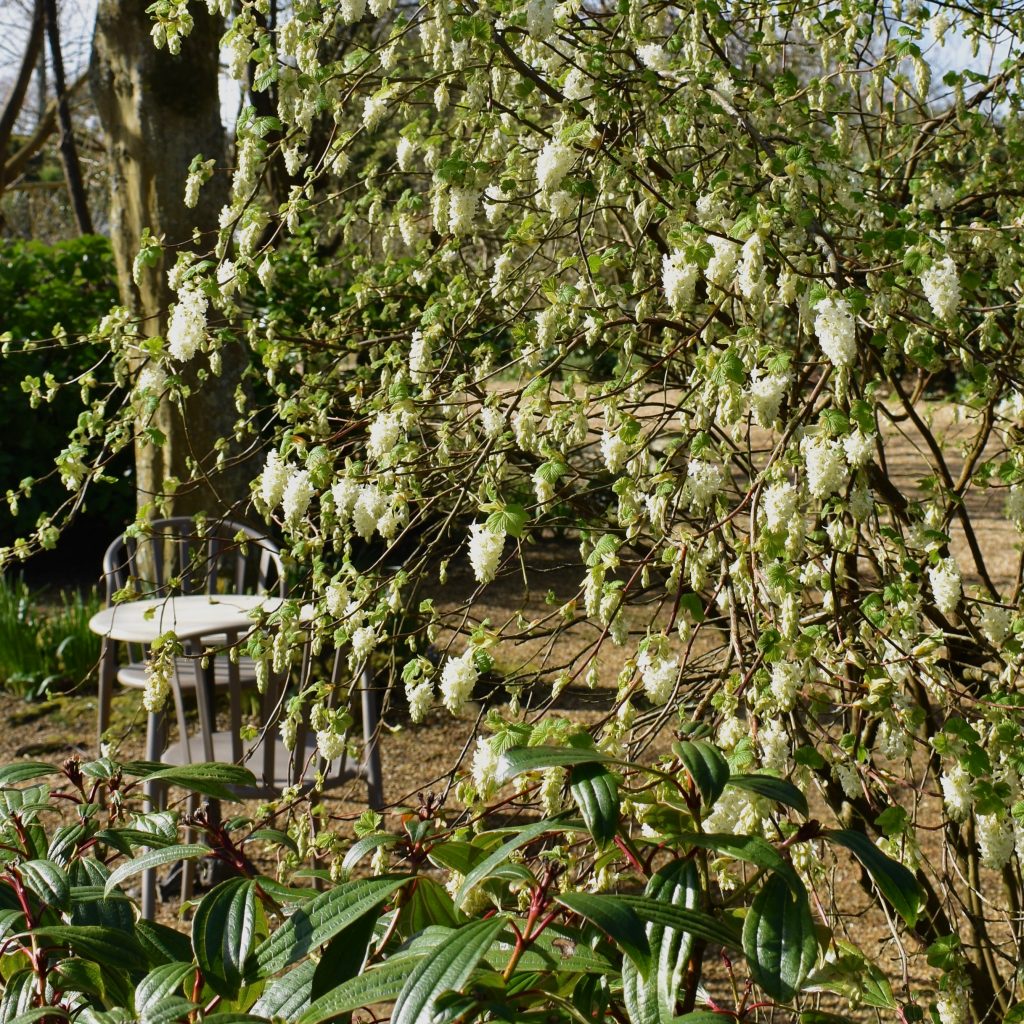 The specimen Ribes sanguineum “Elkingtons White” outside the Tea Rooms is a true harbinger of spring.

Near the Tea Rooms is Ribes sanguineum “Elkingtons White” with its blackcurrant scented foliage and in the walled garden the dwarf Fuji cherry, Prunus incisa “Kojo No Mai” is profusely flowering from contorted zig-zag twigs.

We hope you find time to visit us this month and share with us all of the above and lots more as Spring gets under way at Denmans.