Students from St. Philip Howard Catholic School pose upon completion of their bug resort at Denmans.

As we have worked to renovate and restore Denmans, we have been delighted that in each of the last three years, we have seen more and more wildlife in the garden. 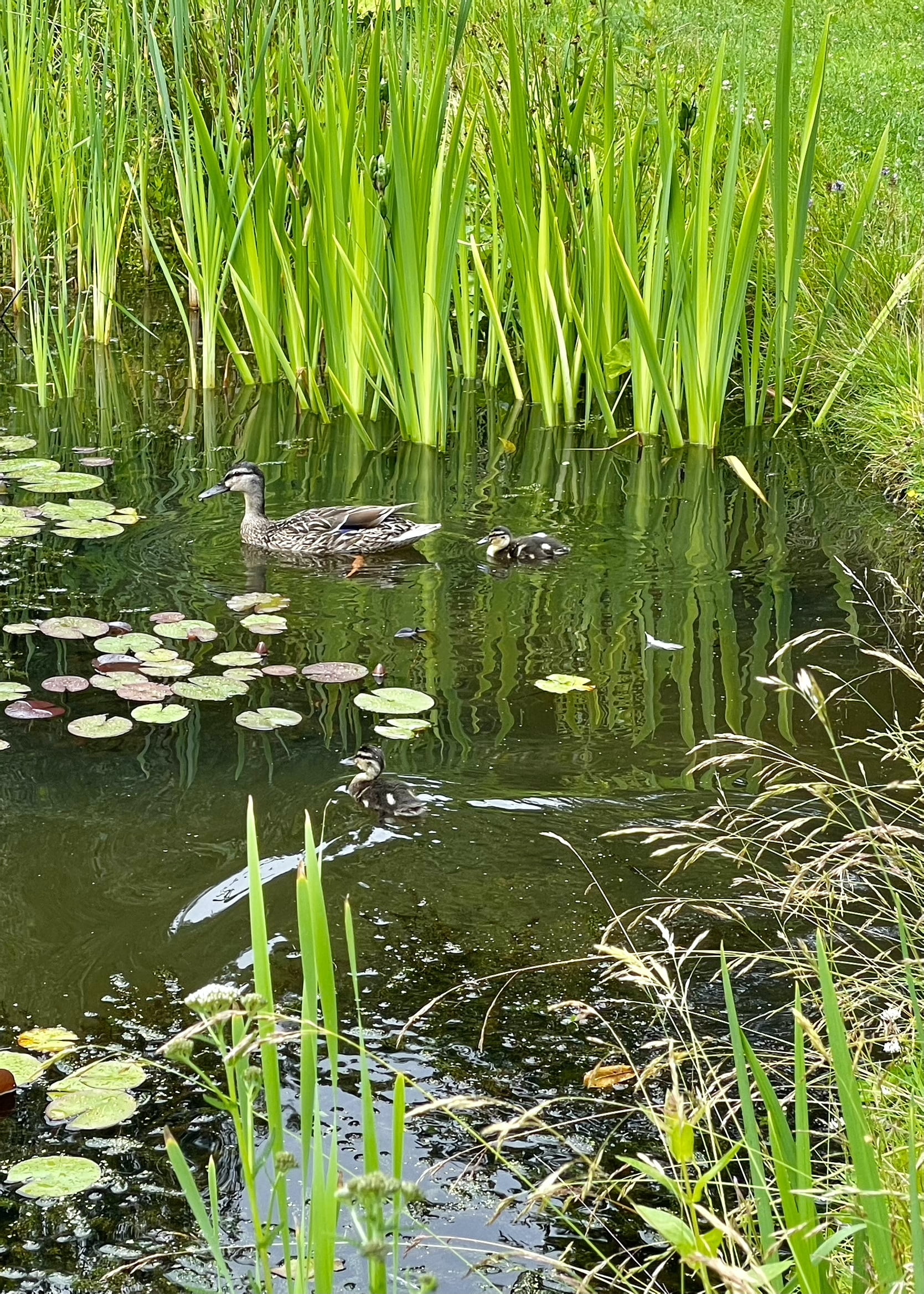 These ducklings are two of four that were apparently hatched on the roof of the gift shop.  They are now 2.5 weeks old.

It may well have begun when we renovated the pond created in 1984 by John Brookes at the bottom of Mrs. Robinson’s dry riverbeds.  It was the spring of 2018 and it seemed the instant the pond was full of water, there were tadpoles and dragonflies.  We planted the pond primarily with native Sussex water plants in order to encourage more wildlife, and one end of the pond is a beach which makes it easy for various mammals to drink in the heat of summer.  Happily, in each of years since, we have had a brood of ducklings in the pond in addition to all manner of other water creatures, including fish. 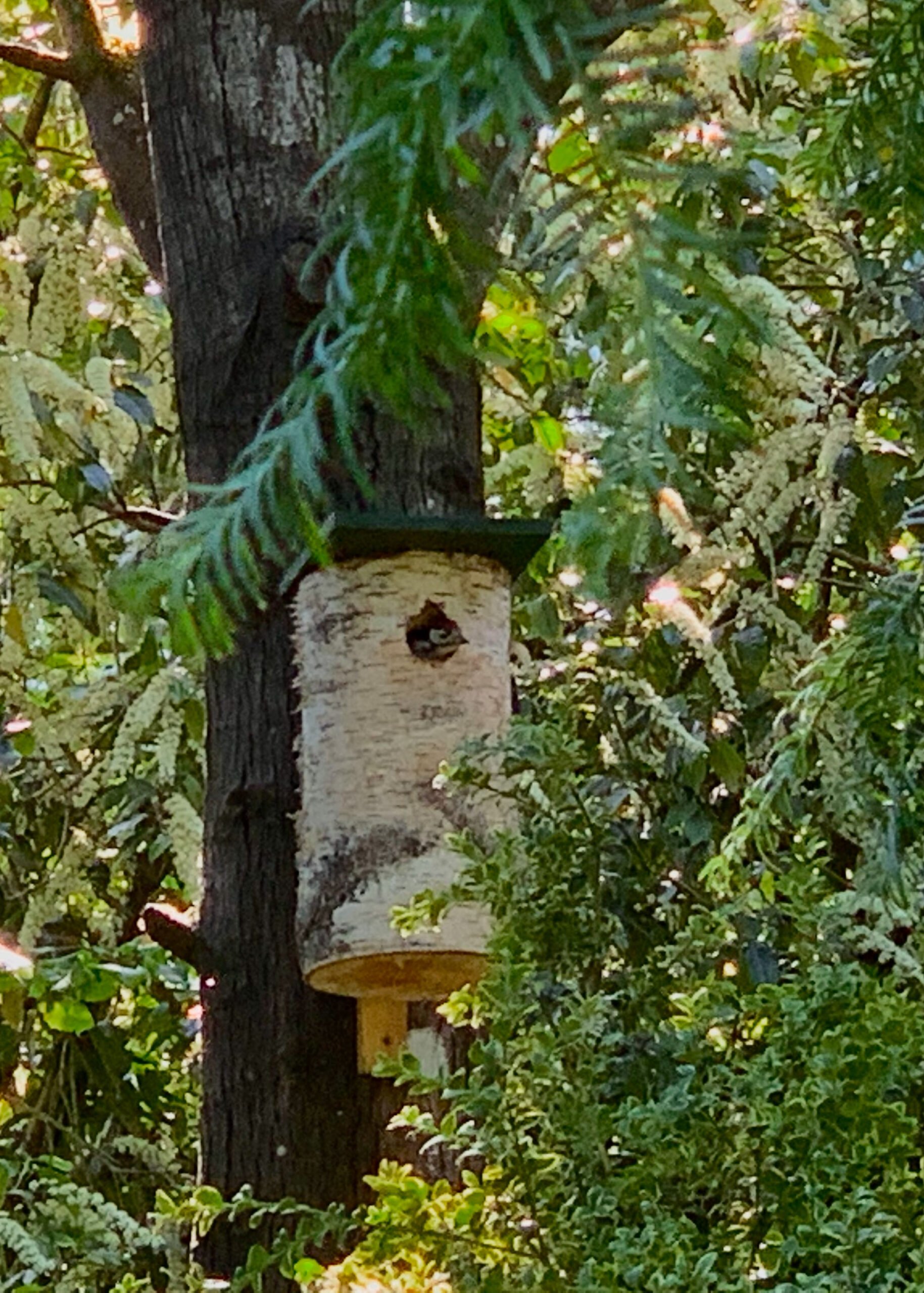 This was the last fledging out of the nest last year. It took several days before he mustered the courage to join the rest of his family.

The birdsong here has always been wonderful, the various trees and shrubs offering endless shelter and the berrying plants providing nutrition.  In addition to feeding the birds, especially in winter, we have added a number of bird boxes around the property under the direction of Karen Quinn who is in charge of increasing biodiversity here in the garden.  In autumn 2019 she added woodpecker boxes and in each of the past two years, greater spotted woodpeckers have chosen to nest in one of them.  We have had recurrent sightings of the more elusive green woodpeckers feeding on the lawn. And we have had pheasants that nest well hidden in shrubberies in the garden.

This year an owl box will be hung, and we hope that one of the owls we have seen and heard around the property will join our growing menagerie.

Hedgehogs made themselves known early on, which was tremendously exciting.  Who doesn’t love a hedgehog?  We believe they have made their home in a long, tall pile of branches and other scrub that were piled over the years along the fence on Denmans Lane.  This area is the Nut Walk, which we are hoping to re-open to the public in the next year or so.  We don’t want to disturb the little creatures in this pile of scrub, so we aren’t going to clear it, but it isn’t very attractive. 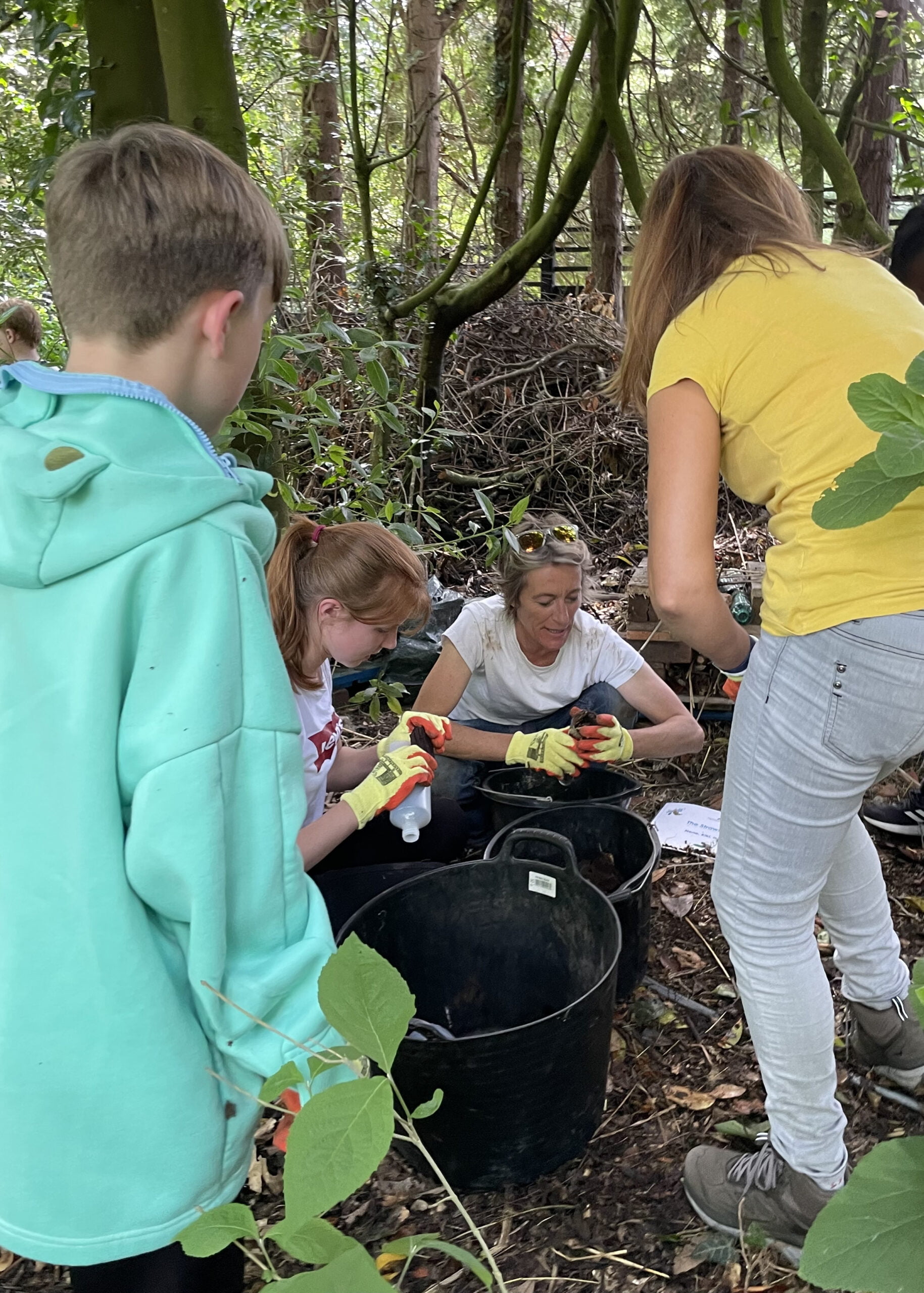 Karen working with students on the last day of the project.

Enter Karen and 15 students from St. Philip Howard Catholic School in Barnham.  Karen developed a plan to create bug hotels along this area between what will be the walk and the scrub.  Her project began with a trip to the school to teach the students about the benefits of bugs in a garden and to describe the project to them.  Built over three visits to Denmans in June, the results are fabulous.

Perhaps their teacher, Jules Hlynianski, described the project and the students’ role best in her recent newsletter:

‘On their first visit, they took wheelbarrows and trugs round the gardens and collected material that was suitable for their hotels. 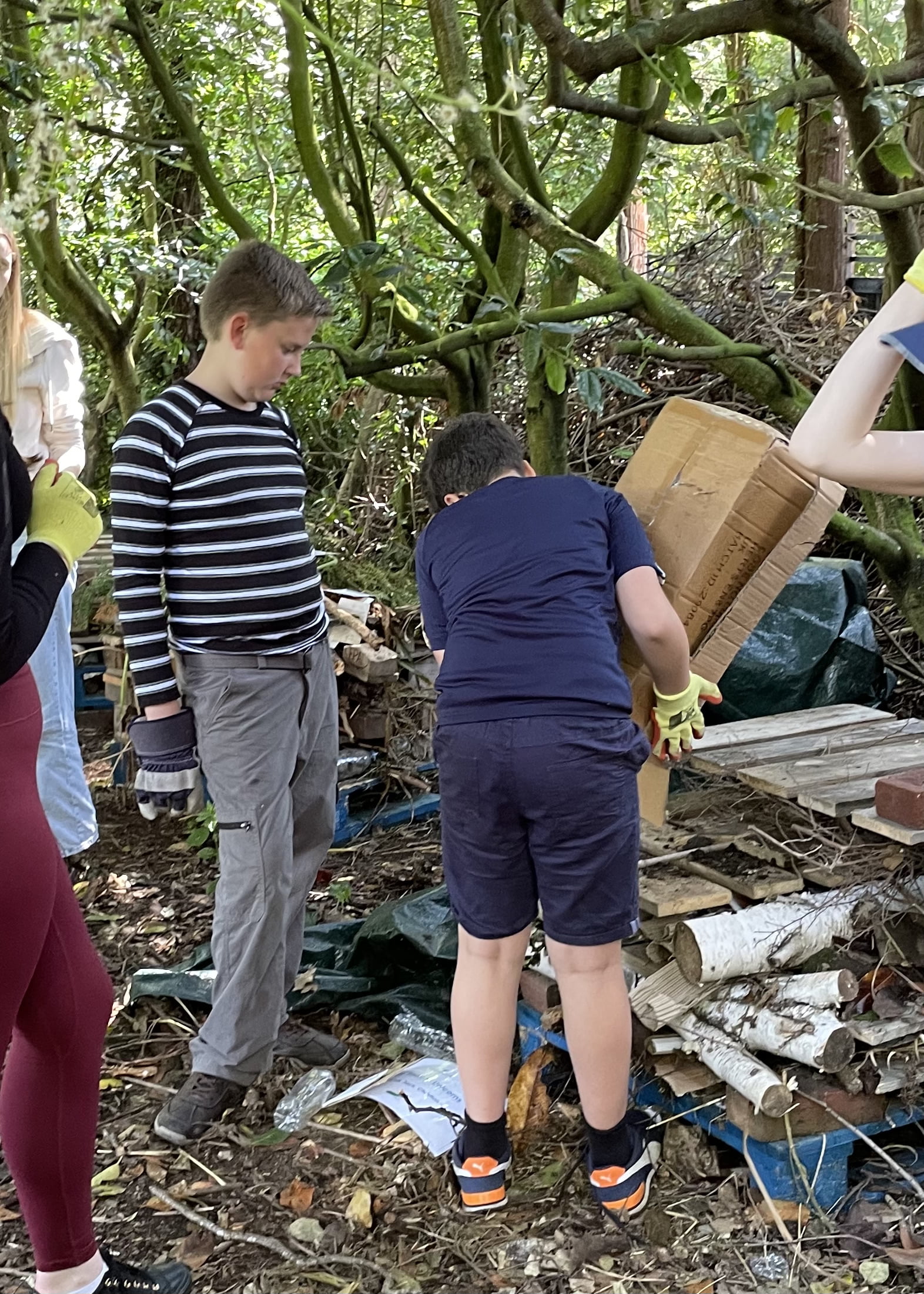 The students had a wide variety of materials to use, including cardboard and bricks.

The second visit saw the students starting on ‘the build’.  They were surprised that a number of bugs had already made their collected piles home and proceeded to take care to layer each pallet with a range of materials.

The hotels were finished off on the 28th June and the students were quite rightly very proud of their builds!

We are currently holding a competition to name each hotel.  The names that have been put forward so far are Bug Inn, The Great Bugsford Hotel and Evergreen Inn. 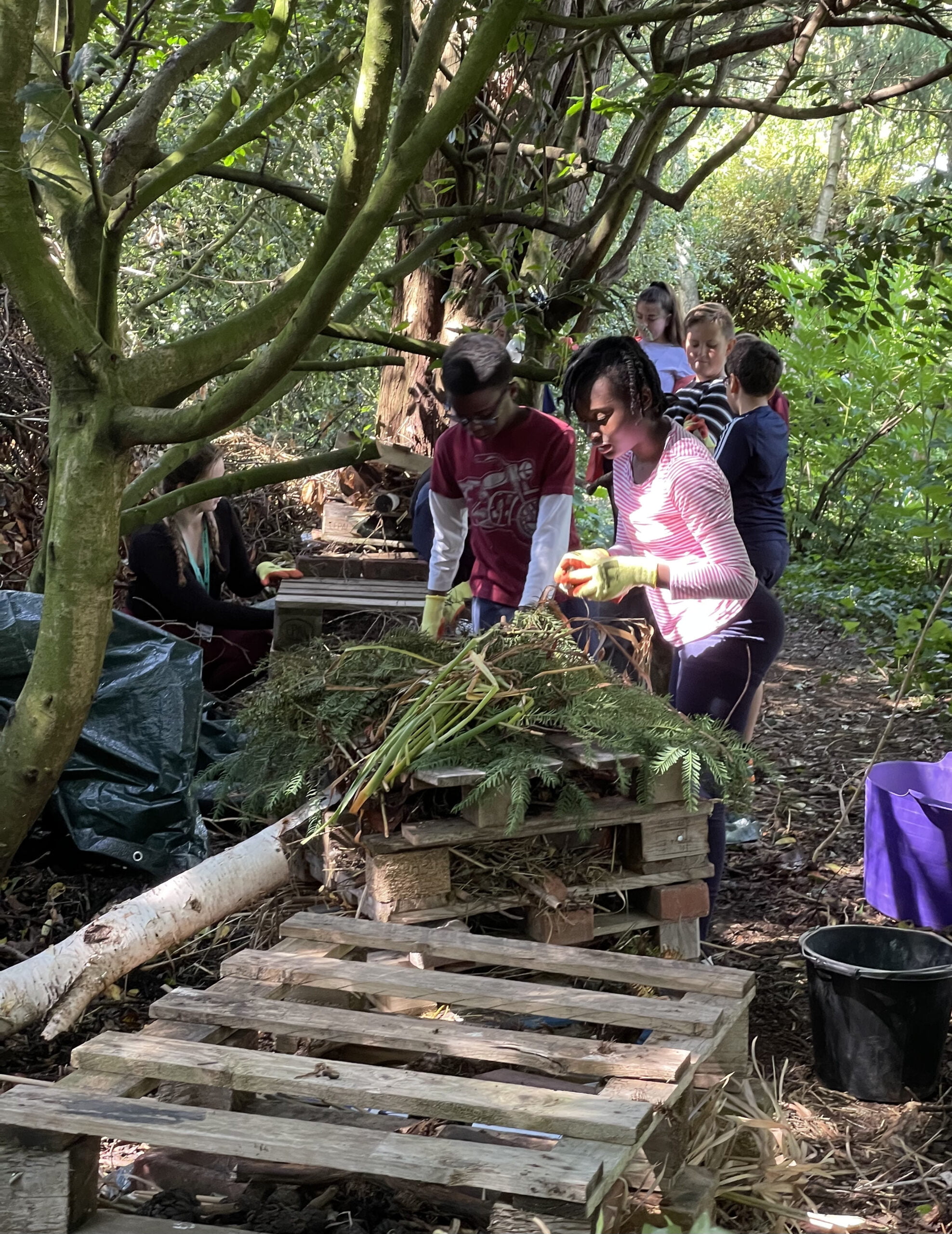 Arranging each layer of material so that the next palette would lay flat was challenging.

Morgan really enjoyed the teamwork involved in building the hotels and also how all the components needed to build their hotels were laid out around the gardens for them to find. It allowed them to explore the gardens which Morgan found really cool!

Ollie found building the hotels really good fun and thoroughly enjoyed the project.  He loves nature so was fascinated watching the dragonflies on the pond and the other wildlife living in there.

Emma also found building them really fun. She loved being outdoors even if it was raining and thought the gardens were really pretty.’

Built of palettes cut in half, the bug hotels – it’s a resort, really – are sturdy and we look forward to seeing what they attract in the coming years.

We really hope that our hedgehog population increases as the insect populations grow and diversify.