The overgrown shrubs behind the stone doves between the Cottage and Clock House have been the focus of December’s rejuvenation project.

This winter blog will focus on elements that I have blogged about before at this time of year….. namely that this is when us gardeners will try and do any remedial/aesthetic and maintenance-led pruning on trees and shrubs that we feel need it for the aforementioned reasons.

The copse between Clock House and the Cottage (Denmans) is being rejuvenated this winter.

Between the north side of Joyce Robinson’s Cottage and John Brooke’s Clock House residence, there has been an untamed copse growing for many years of various trees and shrubs with a scattering of perennials to the forefront of the eastern borders.

Back in 2017 John began to reclaim the bit nearest Clock House by opening up the view from his front door diagonally through to the huge Magnolia × soulangeana to the north of the Cucumber House. 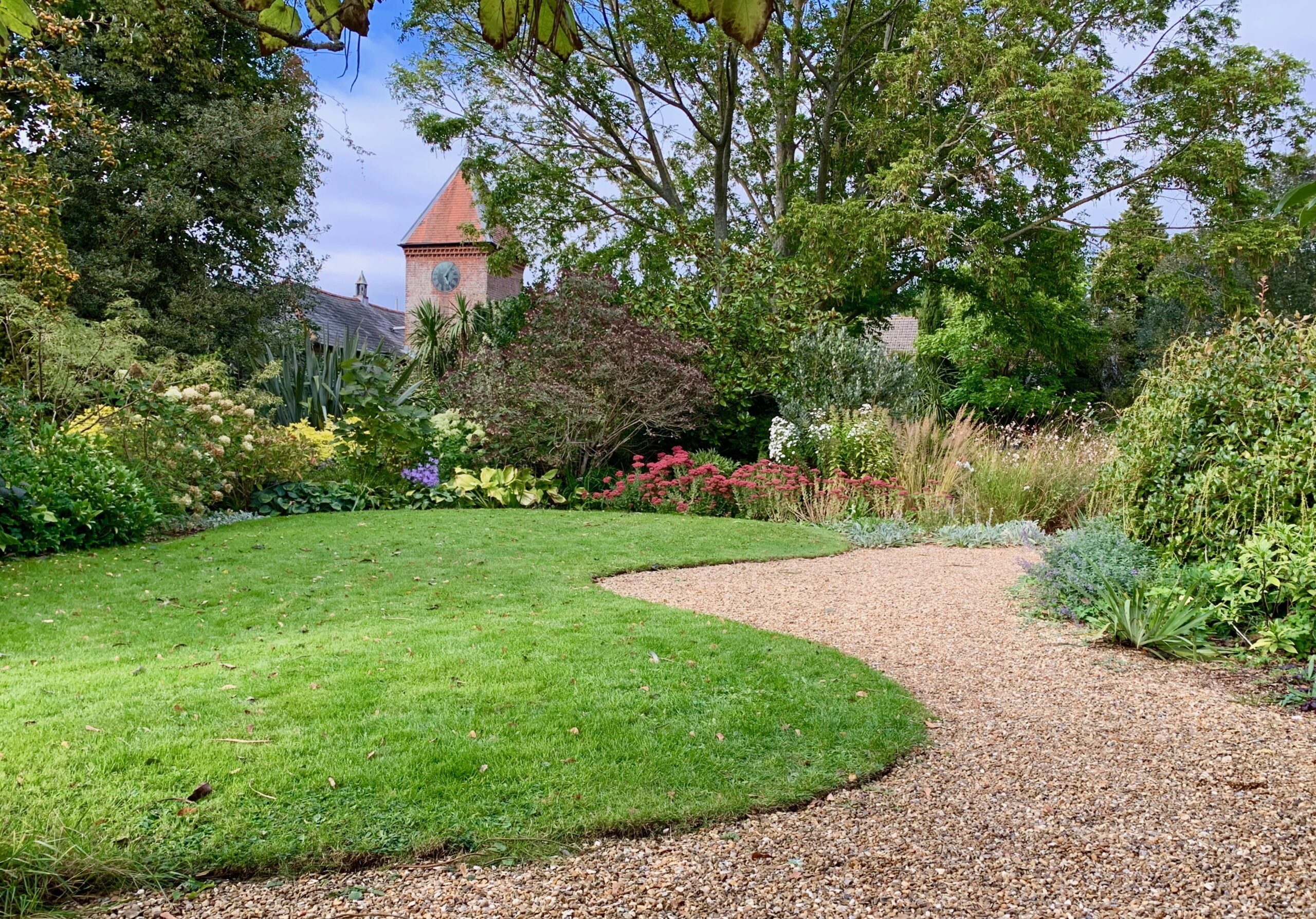 In 2017 John had bamboo and other shrubs and trees cut back to to open this view to Clock House.

This involved removing a massive clump of Pseudosasa japonica bamboo, cutting down a purple leaved Catalpa, moving a Hydrangea aspera, and replanting/positioning new and old perennials/shrubs.

Also before his death in 2018, he had me cut down swathes of shrubs and trees adjacent to the path on the Cottage’s north side.

Both of these areas have re-grown and been tended to by us since, but the main structure of this area in the middle has been left undisturbed.

It started with Gwendolyn suggesting that 3-4 individual clumps of Philadelpus coronarius aureus be cut right back as they had grown up amongst the yellow fruited crabapple( which could be Malus ‘Golden Hornet’?). 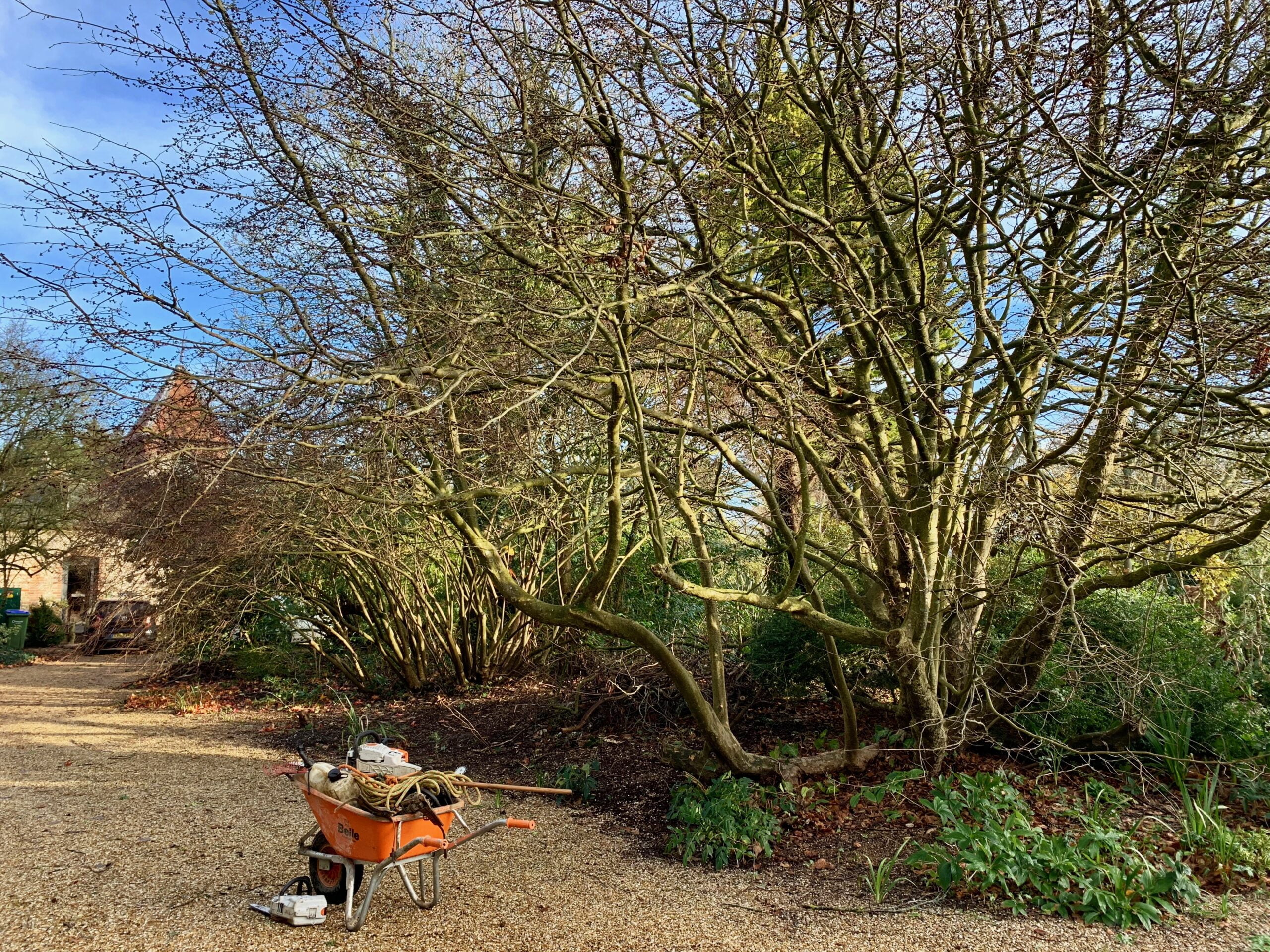 We have been cutting overgrown laurels and eleagnus back to expose the Parrotia and Stachyurus Mrs. Robinson planted in 1948.

That suggestion led to us taking the bull by the horns and addressing the whole area, pruning back years-old growth, each tree or shrub being assessed as we progressed to achieve a balance of height/spread and the kind of natural look we desire and of how we think it would have tended to look in both Joyce’s and John’s eyes.

In this area we found a variegated Eleagnus maculata pungens that had developed huge contorted stems that twisted and turned whilst also climbing up and growing among the huge Parrotia persica (possibly a champion tree in England?) and a wonderful Stachyurus praecox (a favourite of Joyce’s), both planted in 1948.

The latter was also dominated by several out of control Portuguese Laurel ( Prunus lusitanica) which we are convinced were meant to be low-level evergreen screening bushes.

About two foot from where the Eleagnus starts, there is a Cercis silaquastrum (Judas tree).

This was forced to grow along the ground for about three metres as it sought light to grow before reaching upwards! Quite incredible!!

One fantastic result of this initial clearing has enabled us to see through to the fiery autumn colours of the majestic Liquidambar styraciflua on the entrance to Clock House on Denmans Lane, from lawn in front of the Magnolia soulangea. 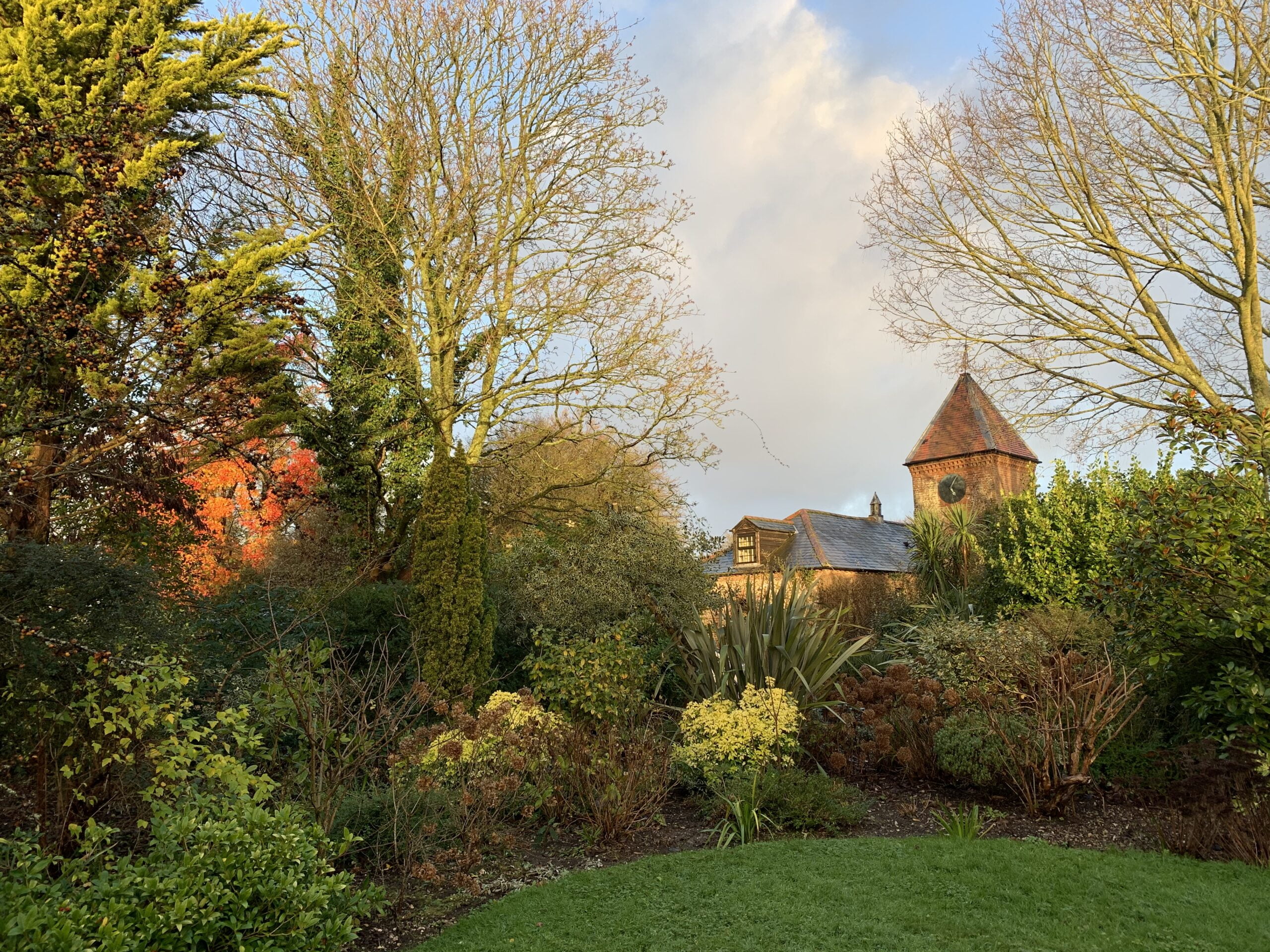 By working carefully and systematically we have re-opened views and now the blazing Liquidamber on Denmans lane is visible from the path.  It usually drops its last leaves on Christmas Day.

As previously blogged, not dropping its leaves until Christmas Day (quote, John Brookes)!

Not this year!! The leaves were still clinging on.

Other trees and shrubs we have worked on in this area have been Viburnum rhytidophyllum, Eucryphia lucida, Ilex aquifolium marginata, Buxus sempervirens, and Griselinia littoralis.

This area will be an ongoing project over the next couple of years as we carry on pruning and tweaking, but to say we are over the moon and excited by what we have achieved thus far would be a massive understatement.

It is already transformed into something beautiful and along with some careful work on re-defining the original border of the grass-edge lines by Gwendolyn from researching original drawings, and then carefully executed by my colleague Karen, we feel we have discovered a new “garden”! 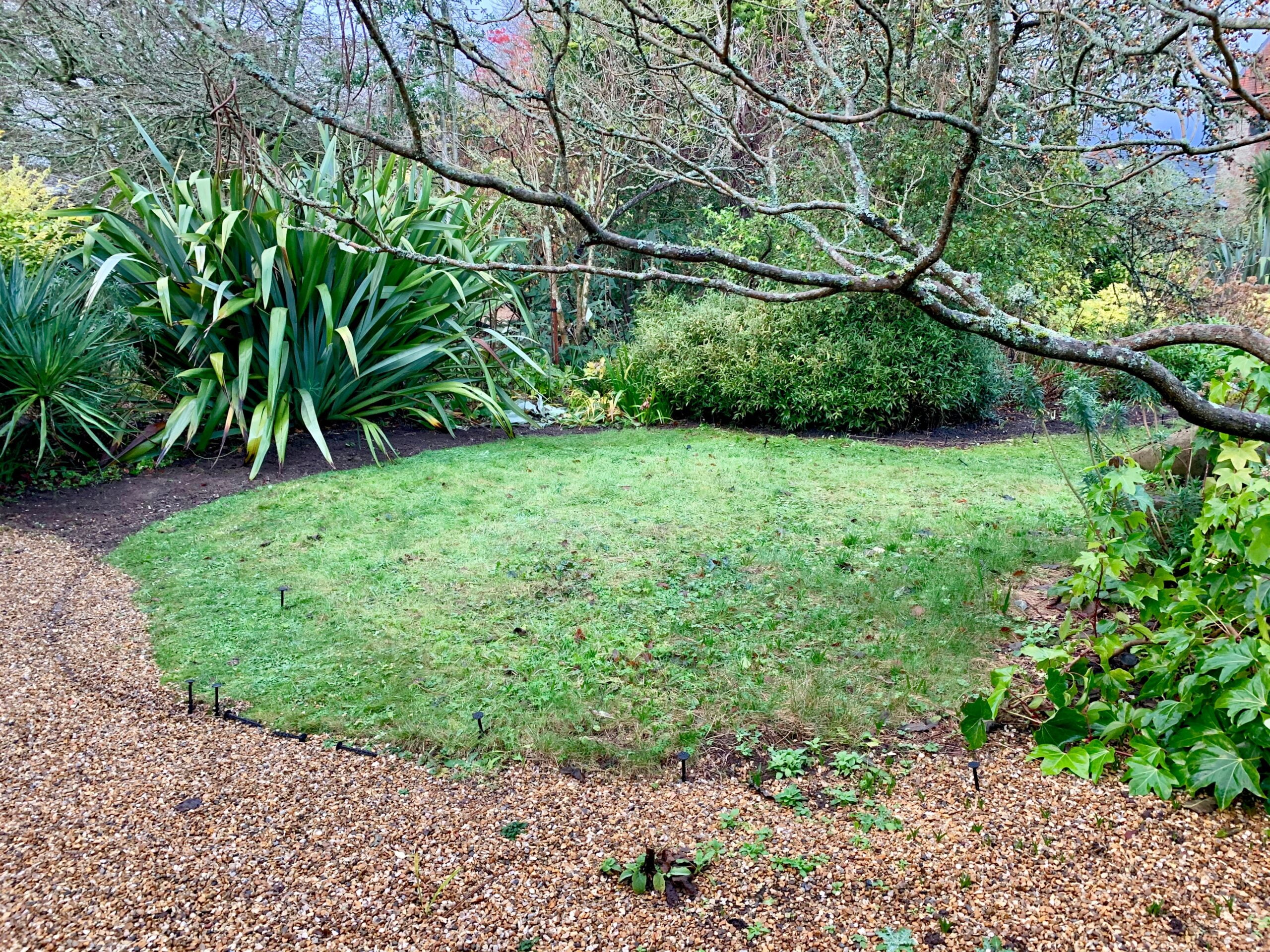 Using the most recent plan of the garden we are restoring some of the bold curves that John laid out, not just here but in other areas as well. 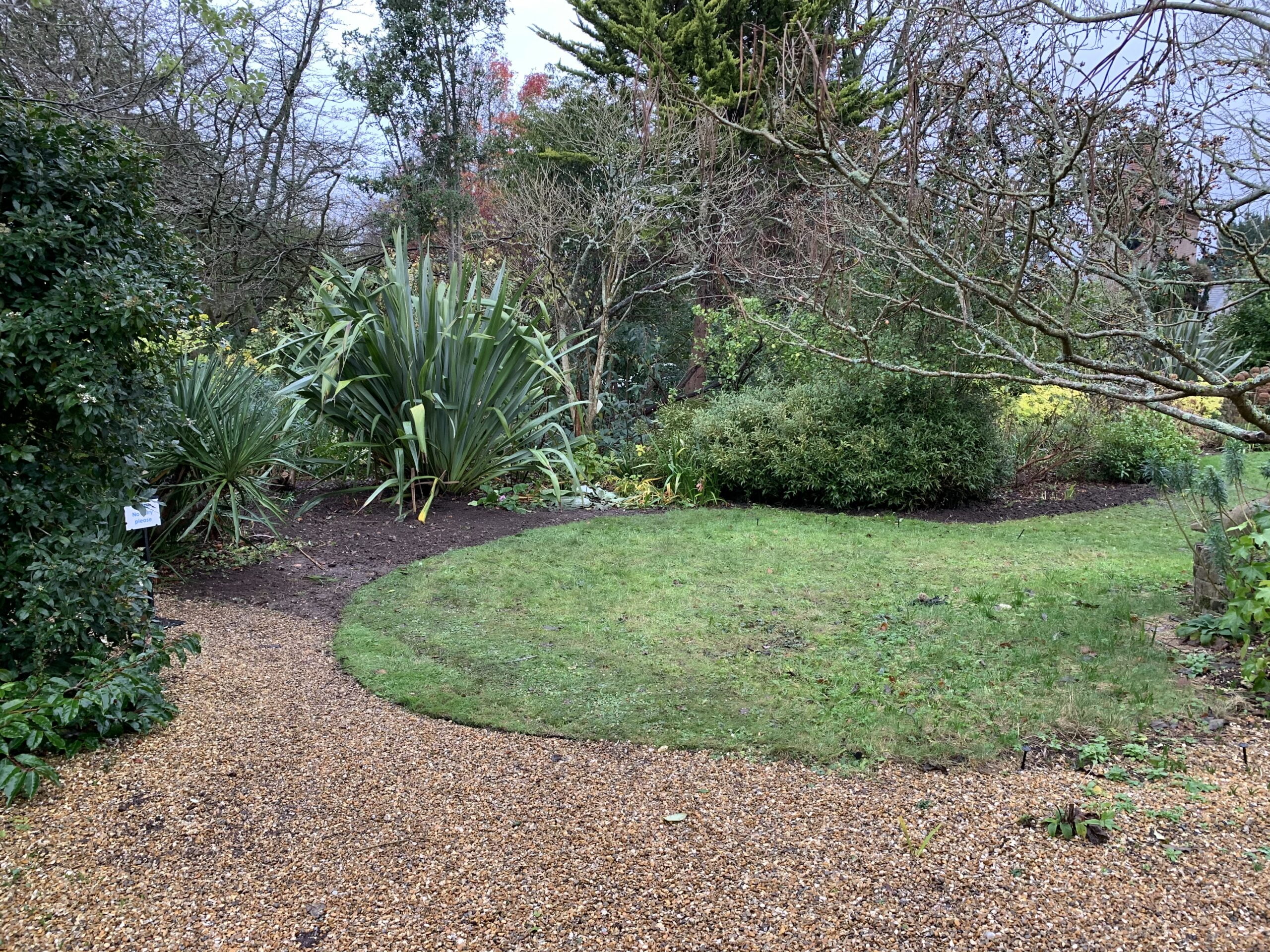 We will ultimately be detailing all the plants in this area as part of a plan to detail all the main plants in Denmans gardens.

When you are able to visit we hope you will be amazed by this part of the garden in its new early days and watch it grow with excitement as we will.

Click here to read John’s blog about how to rejuvenate your shrubs!