Here at Denmans we welcome in the month of May and the garden is absolutely bursting with life and colour.  Nature is most certainly not in lockdown!

We have four different forms of Wisteria sinensis in bloom at present: 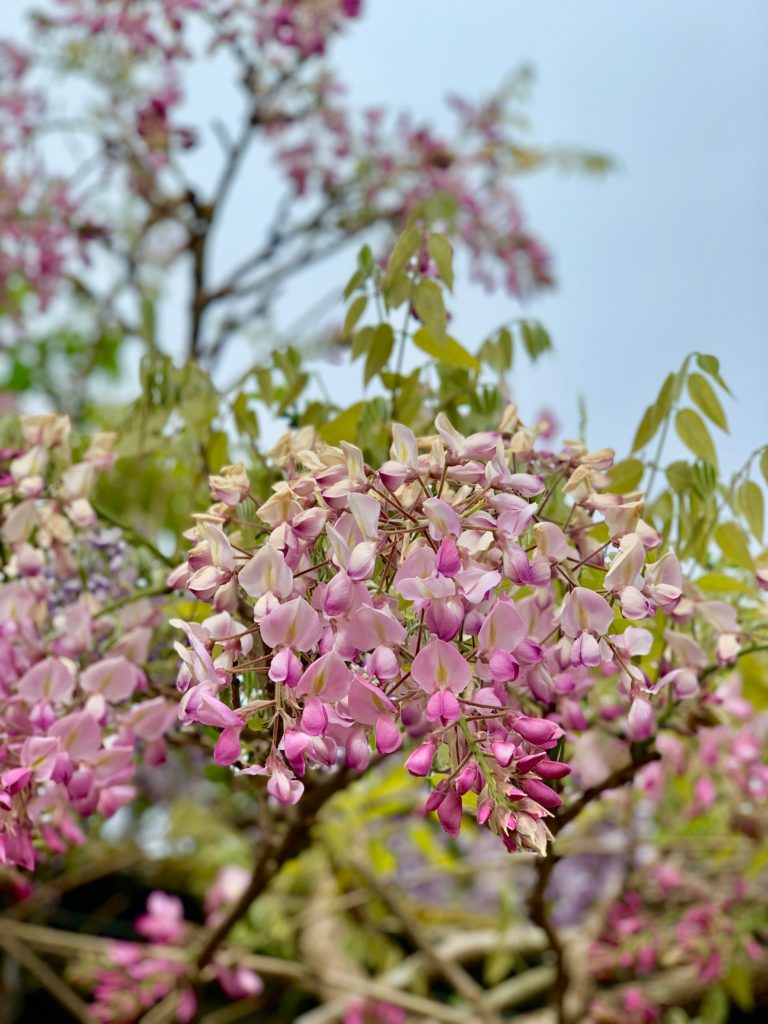 This pink wisteria is blooming for the first time in many years, its rosy racemes appearing through the purple wisteria at the entrance to the Walled Garden.

A lilac form over the entrance into the garden; a pink form that has appeared out of nowhere to nestle in amongst the aforementioned lilac one; a bluer form is trained over the flint in the Walled Garden to hang gracefully above the edge of the border and brick circle that we recently exposed; and, finally, we have a white form being trained up the wall of the cottage on the south side.

All of these have, for the last couple of seasons been worked on to create their show at this time of year and we still have work to do on them.  It is very important to create a framework for a wisteria for the space and position that you have allotted it.  Once you have achieved that, it’s careful annual pruning in late July ( to reduce new growth back to the framework), and then, more important, pruning in January to cut out any new growth back to the main stems and branches of the wisteria plus cutting back the small flowering stems back to 1-3 buds.

The pea-like flowers of the white wisteria trained on the south side of the Cottage is tinged with a soft pink.

Our new found pink form and white form were left unpruned and free to grow unchecked for too long and will require more attention in the next two seasons to re-establish their framework where we want it.

Elsewhere a very special plant at Denmans is just finishing its show in the Nut Walk and that plant is Smyrnium perfoliatum (perfoliate alexanders). It is a biennial that in the second year produces stout green stems with acid yellow basal foliage and cow parsley type flowers of the same colour, which also from 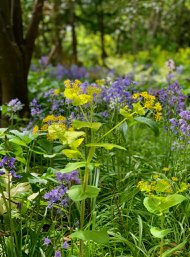 Resembling euphorbia in habit and colour, perfoliate alexander brightens up dark areas in the garden.

distance give it the appearance of a euphorbia.  En masse it looks like a one-foot tall floating airy carpet which, with the colour, brings a wonderful glow to partially shaded areas.  It looks best in large plantings and you will need to be a little patient as the plant is monocarpic (dies after flowering), but produces copious amounts of seed to start the process again — well worth the wait.

This plant has started to encroach the gravel paths in the Nut Walk and we may be able to lift year old plants for transplanting elsewhere.

The gravel paths in the Nut Walk were created by Joyce Robinson in the early 1970’s, not by overlaying a flat area with gravel in which to plant, but by removing existing shrubs and trees and then spreading gravel around them to create a natural path through existing planting.  In addition to allowing for a new part of the garden that looked and felt as if had been there all along, it permitted her and visitors to walk among the shrubs and examine them closely… very clever and pioneering!

Other seedlings, such as Hellebore orientalis are allowed to creep onto the edges of this path. 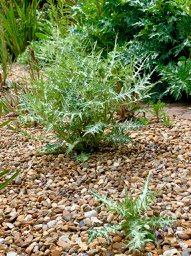 Silybum adans self-sows freely in the Walled Garden, its prickly variegated leaves making a pleasing show against its neighbours.

Elsewhere, in the Walled Garden for example, where Joyce started her first gravel garden fifty years ago, we have plants that have purposely been allowed to self-seed in the gravel and are well worth growing and ones we love.  Among them are Silybum adans (milk thistle), Onopordium acanthium (Scots thistle), Oenethra biennis (evening primrose), Alchemilla mollis (lady’s mantle), and Anthriscus sylvestris ‘Ravenswing”.

At this time of year, I have a particular love and appreciation of plants, shrubs and trees in shades of purple.  Their foliage as it emerges in spring is at its most intense colouring.  In our garden the effect both close-up and, in the context of a John Brookes garden, from a distance, is beautiful as the purples bring out the grey-greens and creams of variegated plants and shrubs nearby. 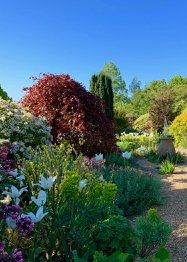 Fagus sylvatica purpureum anchors center of the Walled Garden with its dark foliage and mounded form. 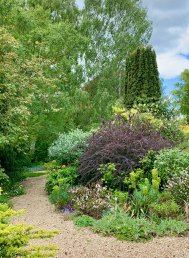 The looseness of Berberis thunbergii f. atropurpurea blends well with other softer shapes in front of the Cottage. 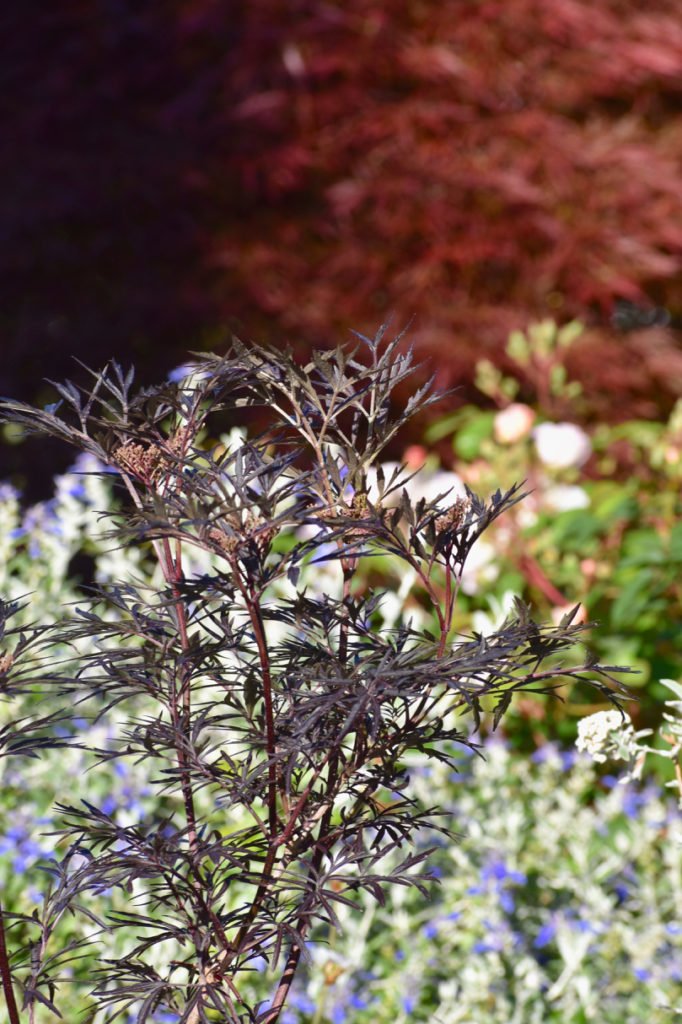 Sambucus nigra “Laciniata” is one of our favourites plants.

The above are all deciduous, so I like the purple cordyline and purple Pittosporum tenuifolium that give that shade of purplish colour through winter.

There is hope that we may see an easing of the current pandemic-related measures in the near future and I hope that means we can once again see you at Denmans.