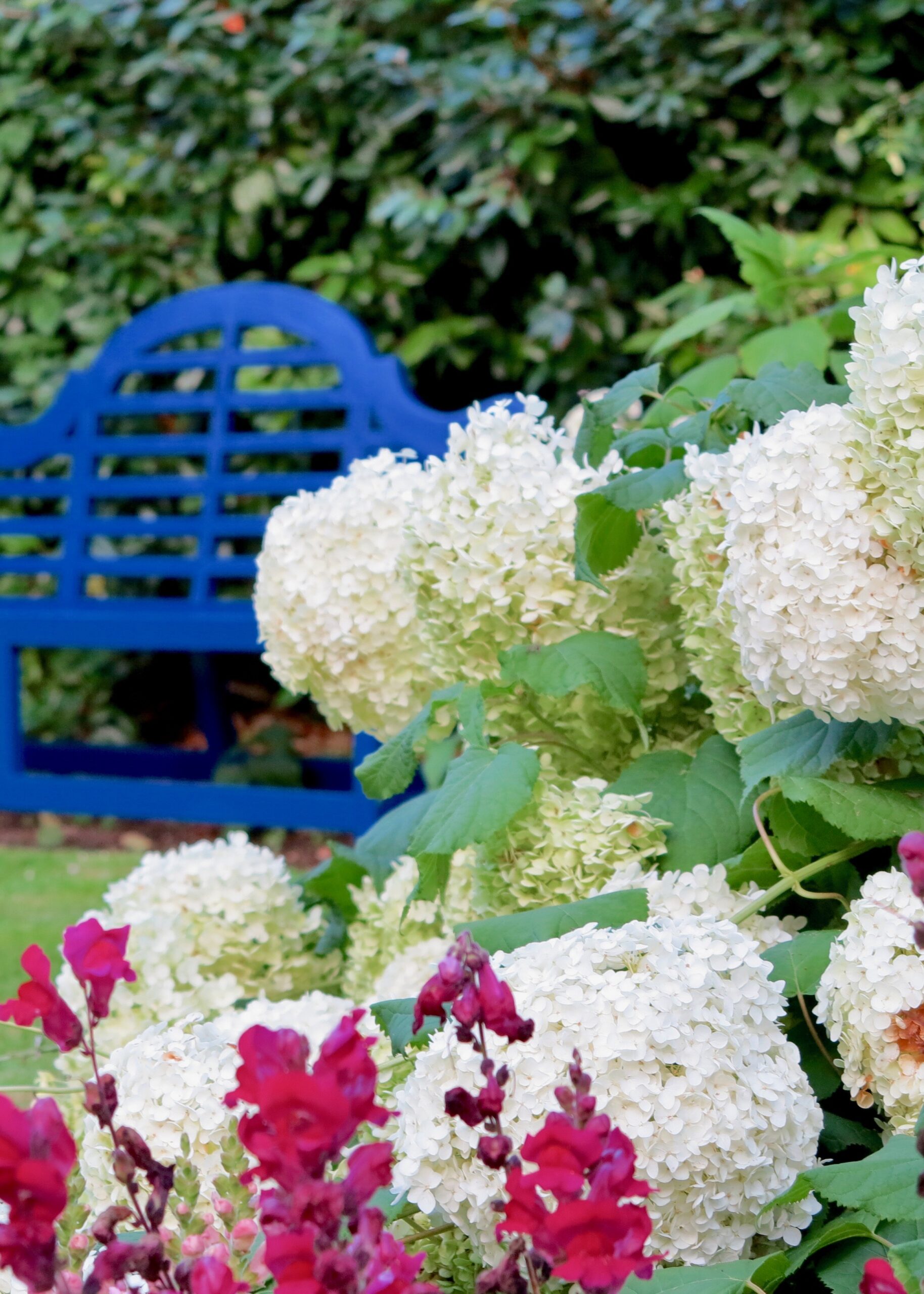 Annabelle hydrangeas were one of John’s favourite plants.

July is upon us at Denmans and we are very pleased and encouraged by the number of people visiting us in these testing times and all the lovely comments we have had…. thank you!

This blog is going to focus on flowers as there is so much colour out at the moment in the garden and it is a joy to behold.

Although in essence some people who visit will want to see individual blooms close -up as they walk around, others will hopefully (much to both Joyce Robinson’s and John Brookes’ liking) take a step back and see the colours in the various parts of the garden working in harmony painting a picture,  and with the shape and form of the foliage, etc., completing the view.

Onto some of the plants, shrubs and trees that are putting on a show now;  If you visit, look how they work with each other and their positioning around the garden.

I’ll start with one of John’s favourites which is Hydrangea arborescens ‘Annabelle’. We have several statuesque clumps of this shrubby hydrangea, which produces huge white flower heads en masse atop their stems, and are visually stunning. These fade to a creamy beige as summer progresses but look good right through to October. 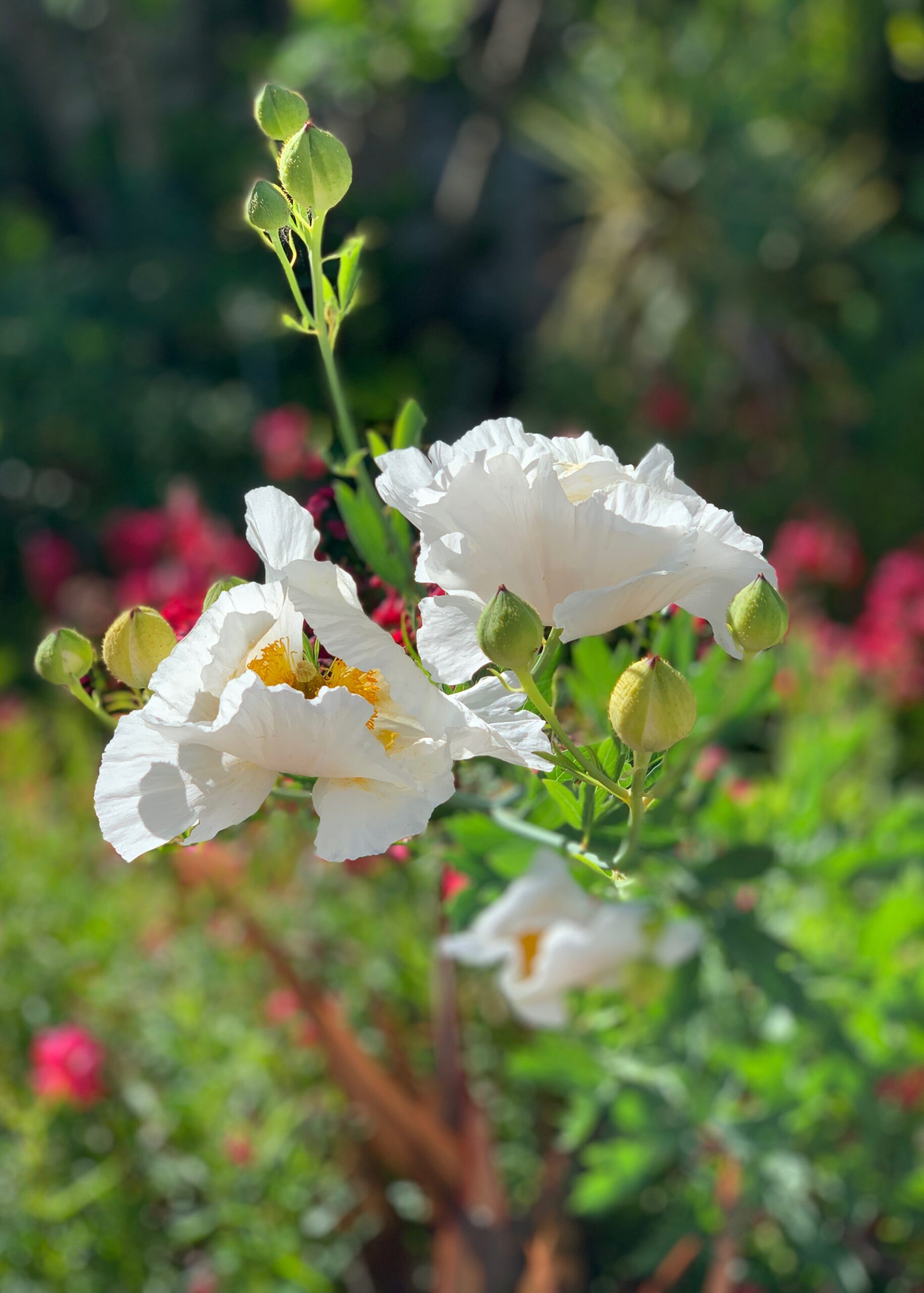 We have recently reintroduced the California tree poppy near the Cottage.

Next is one of Joyce Robinson’s favourites, which is the Californian tree poppy (Romneya coulteri). This plant was all but lost to the garden and we have successfully re-introduced some plants to the west of the Cottage conservatory.
They have architectural, glaucous stems and leaves to about five feet and produce several huge white poppy-like flowers with yellow centres:  Very imposing and impressive! 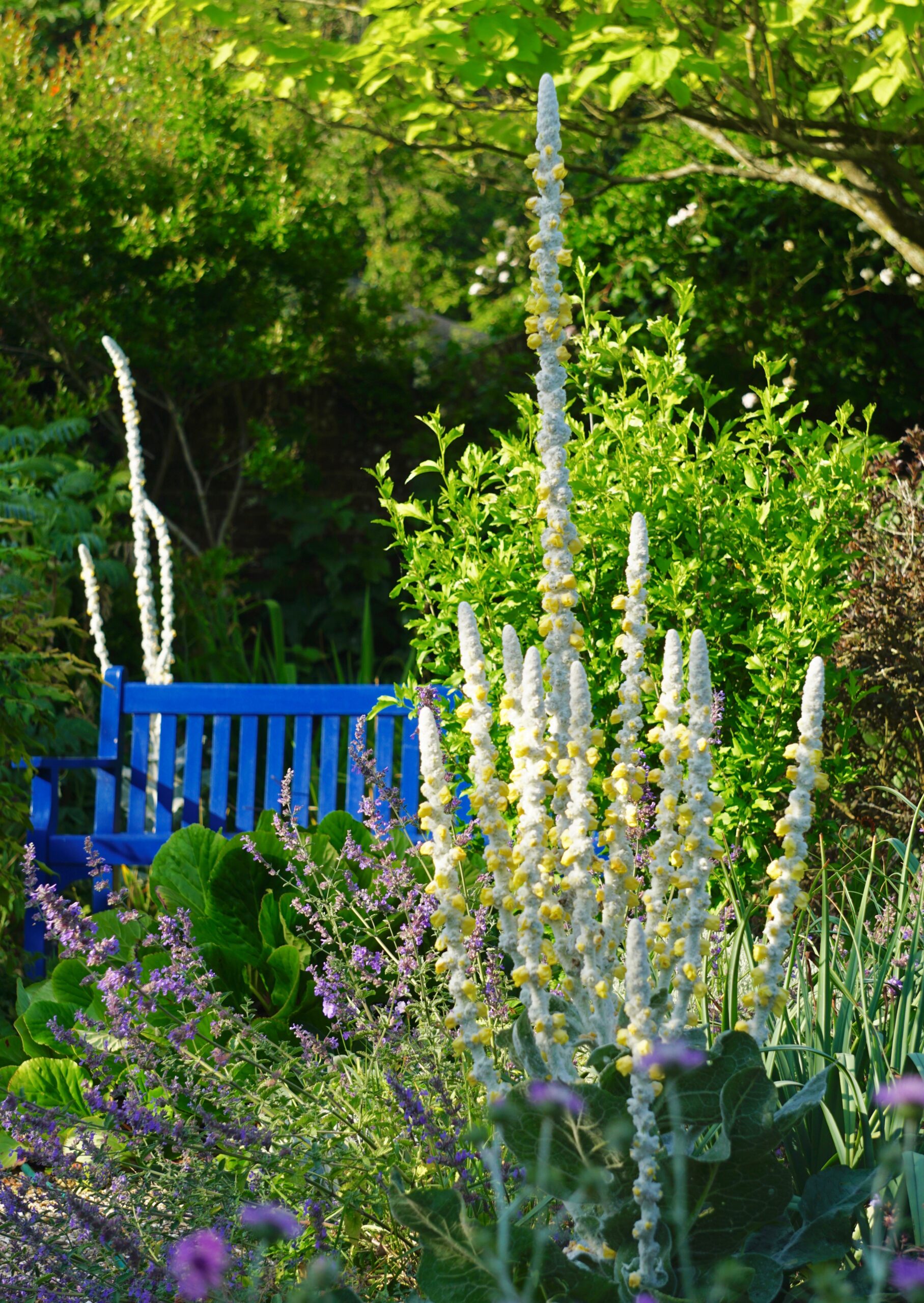 The architectural Verbascum bombyciferum self-sows spontaneously throughout the garden.

Dotted around the garden are several plants of mullein, Verbascum bombyciferum, (the largest species).  In its first-year mullein produces a rosette of large pointed silver leaves that are felted. In its second year it produces a four to five-foot woolly white stem from which lovely yellow flowers open around the stem, rather bizarrely in a random order, some from the top, middle and bottom of the stem. Another impressive architectural plant that both John and Joyce loved.  She called them “her men from outer space”. 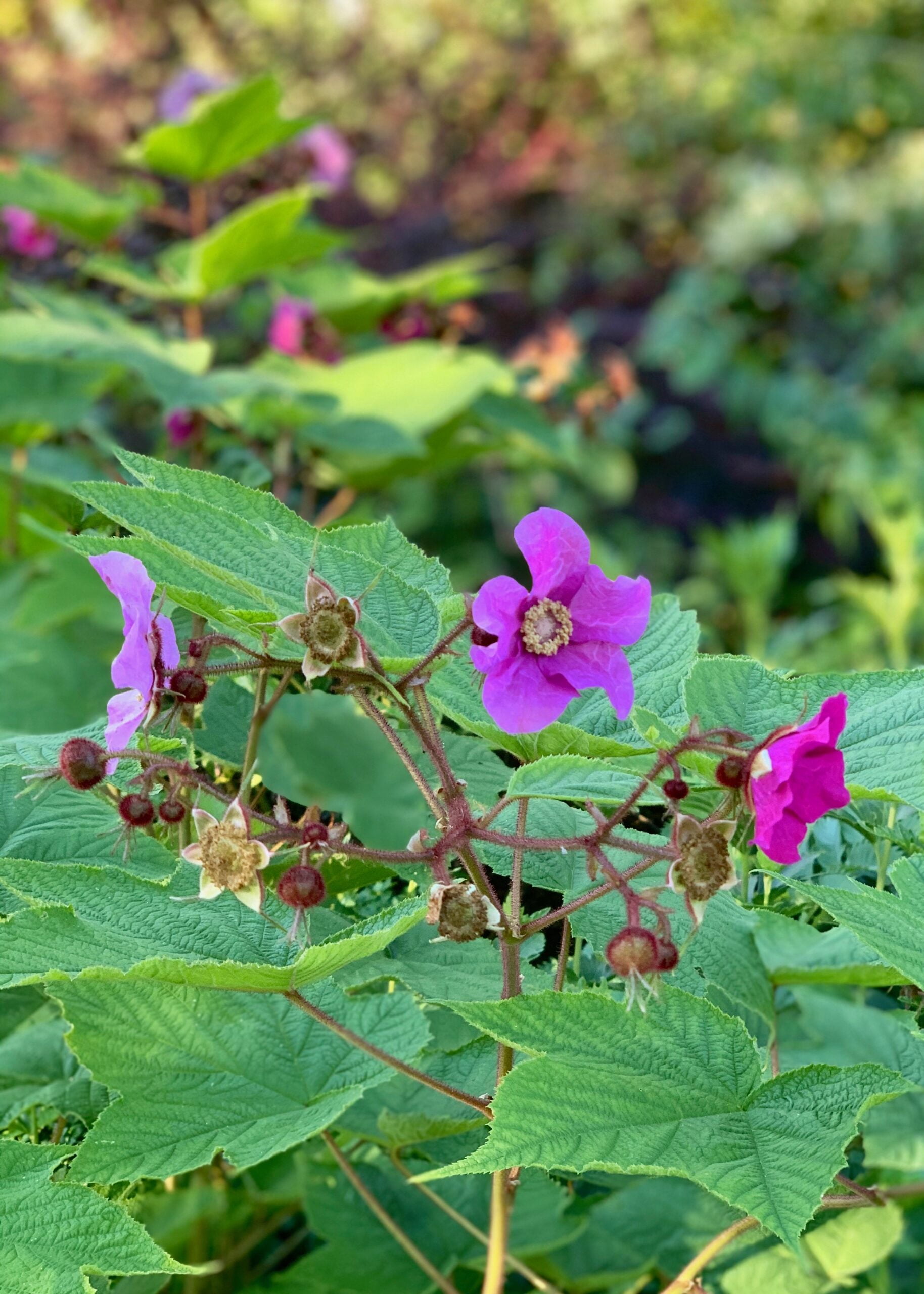 The Japanese Wood Poppy, Glaucidum palmatum, resembles a shrub in summer but dies back to the ground in winter.

We have two main clumps and other small plantings of a lovely and unusual woody shrub called Glaucidium palmatum. This has Acer-like foliage and at this time of year is producing several single cerise flowers (geranium like but bigger), from furry green buds.

It’s a woodland shrub, but we have it in two separate areas, with one getting the morning sun and the other the afternoon sun…. they are both equally very happy.  It’s hardly ever offered in nurseries, but we still have a few of our own propagated plants for sale if you are quick!

Another common but very much understated plant in bloom at the moment is Lady’s mantle (Alchemilla mollis).  Again, you will find it in various parts of the garden, but it is most impressive, in my opinion, where it is used to follow the dry gravel stream bed.

Lovely airy frothy yellow flowers sit atop attractive foliage that uniquely holds water droplets on the leaves after we have had rain!……. I might have to wait till September to see that !🌧 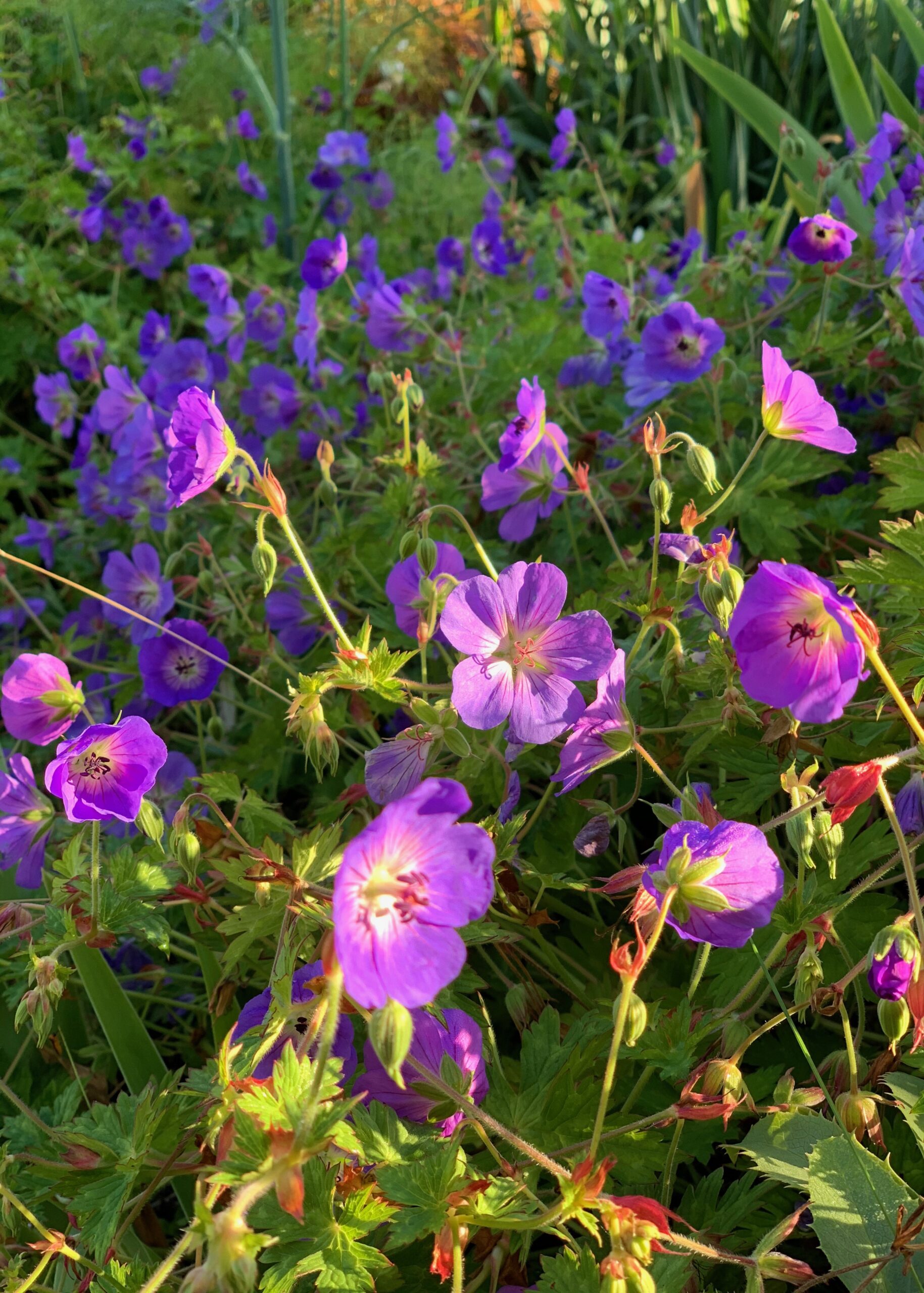 Geranium “Rozanne” grows freely throughout the garden but has a different affect depending on where it is located and the plants that it grow beside it.

Another fantastic plant is the award winning Geranium “Rozanne” which, from May until at least September, continuously produces azure blue flowers with central veining on top of big mats of palmate foliage.  We have some huge plantings that stand-out from distance and work perfectly with taller plantings around them.

All in all there is plenty to see and admire and listed below are several other plants in glorious bloom this month: 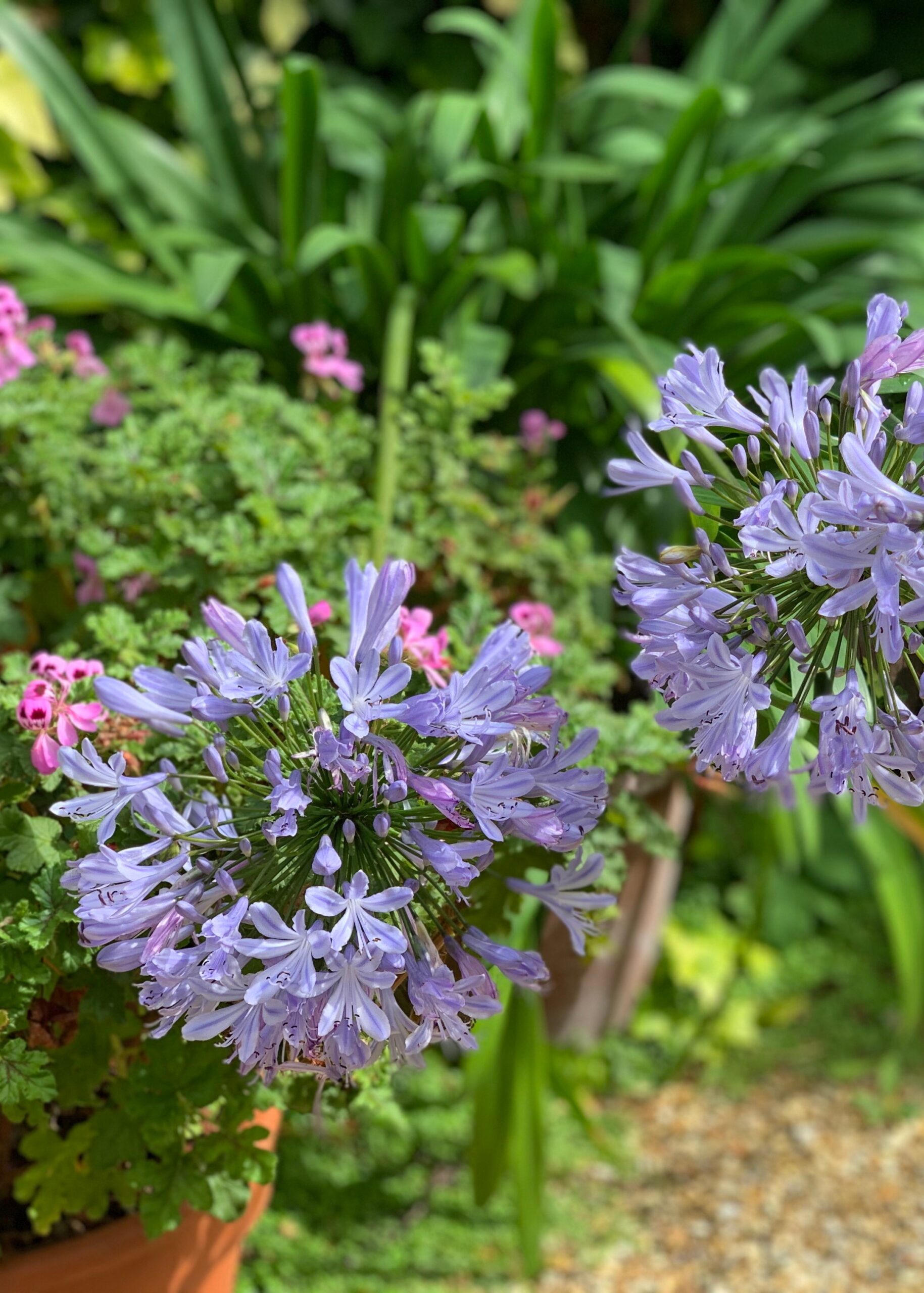 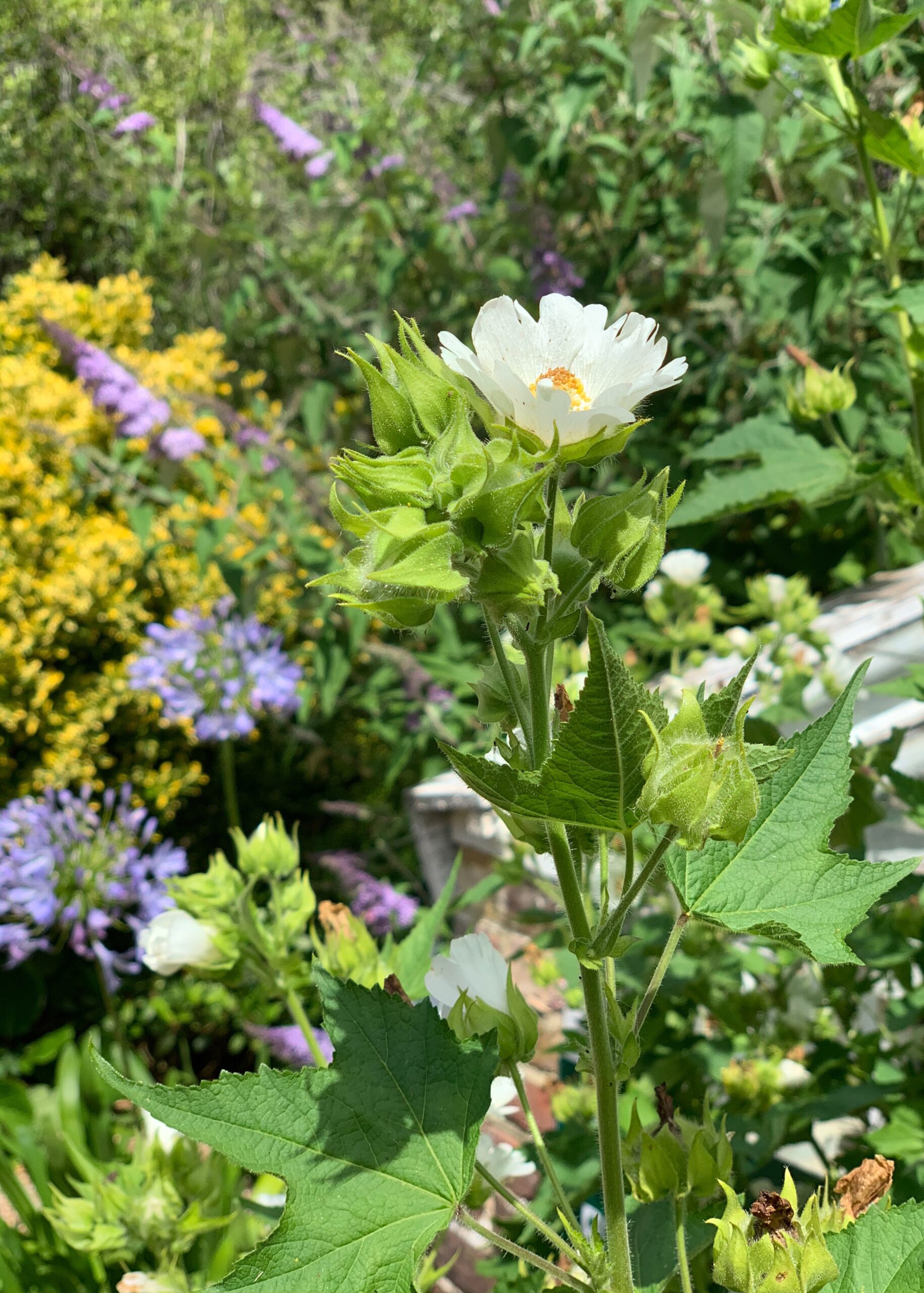 Chalice flower, Kitabelia vitifolia, resembles a hollyhock but is bushier in habit and is a perennial. 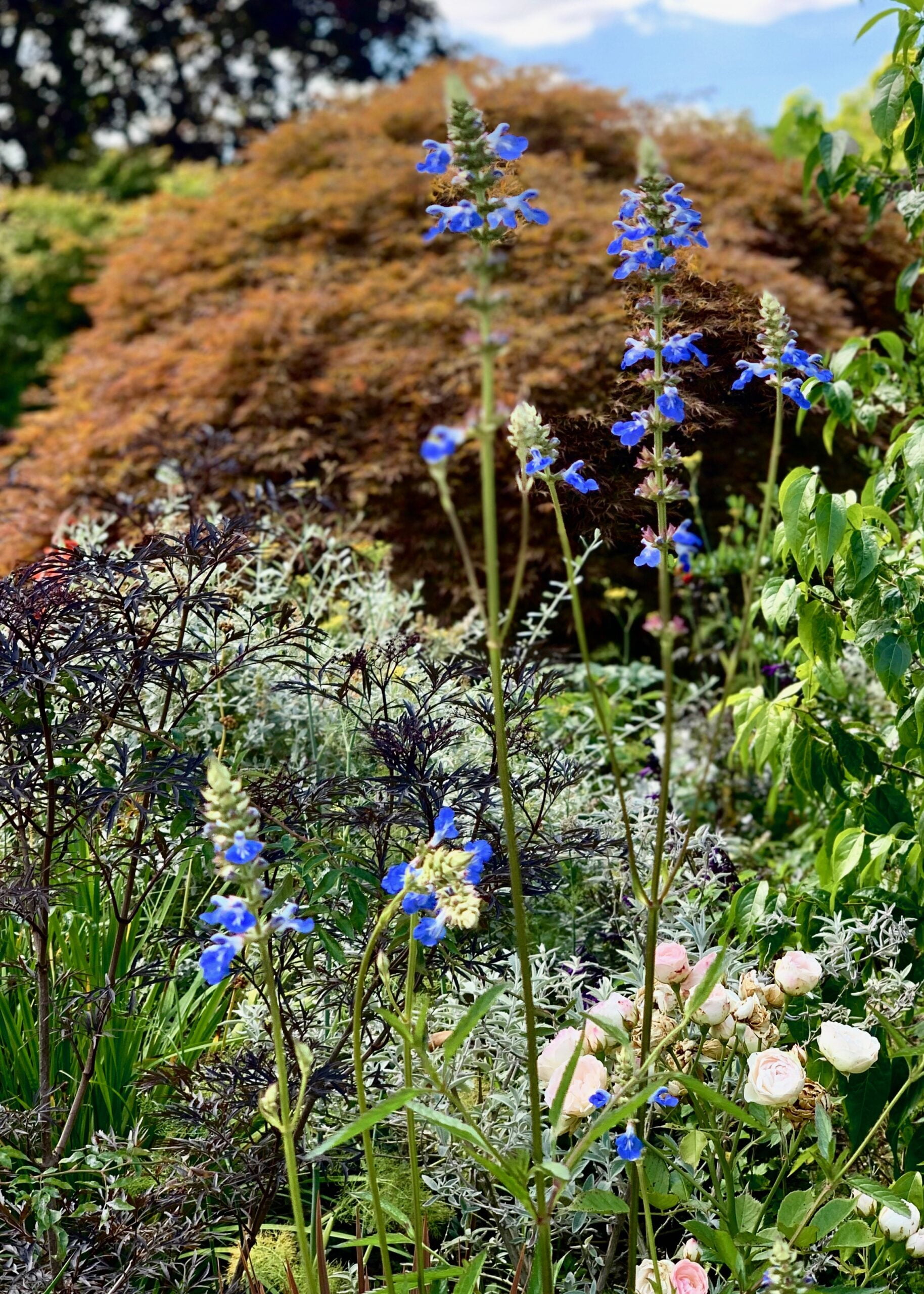 Salvia ulignosa grows in the Dutch light greenhouse at Denmans, but is a beautiful, elegant perennial that is hardy in the garden. 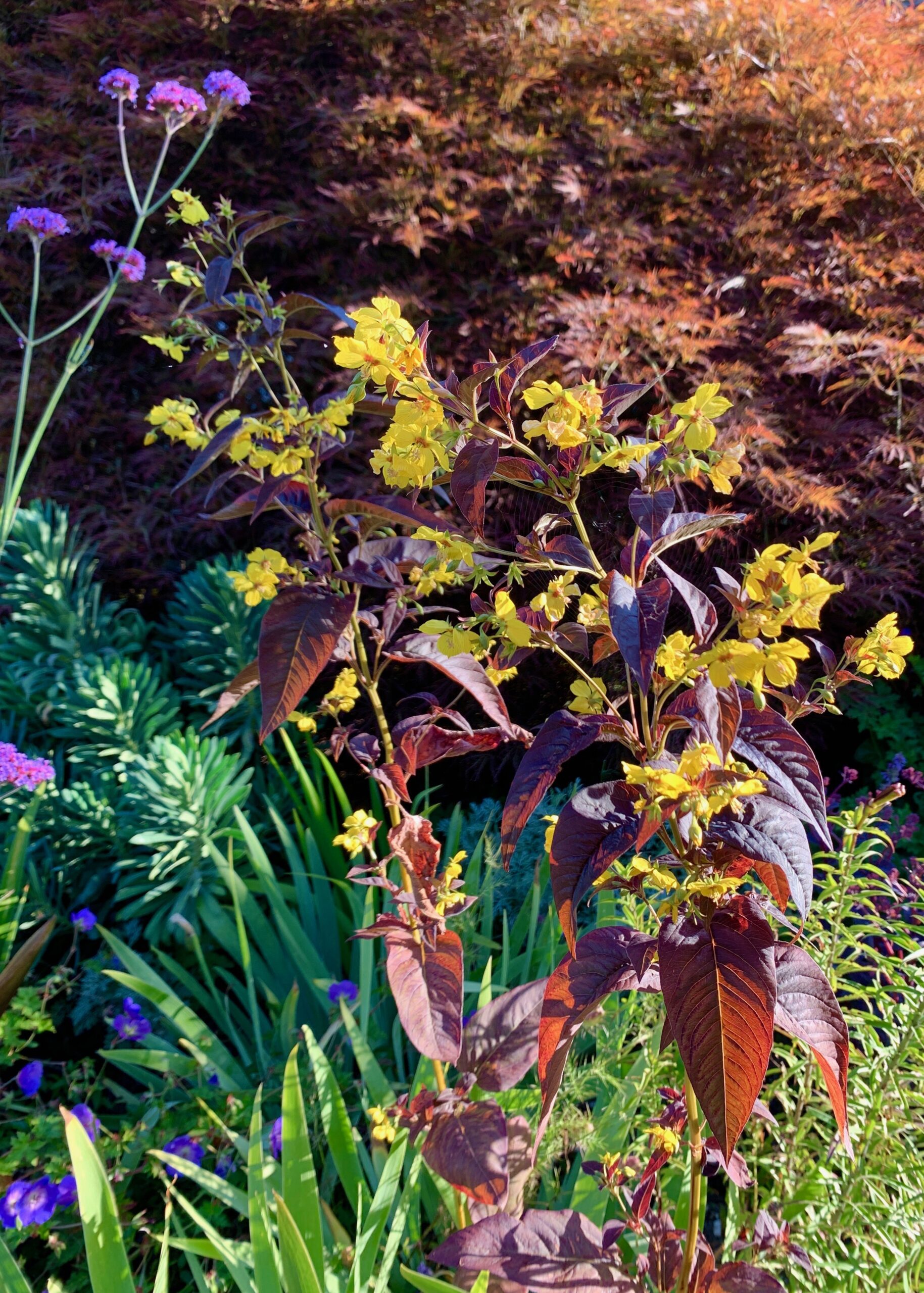 Lysimachia ciliata “Firecracker” is a good complement to other red-leafed plants in the garden. 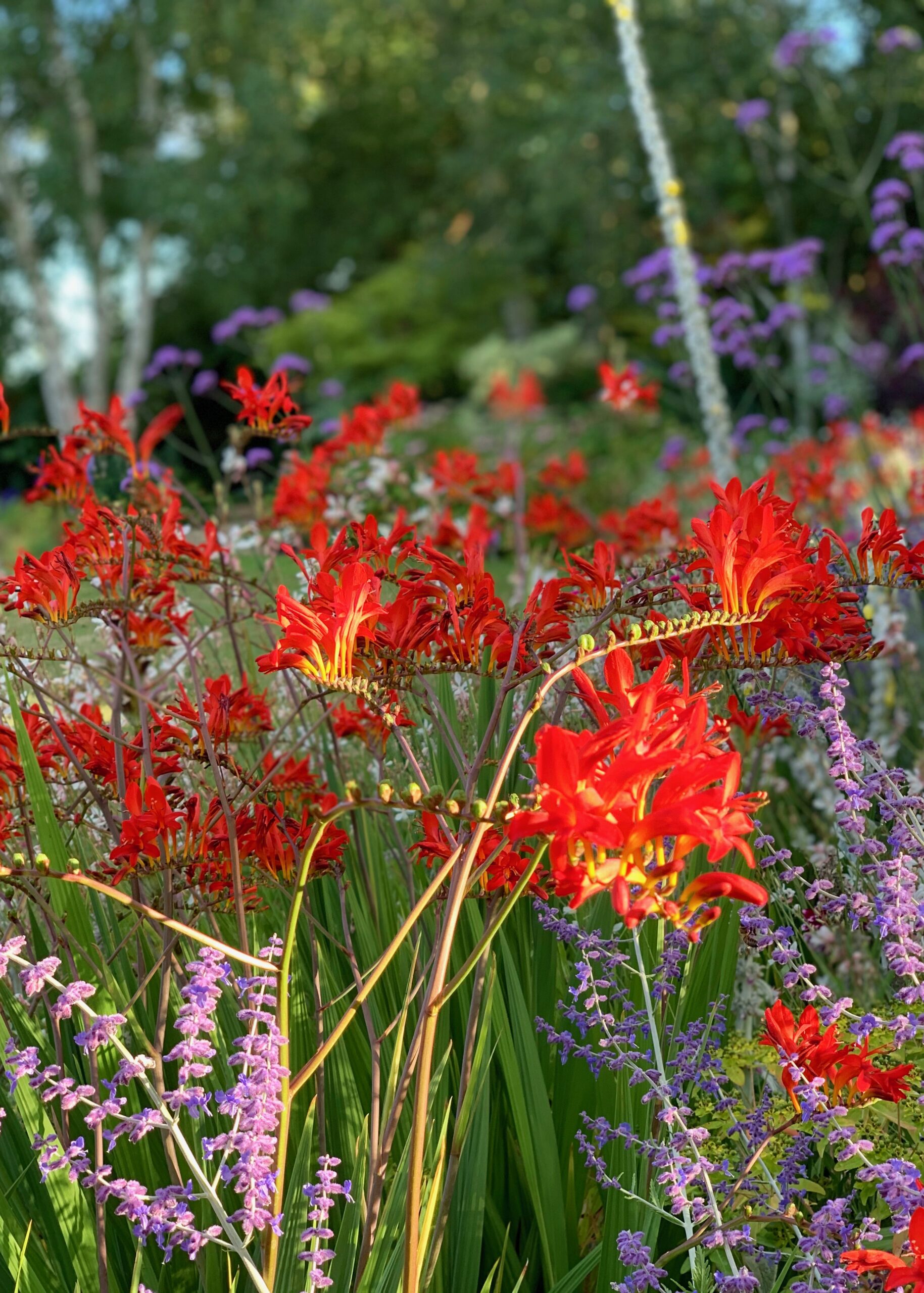 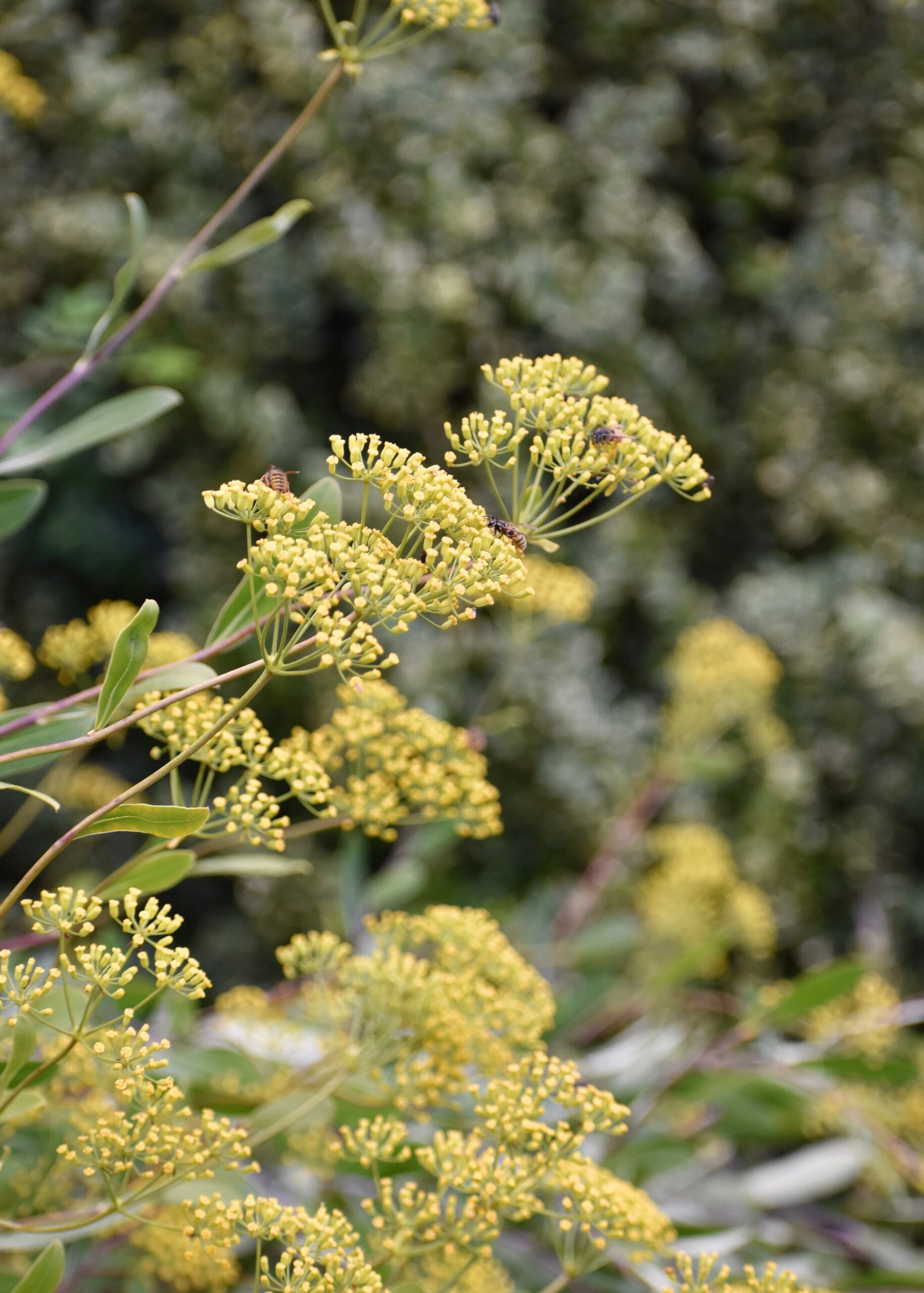 Shrubby hare’s-ear (Bupleurum fruticosum) has long, narrow blue-green leaves all year and its chartreuse flowers in July look like dill — a great colour that works with every other colour in the garden.

Bupleurum fruiticosum (very choice and available in our plant centre), 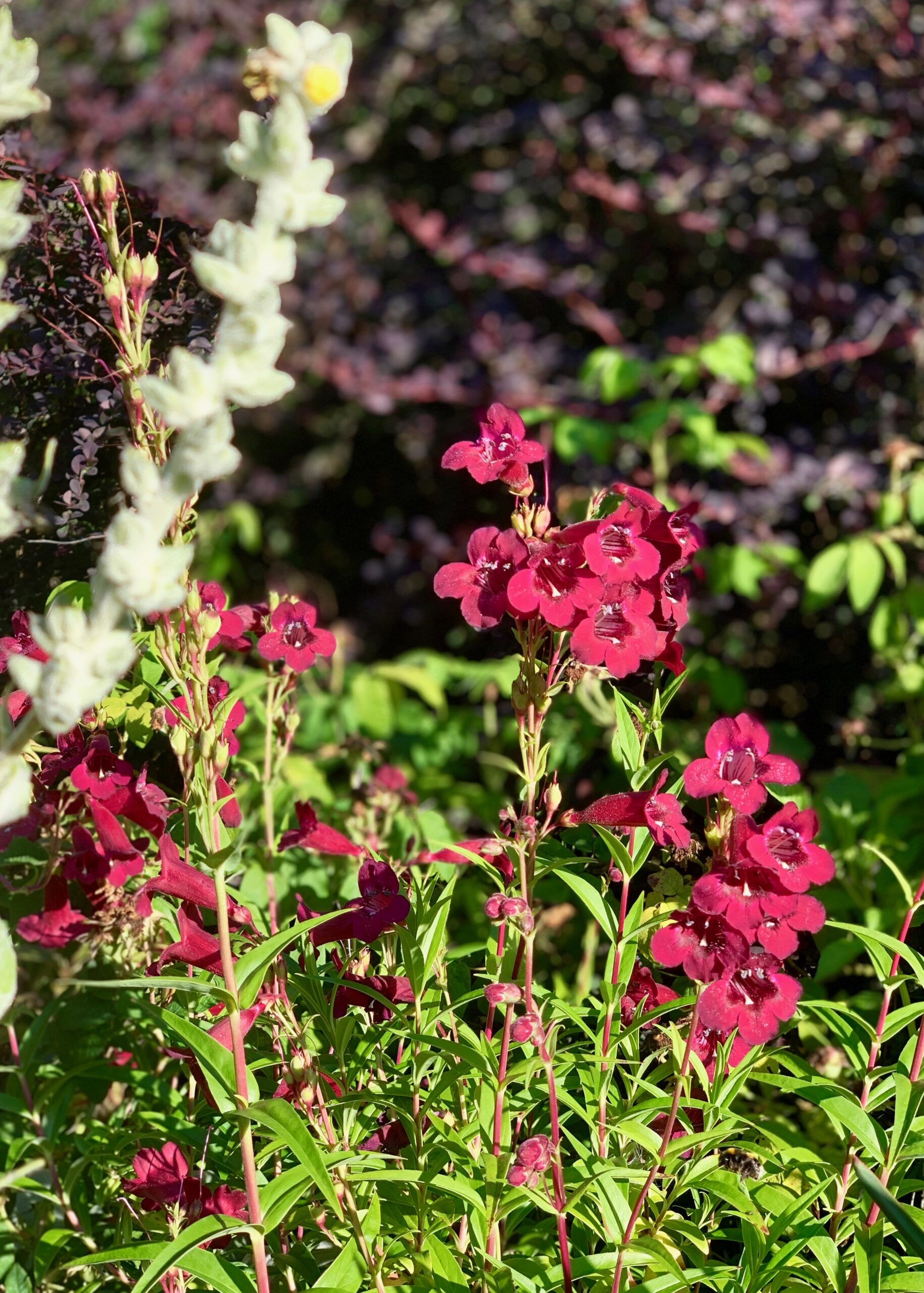 It’s impossible not to love the colour of the oddly named Penstemon “Plum Jerkum”. 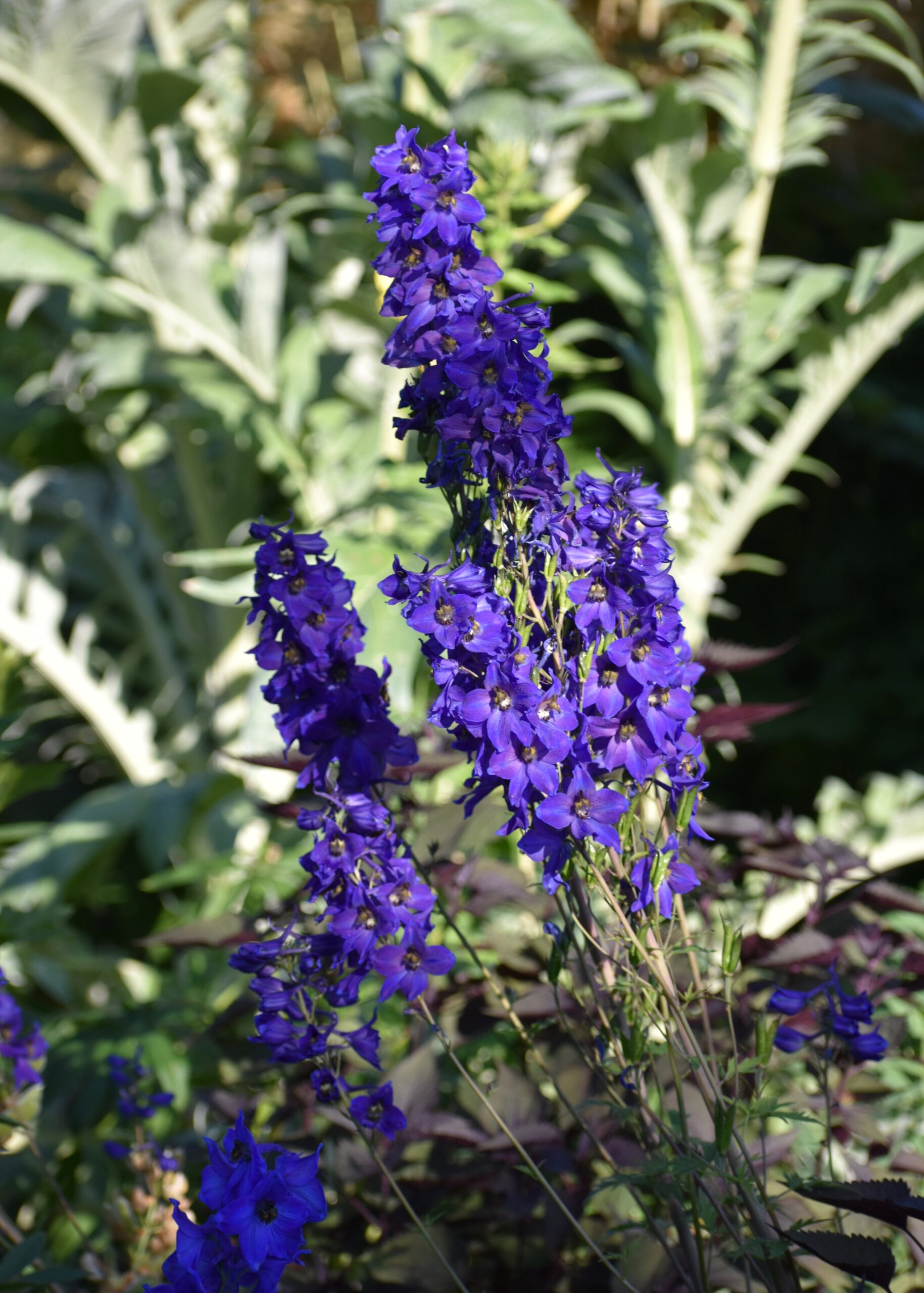 Delphiniums and cardoons make for an amazing combination. 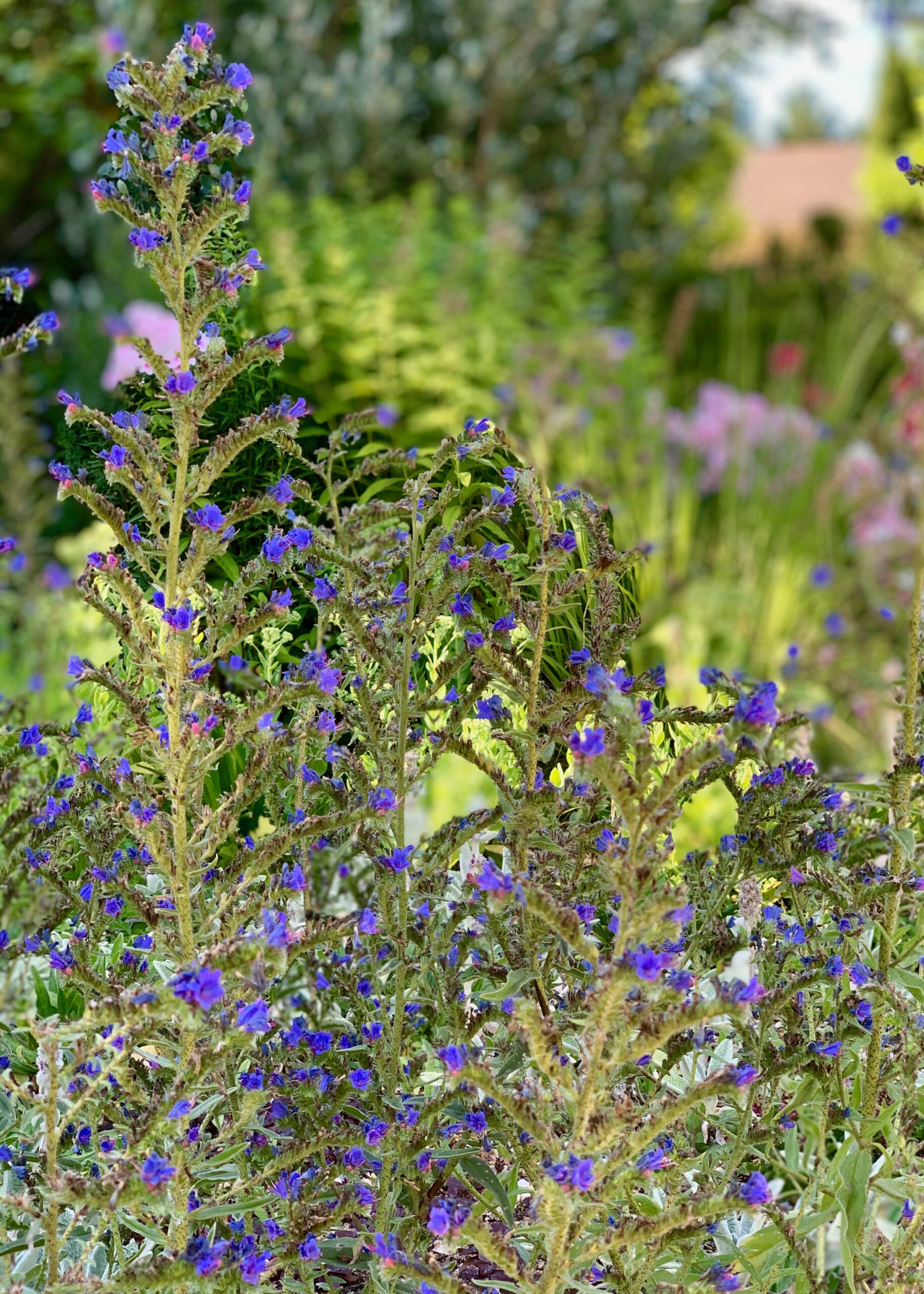 Viper’s bugloss, Echium vulgare, is a biennial that is attractive to pollinators, especially bees, and is the last species of Echium to bloom at Denmans. 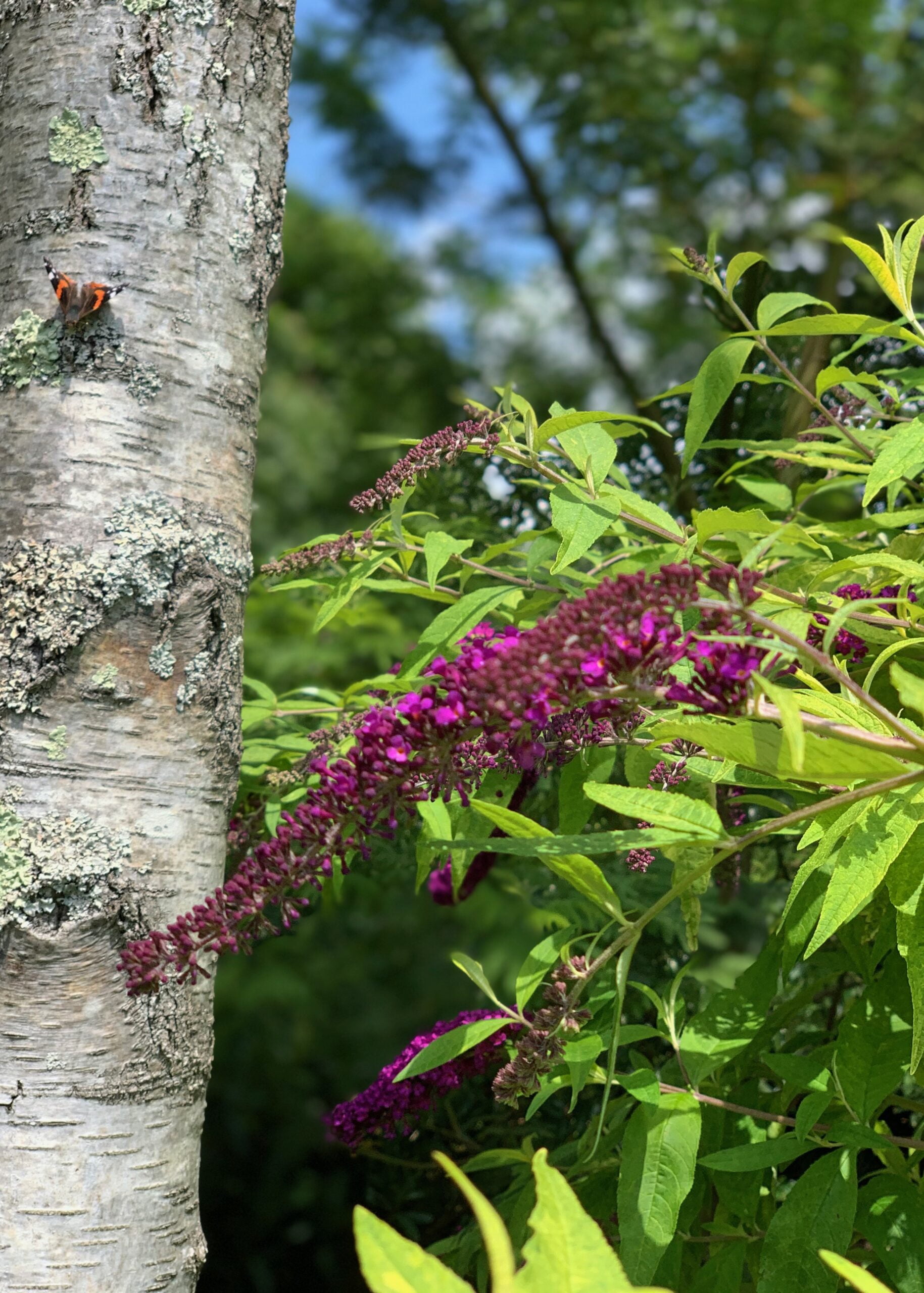 Buddlias in various colours, both flowers and leaves, grow throughout the garden, attracting loads of pollinators. 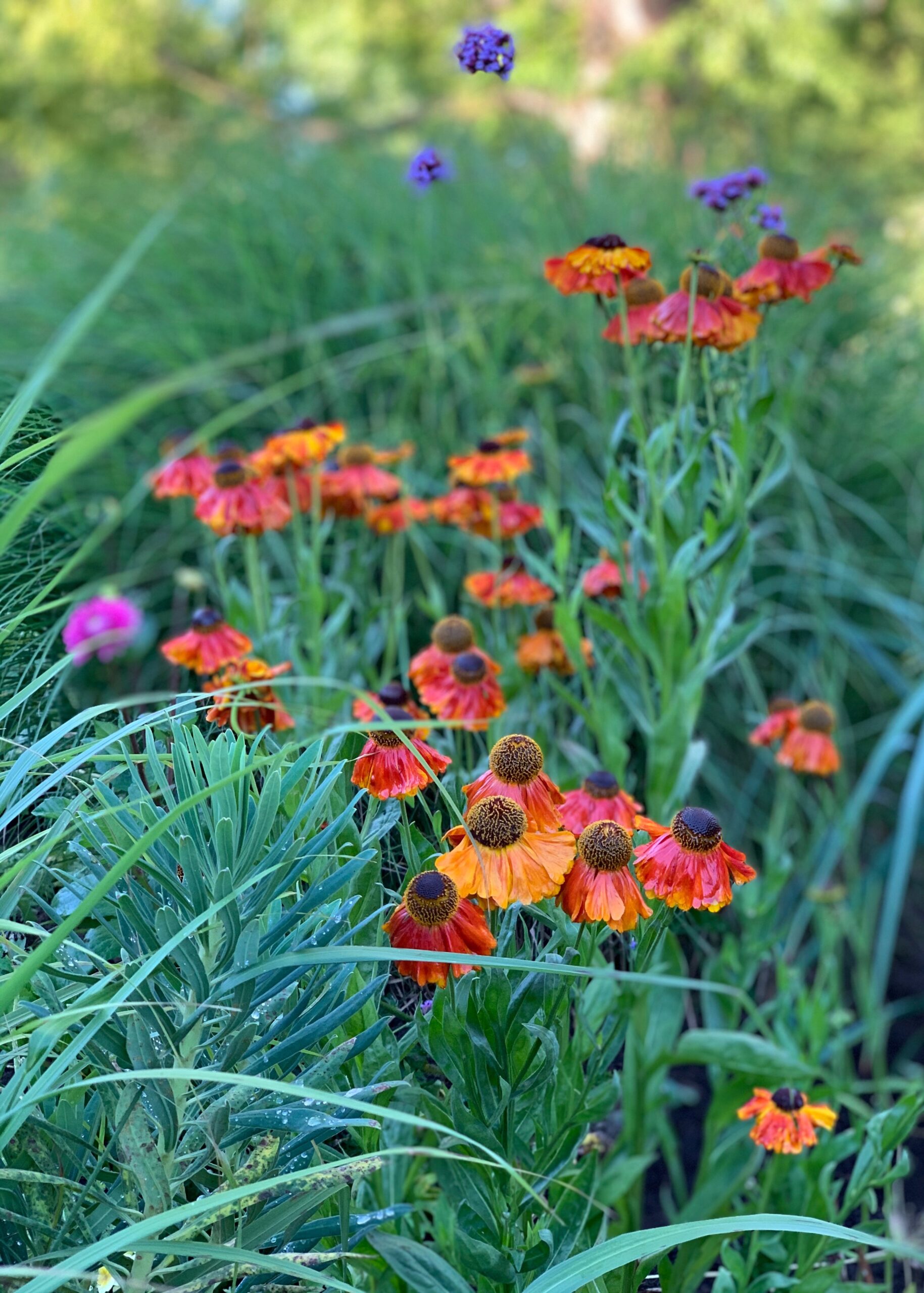 Heleniums look amazing with other textures and colours and also attract pollinators. 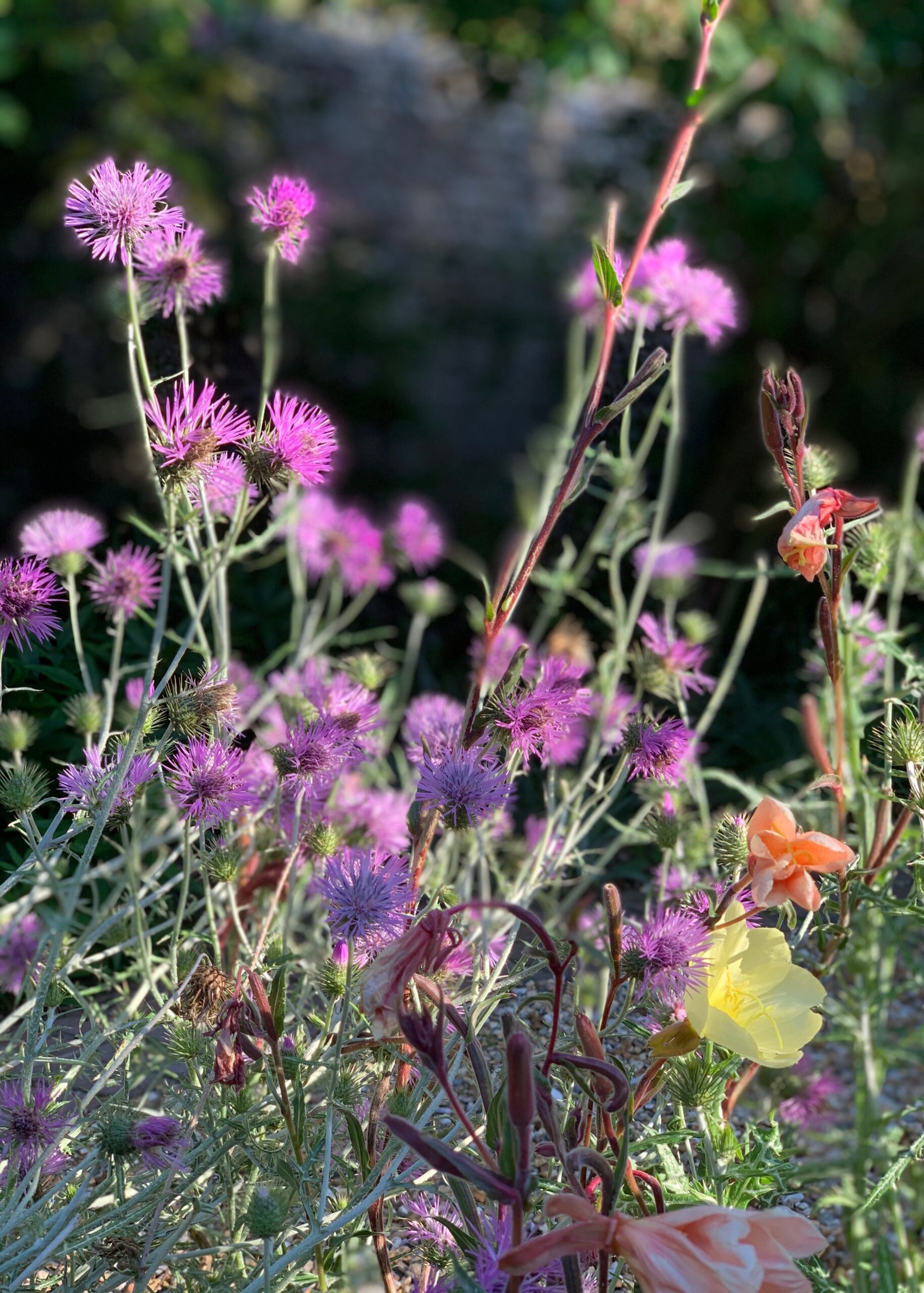 The freely self-sowing purple milk thistle, Galactites tomentosa, has delicate variegated leaves and stems that delight even when it is not in bloom.

Galactites tomentosa
(we will be propagating this as everyone wants it), 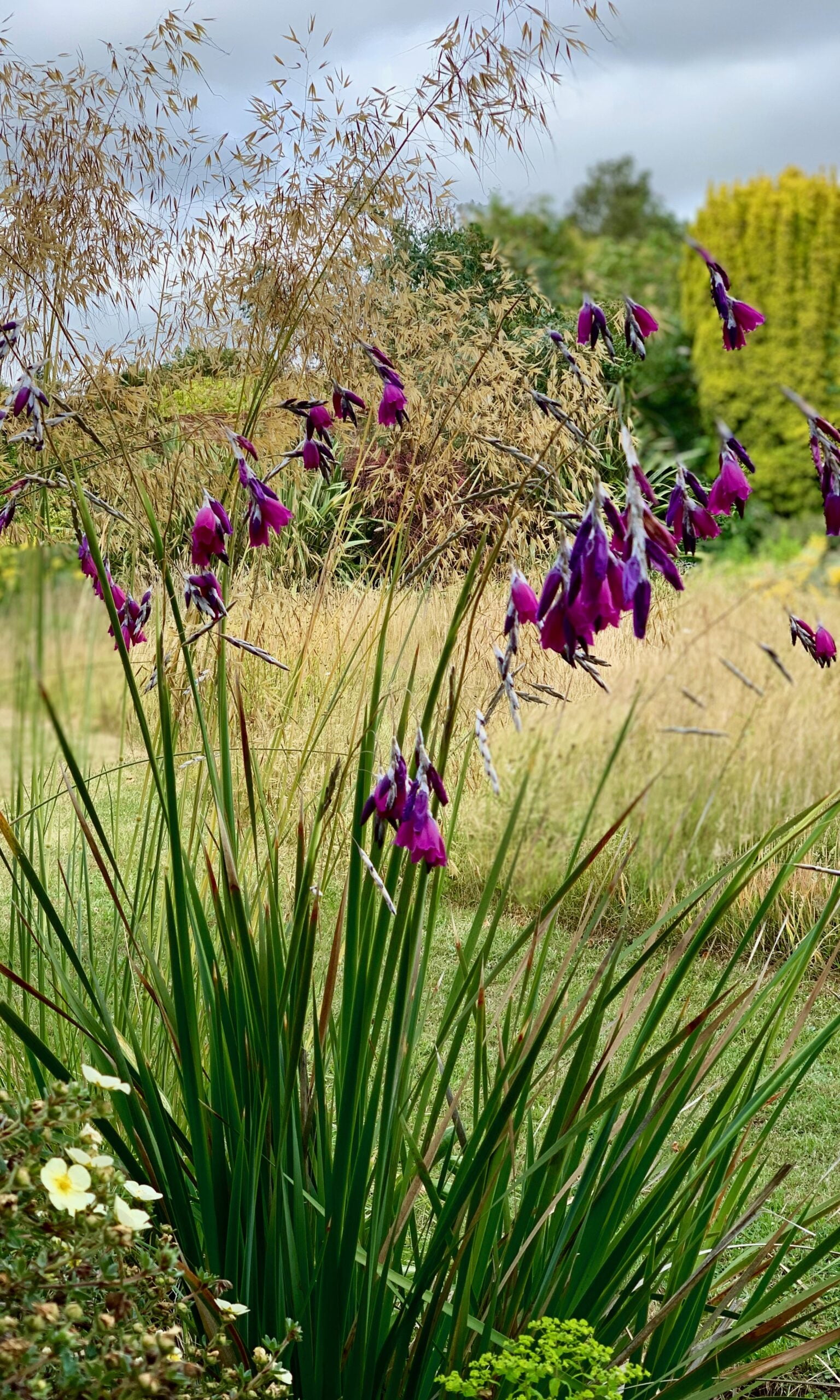 One of Joyce’s favourite perennials, Angels fishing rod (Dierama pulcherrimum), looks like a grass until it flowers.

and much, much more.

Come and see for yourself

Hope to see you in the garden soon. 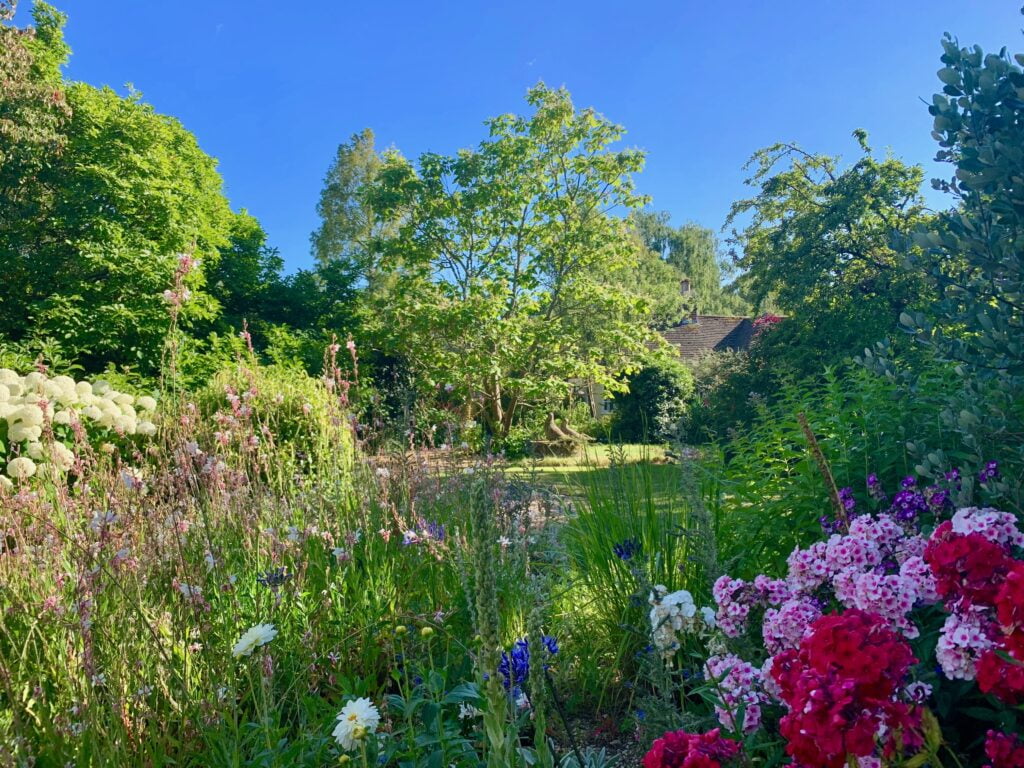 The garden is full of colour and suprises — come see for yourself!