Of Snow Drops and Other Things 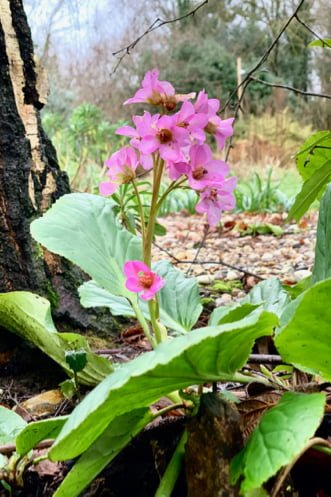 An early blooming pink bergenia in the dry river bed at Denmans.

It’s that moment in early spring when bulbs and perennials begin poking their heads through the cold soil, reaching for the faint warmth of fragile winter sunlight, that sustains gardeners and non-gardeners alike through the last dreary weeks of winter.

To gardeners, it is as though old friends are returning from a necessary absence; daffs there, pink bergenias here, and crocus around the corner.  Here at Denmans Gardens, the bluebells are already showing their leaves, forget-me-nots are rampant, and the odd (very odd!) perennial is already blooming – a light coral watsonia near the Conservatory, a too-early blue Anemone de Caen at the base of a birch tree. 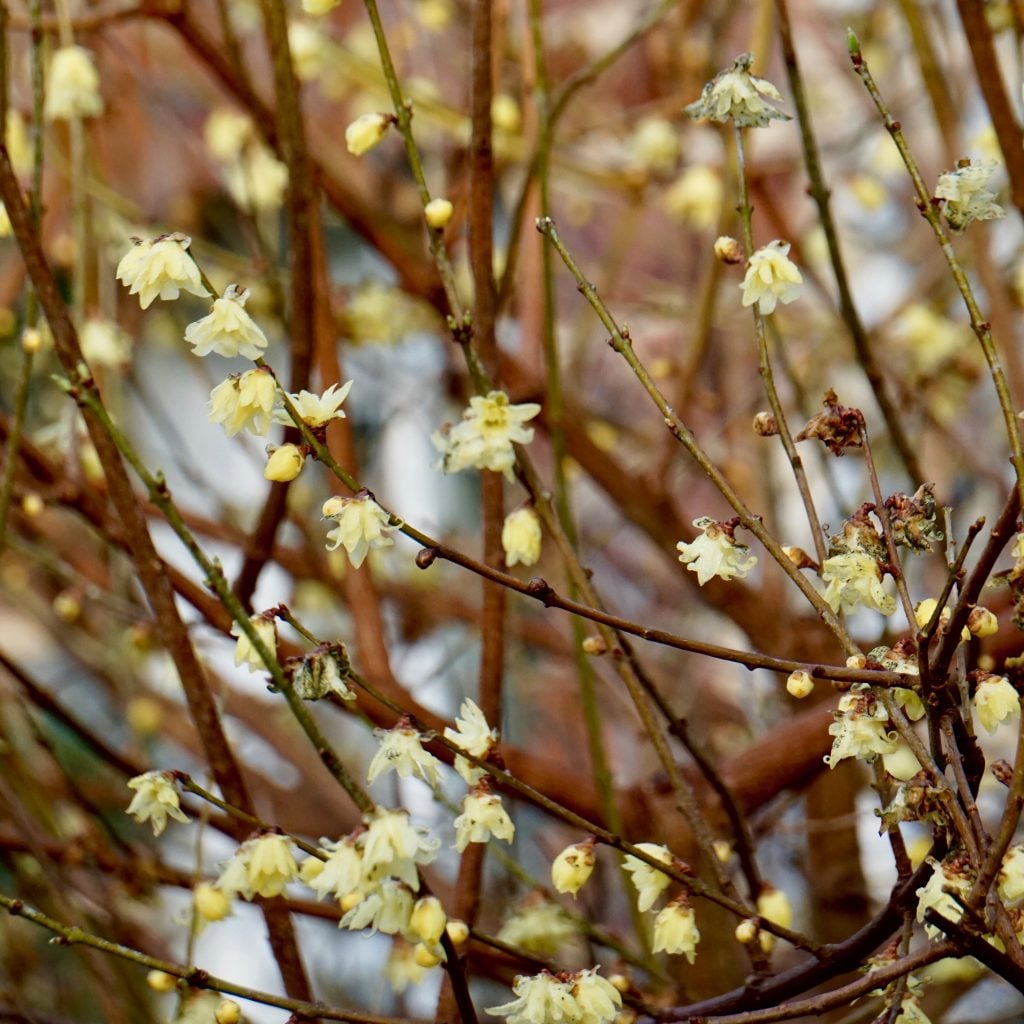 Winter shrubs are blooming everywhere and the fragrance of the sarcacocca and daphnes is literally breath-taking. The early camellias, chaenomeles, and Winter Sweet (Chimonanthus praecox), to name a few, are in full swing.  The garden, gently blooming, is enchanting despite the gray, drizzly skies.

This year we’ve also had the extraordinary pleasure of discovering a host of bulbs that are coming up in places we didn’t plant them and where we have never seen them before.  It’s like magic. 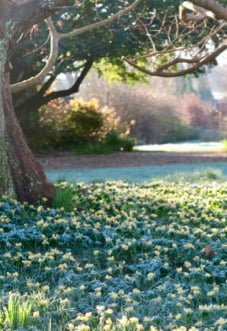 It’s not really magic.  The bulbs, predominantly snowdrops (Galanthus), have been here for years – decades, really.  We deduce this because John Brookes MBE, the great British landscape designer whose home Denmans was for nearly 40 years, didn’t like snowdrops and wouldn’t plant them.  He complained with a faux-shiver that they looked too cold and stark-white in the barren winter landscape.  He preferred the cheery brightness of lemony winter aconites (Eranthis hymealis) and early narcissus instead.  Consequently, in the past two weeks Denmans has been liberated from the dullness of January’s damp gloom by his beloved sunny yellow drifts of aconites that have burst into bloom.  They are rampant.  The daffodils are also just starting and the crocus are definitely out.

But back to the snowdrops.

John’s predecessor and the woman who started the garden and lived here for 50 years was Joyce Robinson (1903-1994).  A brilliant self-taught horticulturist, she loved snowdrops.  Indeed, the love for snowdrops seems to be part of the British DNA:  The nation of gardeners is also a nation of “galanthophiles”, John’s shivers notwithstanding. 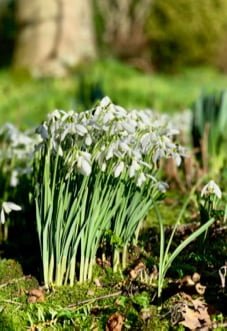 The snowdrops blooming at Denmans now were planted decades ago by Joyce Robinson.

We know Joyce planted snowdrops because she’s writes about them in her book about Denmans, Glorious Disarray (1990).  Ever pre-occupied by the beauty of a winter garden, she nevertheless cautions her readers not to get carried away by planting too many bulbs, making the garden “look rather too busy.  But let there be golden daffodils to welcome you at Eastertide and snowdrops by the seat under the fig tree’’.

As we have been restoring the garden for the past couple of years, systematically cutting back long-overgrown shrubs and clearing endless colonies of weeds, these intrepid little white flowers have begun to poke up in places she planted them and where they have naturalized.  Despite being buried beneath fallen leaves and hidden by ground elder and the shadow of overgrown trees and bushes, they have amazingly endured.

We joyfully discovered a drift of snowdrops last year by the pond and and another small group near Clock House.  This year their straight green leaves and white, bell-shaped flowers are appearing in tentative drifts near the Cottage and the Nut Walk, nestled artistically among beautiful pink and white hellebores and cyclamen.  There are even a few among the aconites.  We take enormous pleasure from each clump we discover and greedily search for others, amazed that they have survived decades of neglect.

And so, despite the endless rain and mist and drizzle of the past few months here in Sussex, allegedly the sunniest part of England, spring has arrived at Denmans.  We are blissfully welcoming our old friends back as gardeners do and jubilantly revelling in those we are seeing for the first time.  It really is magic.