A small garden designed by John Brookes for clients with a busy lifestyle and little time for gardening.

It is very odd that many homes which are really beautifully designed internally come to a grinding halt at the window. Yet interior design – the arrangement of furniture within a room and of pictures on a wall, the selection of colour and texture of fabric with fabric – is very similar to putting all the elements of a garden together. One is thinking first of function and practicality (for which limited time for maintenance is part), then scale and styling, all conditioned by economics, to create a particular mood. It is just that mood which you seek to create outside.

John Brookes
‘How to Design a Garden’
https://www.denmans.org/the-book/

One of John’s many great gifts was his ability to reconcile beauty in his designs with the mundane practicalities imposed by the site he was working on.  One of the keys to doing so, as he often advised, was to start with a list of desires followed by understanding and measuring the site.  Starting with the premise that the garden should be an extension of the indoors (a revolutionary concept in Britain in the early 1960s) he likened the process to interior design.

The rest of the quote from this article which he wrote for the Sunday Express in 1987, continues his thinking about the parallels between interior and garden design:

Think about what you want from your garden before you start building it and reassess regularly to make sure it is what you want and suits your lifestyle and pocketbook.

What goes wrong is that so many think first of often totally unsuitable plants, and then hope to arrange everything around them. It’s like designing a room around a lampshade, which can be done of course, but it’s a ‘putting the cart before the horse’ sort of method.

So, start off by listing what it is that you want outside, long before thinking plants – some hard surface, perhaps, to stand the pram on; a terrace on which to have a drink in summer; some water. And admit to yourself if you have not the time, or even the inclination, to garden. 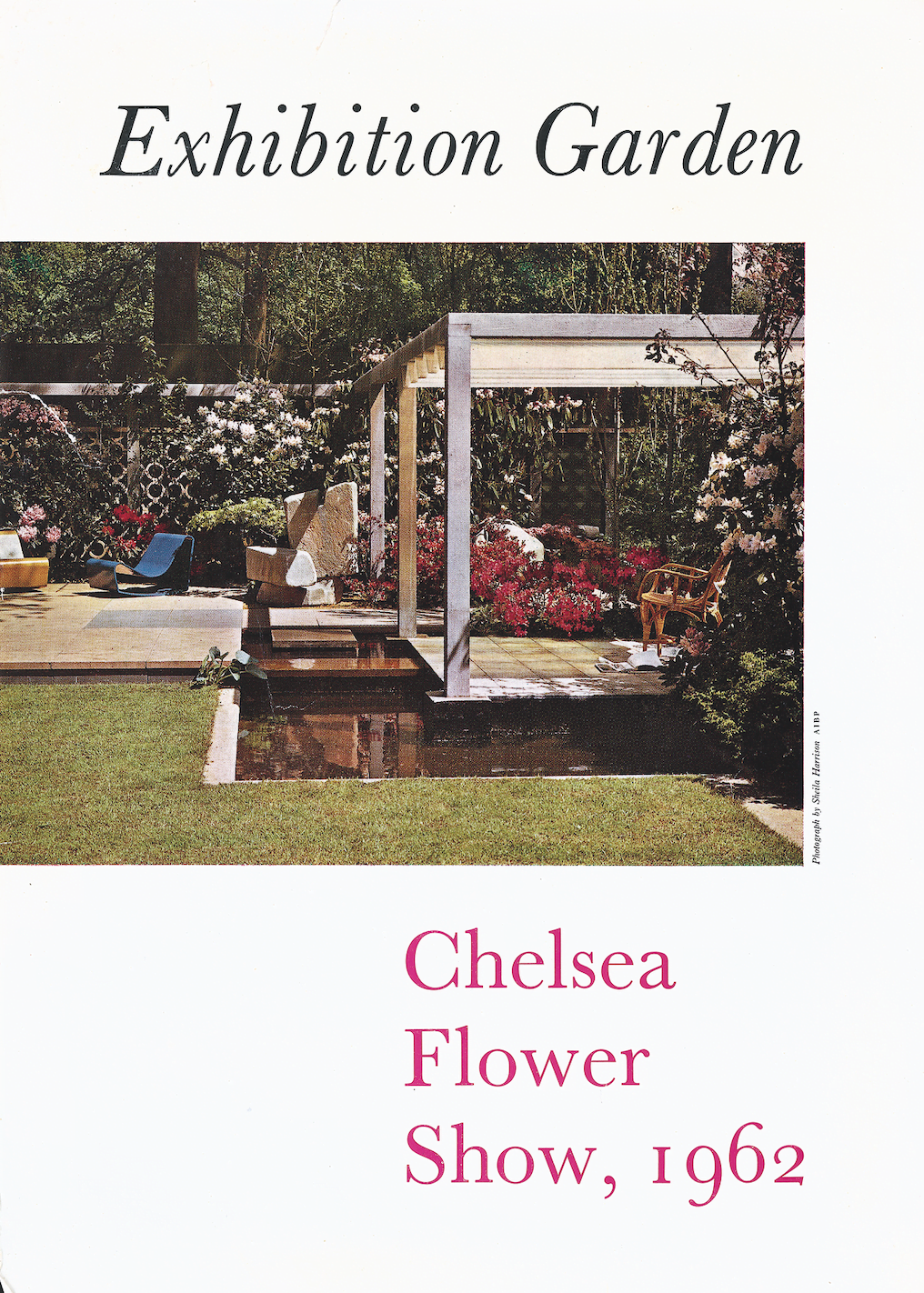 John Brookes’ 1962 Chelsea Exhibition garden was the first to depict a designed garden rather than a showcase for plants. It was his first public ‘Room Outside’.

John first publicly presented the notion that the garden should be treated as an extension of a home’s living space, a concept he learned from his mentors like Brenda Colvin and Dame Sylvia Crowe, at the Chelsea Flower Show in 1962.  At the time, he was the first independent designer to create a Chelsea exhibition garden.  As he put it in his memoir, A Landscape Legacy, (Pimpernel Press, 2018) “It was remarkable because it was the first garden at Chelsea that was about design rather about merely showcasing plants. It was also the first exhibit in the history of the Chelsea Flower Show to be presented under the designer’s name rather than that of a nursery firm, as designers generally worked for nurseries at that tim

John’s Chelsea Garden depicted a garden associated with an imaginary townhouse that was meant to be a manageable – and stylish —  extension of its living space and was complete with sculpture, water, a pergola, a seating area, and even an incinerator. (He used to chuckle when he recalled that the chairs were made of asbestos).  The space was low-maintenance, comfortable, functional and, above all, stylish and beautiful.  Instead of starting with ‘totally unsuitable plants’ and designing around them, the plants took the role of providing structure and presumably, as it was a town garden, privacy.

Keeping John’s words in mind, then, as this is the end of summer and we are being inundated with bulb catalogues, lists of seeds to plant, now, and other advice, it seems that this is a really good time to think about ‘what you want outside’, whether you are starting a new garden or have an established one.

The first question is whether your garden suits your needs, your lifestyle, and your wallet?  Or do you need to make adjustments to it — before doubling down and ordering tempting plants or new garden feature.

Design your garden so that the views from inside are beautiful and relate to the interior.

You should also give some thought to the views of your garden from inside.  That link between the interior and exterior of your home is a visual year-round connection – or should be.  Do you have something to look at in the dark days of winter?  A focal point, perhaps, or winter-blooming perennials or lovely coloured twigs?  There is nothing that cures the winter blues like watching early spring bulbs emerge, heralding the lengthening of days and warmer weather.

And ask yourself whether your garden wants simplifying or if you need to reduce its maintenance demands.  Are there bits of lawn that you can replace with gravel or groundcover to save you time mowing?  Or are there planted areas that require too much clipping or weeding and could be replaced with simpler, more relaxed plantings?

Stepping back to look at the big picture, and then taking steps or planning adjustments now will help you to enjoy your garden all the more next summer – and may even save you time and money.  It’s a good time of year to work on that balance between the practicalities of your site and ‘to create the particular mood’ that pleases you.  Get started.