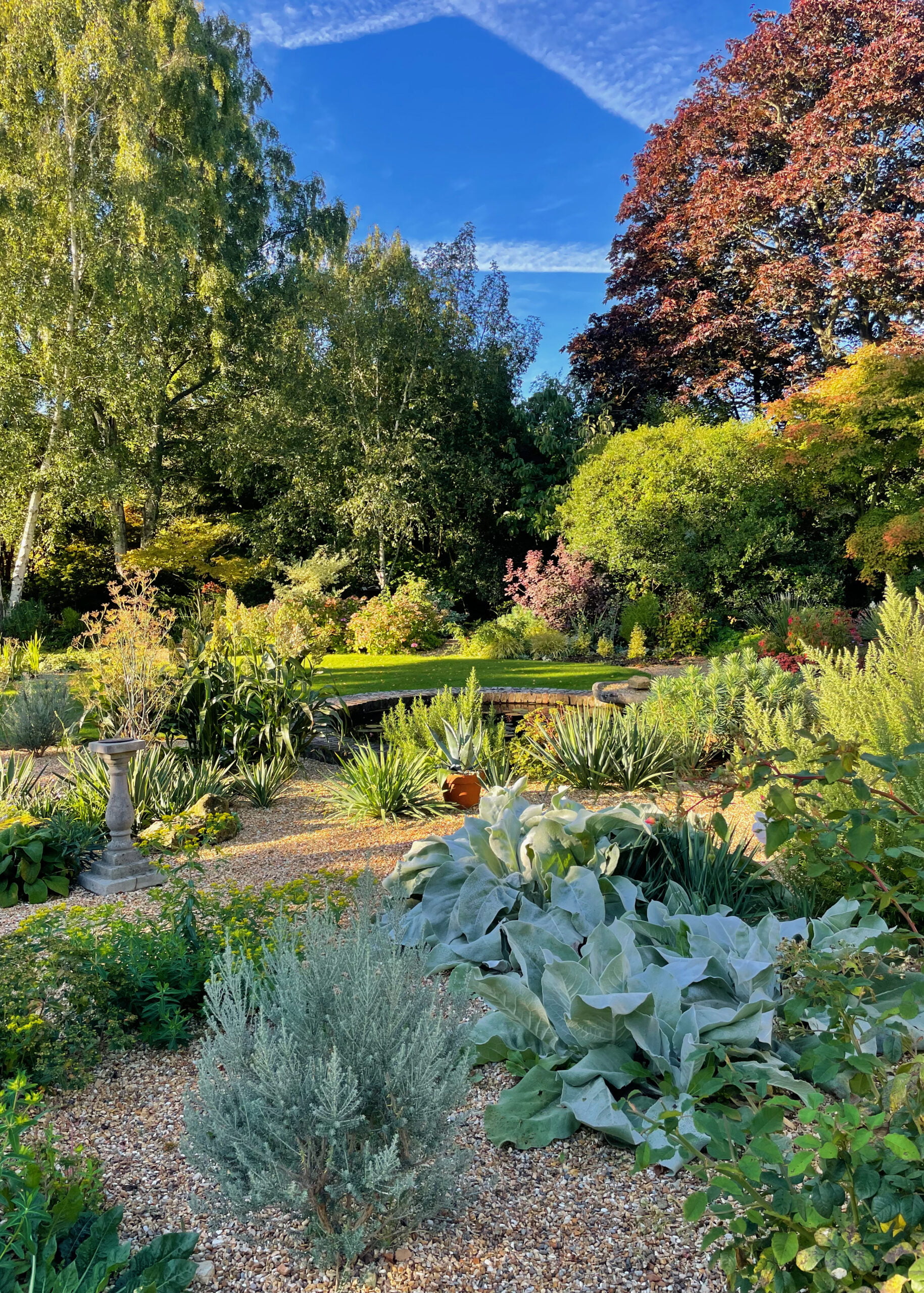 The Cottage Gravel Garden at Denmans.

Above:  Sue’s easel and paints amidst the vibrant yellows and soft pinks of spring.

Denmans is a tranquil garden in which structure, shape, and form rein in and exhibit a plethora of horticultural richness.  Simple curves and three-dimensional geometry are fused with texture, colour, motion, fragrance, and detail presenting visitors with the challenge of looking closely and standing back; turning around and looking forward; turning left or turning right; standing (or sitting still) and moving forward; examining individual plants and seeing the composition of which they are part.  There is no set route and glimpses of views beyond beckon as do the path ahead, and indeed, behind. 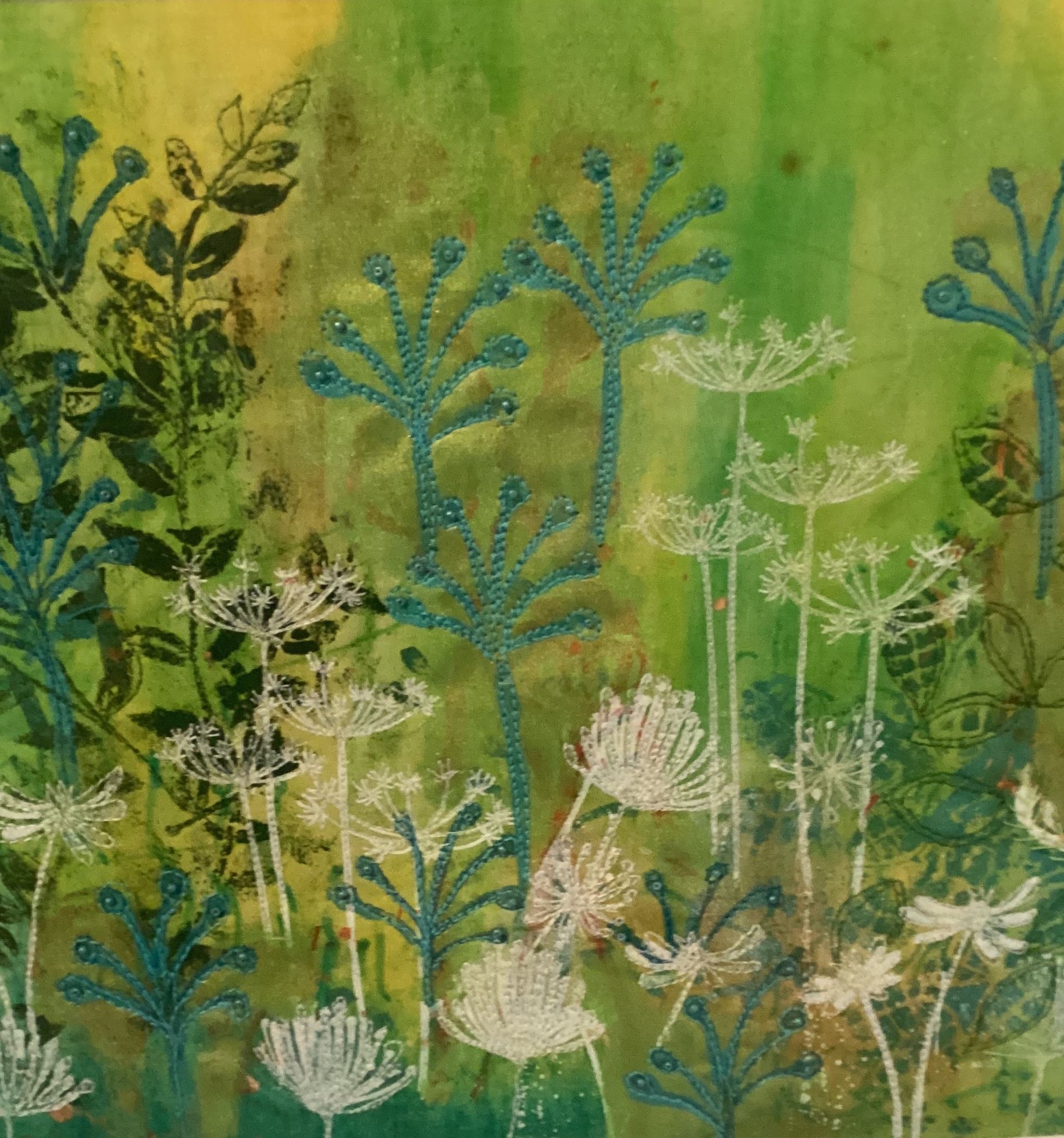 Our own experience of the Garden can be enriched by the perceptions and observations of others.   It is especially fascinating to see it through the eyes of artists.  Through the eyes of photographers, painters, weavers, and stitchers the Garden’s iconic features and colours though familiar, are different to how we see them, leading us to see things that perhaps we haven’t seen or noticed before.  Captured in still images, we can examine them, walk away, and return to them for another view.

When Sue England agreed to be Denmans first artist-in-residence in August of 2021, she embarked on a voyage of discovery as a painter, to challenge herself as she had never done. 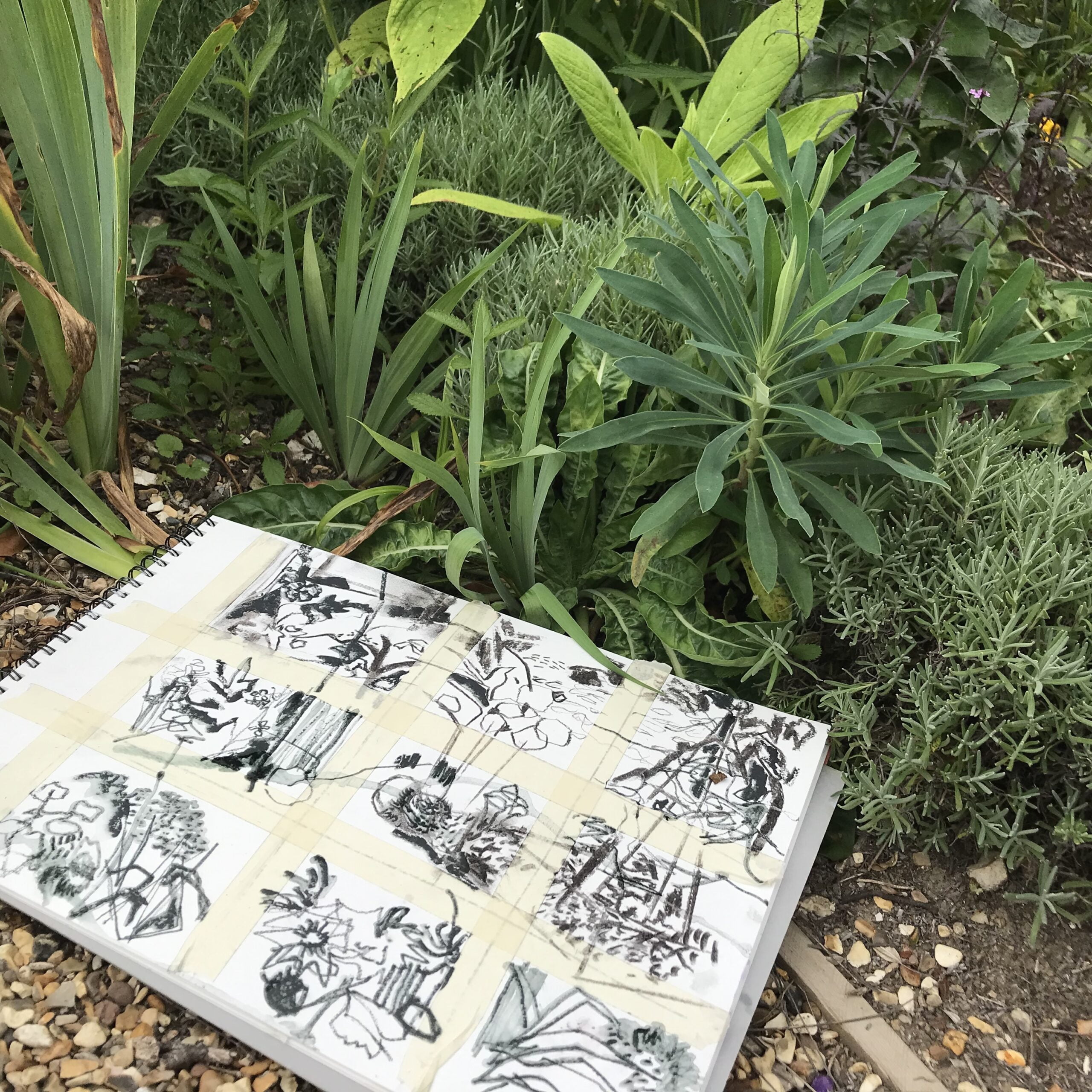 Her initial approach to the garden was like the approach John Brookes taught his budding design students:  Before venturing forth with canvas and painting kit, she spent time in the garden just walking and looking, then sketching in black and white amidst the Garden’s blazing autumnal palette.  She said there was too much to see and that she had to discipline herself to stand back and identify what interested her.  Despite her best intentions, she was soon dabbling with colour in the studio, trying to capture her reactions from a previous visit to the garden and then finding things had changed when she returned, the natural progression of the Garden’s response to the evolving seasons.

Painting a garden is a way of communicating what the eye sees and the heart feels that is complicated by technique, restrained by materials, and, in Sue’s case, caught between abstraction and representation.   She was often flooded with different ideas, beset by too much scope, overwhelmed by colour and detail, and tested by the garden’s unceasing changes from week to week.  In response, she learned to make decisions differently, test new methods, and even changed how she painted.

She explained that ‘A garden is very different from my normal landscape subject matter. It’s more enclosed with hardly ever a glimpse of a horizon line. It’s harder to simplify shape and form because you get distracted with the detail and textures.’ 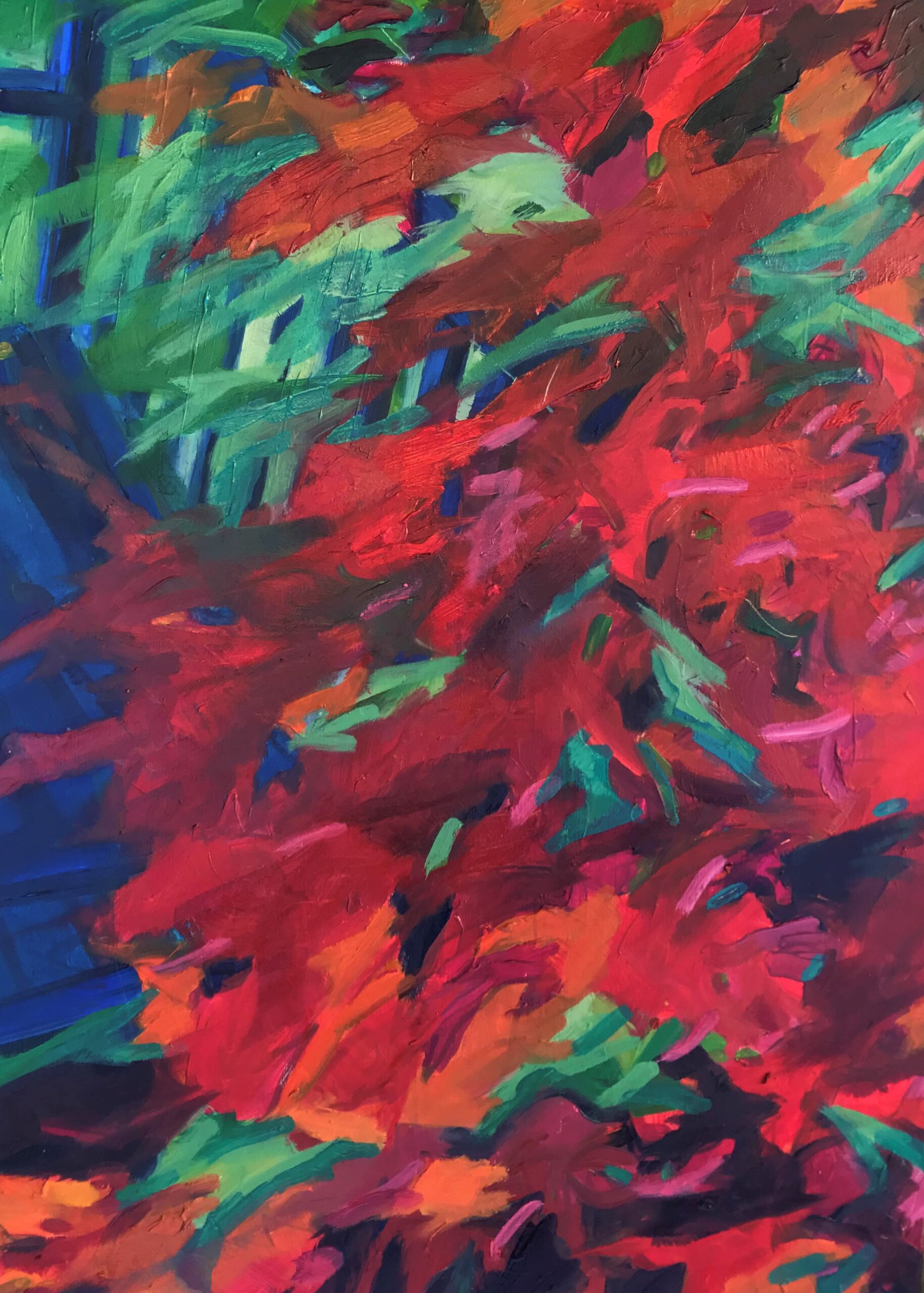 Sue’s challenge to herself was to absorb what she called ‘the essence of the garden’ including its sounds and physicality, asking rhetorically ‘How can I show the sound of a woodpecker with a mark?!’.  In the process, she developed a feel for the garden’s creators, Joyce Robinson and John Brookes MBE, whose presence was easier to convey than bird calls.

A brilliant horticulturalist, Mrs. Robinson saw her garden as a canvas on which she created her pictures.  Presumably, like many women of her generation, she’d been taught to draw and paint, skills that guided her as her garden evolved.  As an adult, she became a keen observer of natural plantings, enabling her to take a painterly approach to her garden.  She experimented not only with plants, but with different levels of grass and materials, notably gravel.  She created compositions throughout the Garden, culminating in the two dry riverbeds she created in the late 1970s – in and of themselves land art. 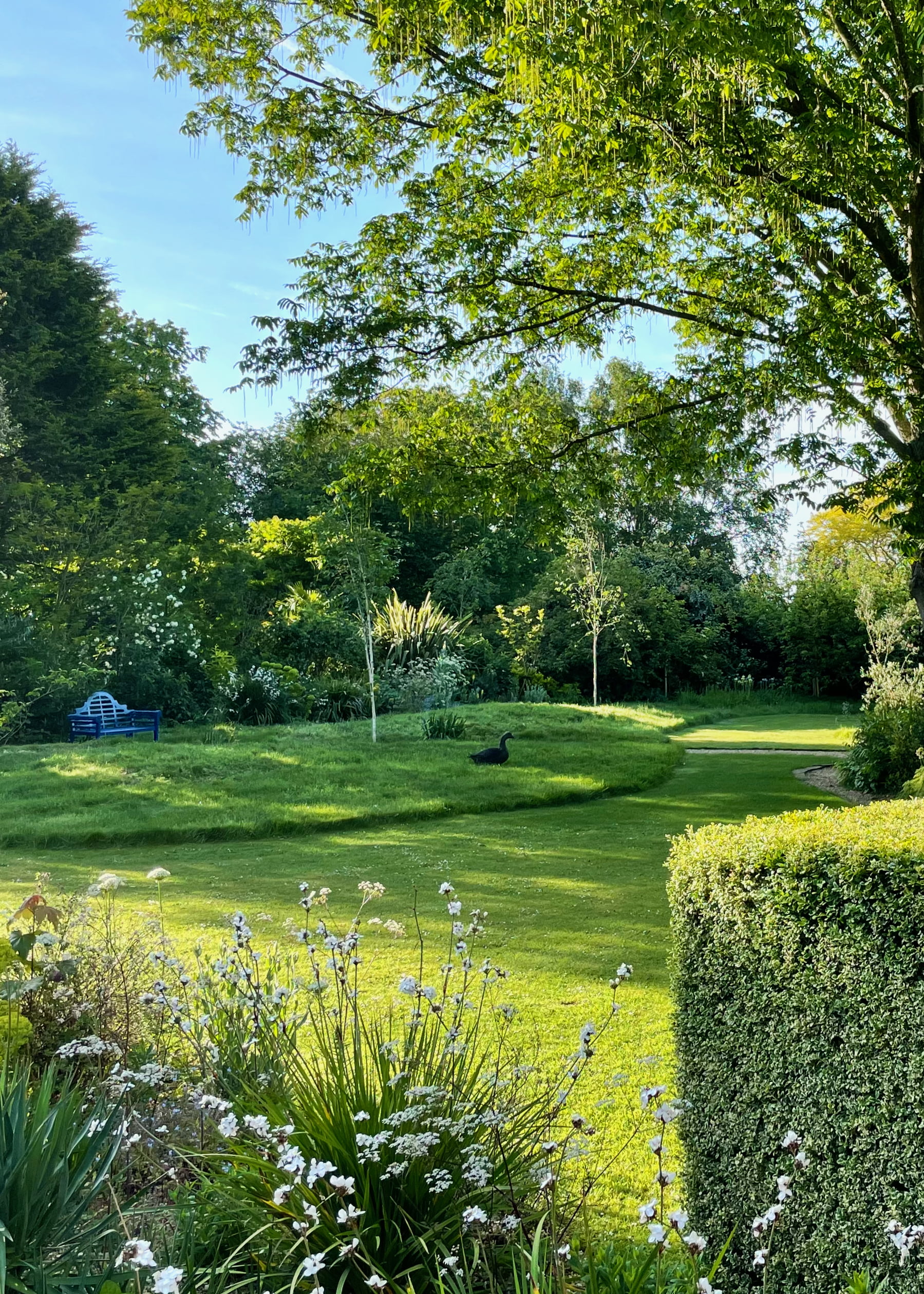 The lines and structure of the Clock House Garden reveal Mondrian’s influence on John Brookes.

John Brookes, who took over the Garden, saw gardens as collages of shapes and likened creating a garden to creating sculpture.  For him, the natural materials of ‘art in nature’ were the basic materials with which landscape designers work.  Their combined approaches at Denmans resulted in strong design and structure in three dimensions overlaid with softer, contrasting horticultural textures and masses.

Emphatically not a botanical painter, Sue made peace with painting the forms of individuals flowers as they began to re-emerge in the spring.  Tulips caught her eye, and the light pink flowers of a stunning magnolia tree demanded her attention, despite describing them as ‘chocolate box’.  These were followed by the globes of allium and spikes of lupins and foxglove. 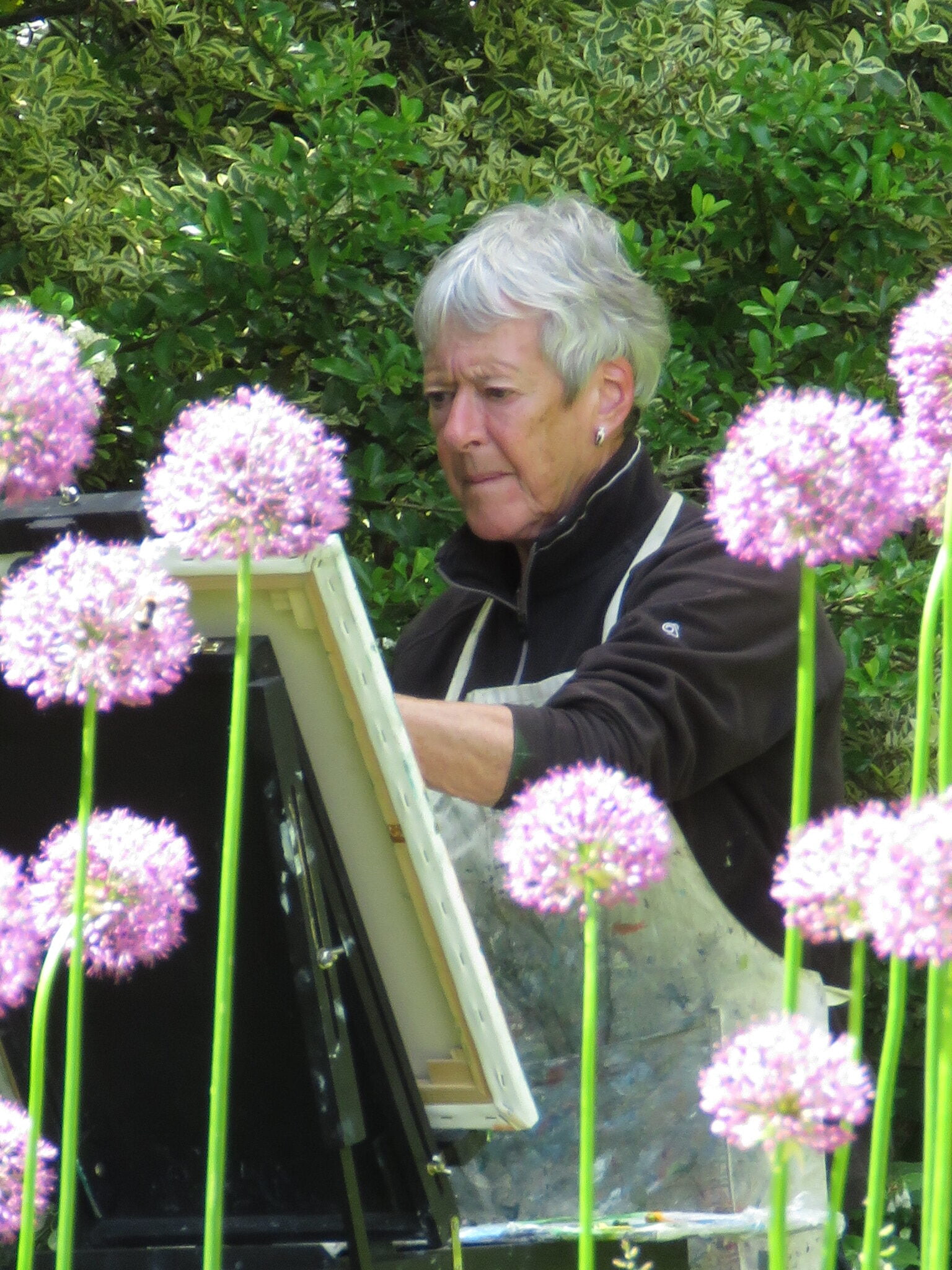 Sue tackles the allium blooming near the Nut Walk in late May.

Reaching beyond the passings seasons and what Mrs. Robinson’s called ‘a profusion of growing beauty’, Sue also took the time to connect with the garden deeply, connecting with its creators, grasping the garden’s strong but simple structure, influenced heavily by John Brookes’ study of Modernism and abstract art, and its detail, rooted in Mrs. Robinson’s understanding of plant combinations, colour, and layout.  The two – structure and detail — are inextricable.

Over her year-in-residence, Sue has become as familiar with the garden as those of us who work in it, but more importantly, she’s also gained perspective into her own approach to painting, and she has met the challenges of a year limited to working in one space. 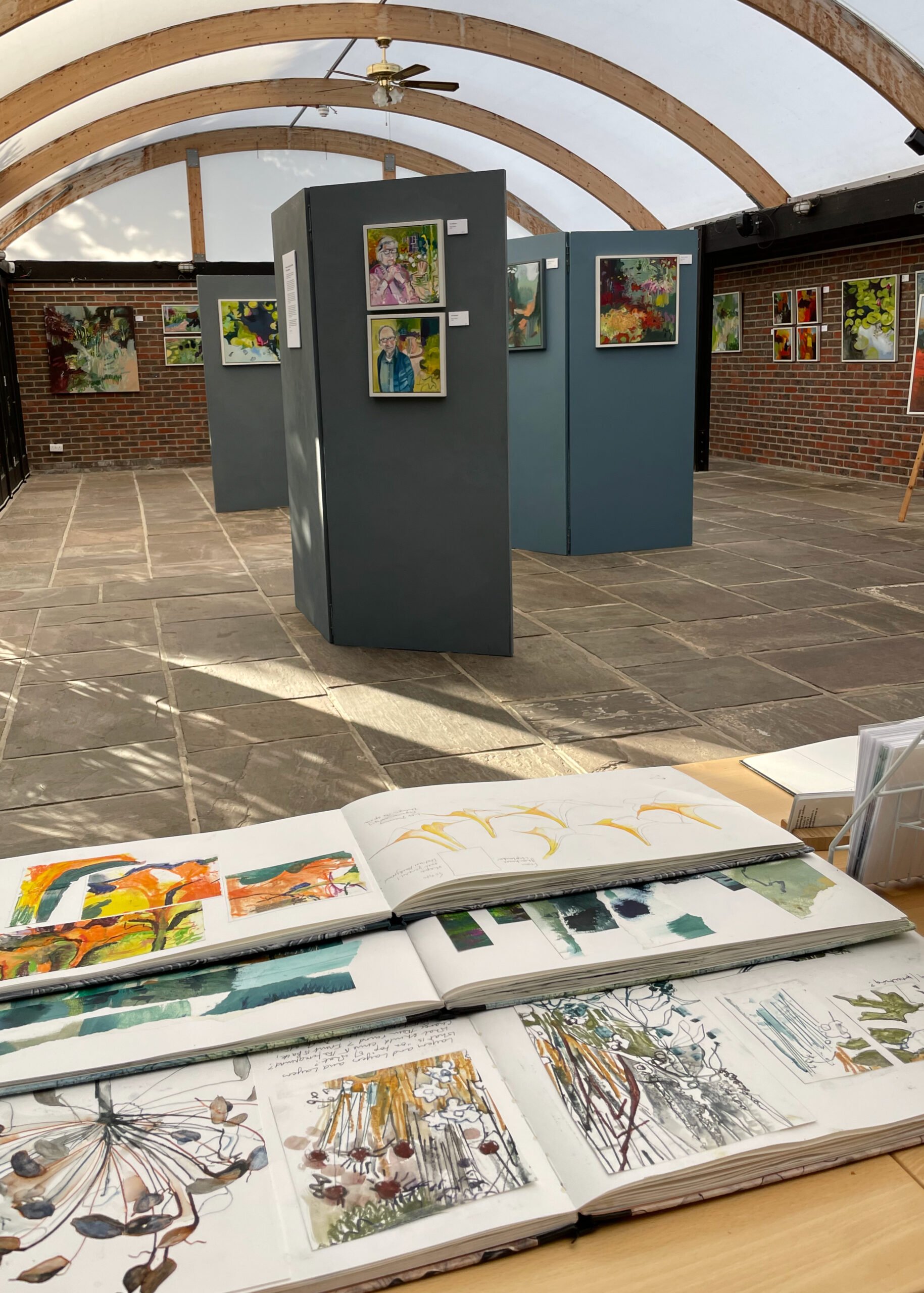 On exhibition now at Denmans: Paintings, prints, and sketchbooks.

Just as challenging, perhaps, has been deciding which of her artworks to share and how to present them.  Instead of following the seasons, Sue has hung the images in the exhibition, ‘A Year at Denmans’, so they relate to one another like the images in the garden play off one another.  Just as the garden offers glimpses of views throughout, she has arranged the exhibition so that viewers catch glimpses of other works.  Several works are available for visitors to arrange and rearrange in their own patterns so they can share in Sue’s experience of working with colour.  Her sketchbooks reflect her ‘voyage of discovery’ over the past twelve months.

In August, as she was preparing for the exhibition, Sue wrote that

‘People may not recognise some work or feel connected to it, but it is MY interpretation of the time and space and I hope I’ve been honest in all my responses.’

It is this honesty in sharing her sense of Denmans that makes her work compelling and communicates her experience with the rest of us.