“Let’s start with a pergola …”

“Let’s start with a pergola. If I paint a picture of dappled light filtering through the leaves of a climbing rose hung with scented flowers, of the evening fragrance of honeysuckle and bunches of grapes temptingly beyond reach – you can see the attraction; throw in a perfumed wisteria and an early Clematis armanii and you have a winner.” 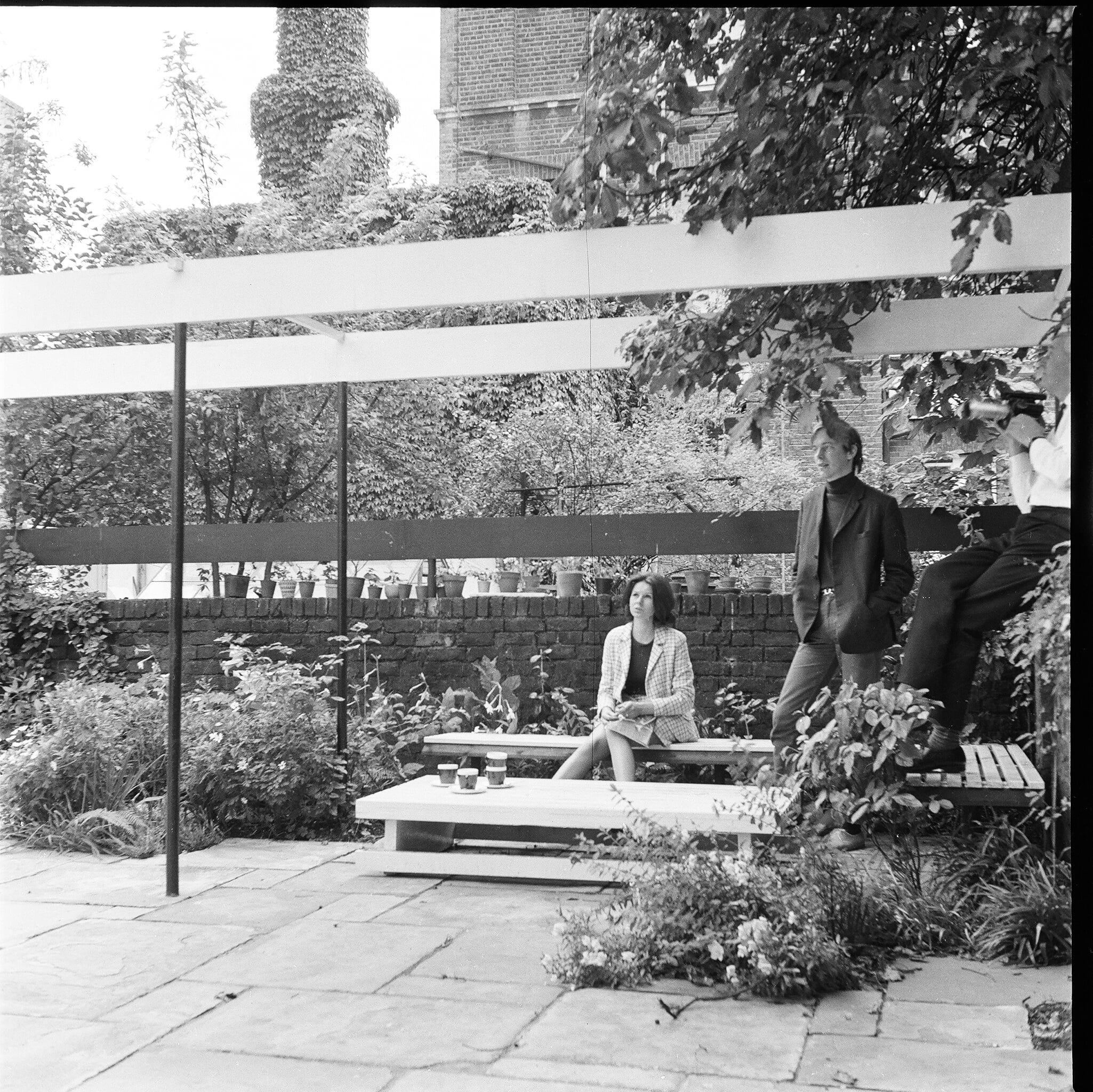 One of the many pergolas John designed for posh London gardens in the 1960s.

So wrote John Brookes MBE in an essay included in How to Design a Garden (to be published this autumn by Pimpernel Press), which offers practical advice about garden design.  He continued, listing the various benefits of pergolas – a sense of enclosure, a way to soften less beautiful architectural features, a transition from indoors to out, even privacy.  It was a device he included in many of the garden designs he created during his 60+ year career.

When John moved to Denmans in 1980 and renovated the stable on the northwest corner of the property, he included a very simple pergola over his own terrace which flowed out from his kitchen.  Reminiscent of pergolas he had designed for posh town gardens in London, it was constructed of three black scaffolding poles each of which supported a simple black timber plank that connected to the wall opposite.

His pergola created a “room outside” for Clock House, the name he gave to the newly renovated stable which was to be his new home and studio.  It also served as a transition into the garden in front of Clock House, which, unlike the rest of the garden at Denmans, is a study in linear lines and shapes.  Boxwood cubes accentuate the design, giving it a shrubby, structural third dimension and amplify the sense of enclosure.

Some of the original lines of the Clock House garden were hidden until last year, obscured by overgrown shrubs and trees, and perennials gone wild.  When a giant Phormium tenax ‘Variegatum’ fell over for the fatal second time in early 2020 (the first time it fell over in 2017, John propped it up with firewood), we began to see the details of his design, some of which we did not know existed.  Slowly and deliberately, we began cutting back choisyia, mahonia, jasmine, pittosporum, and lonicera, exposing the brick edging in its entirety.  As we finished this effort, the thought occurred that he had been inspired by Piet Mondrian in creating this space. The rest of the garden, he said, was inspired by the great Brazilian landscape designer, Roberto Burle-Marx (with, I suspect, a little Thomas Church thrown in for good measure). 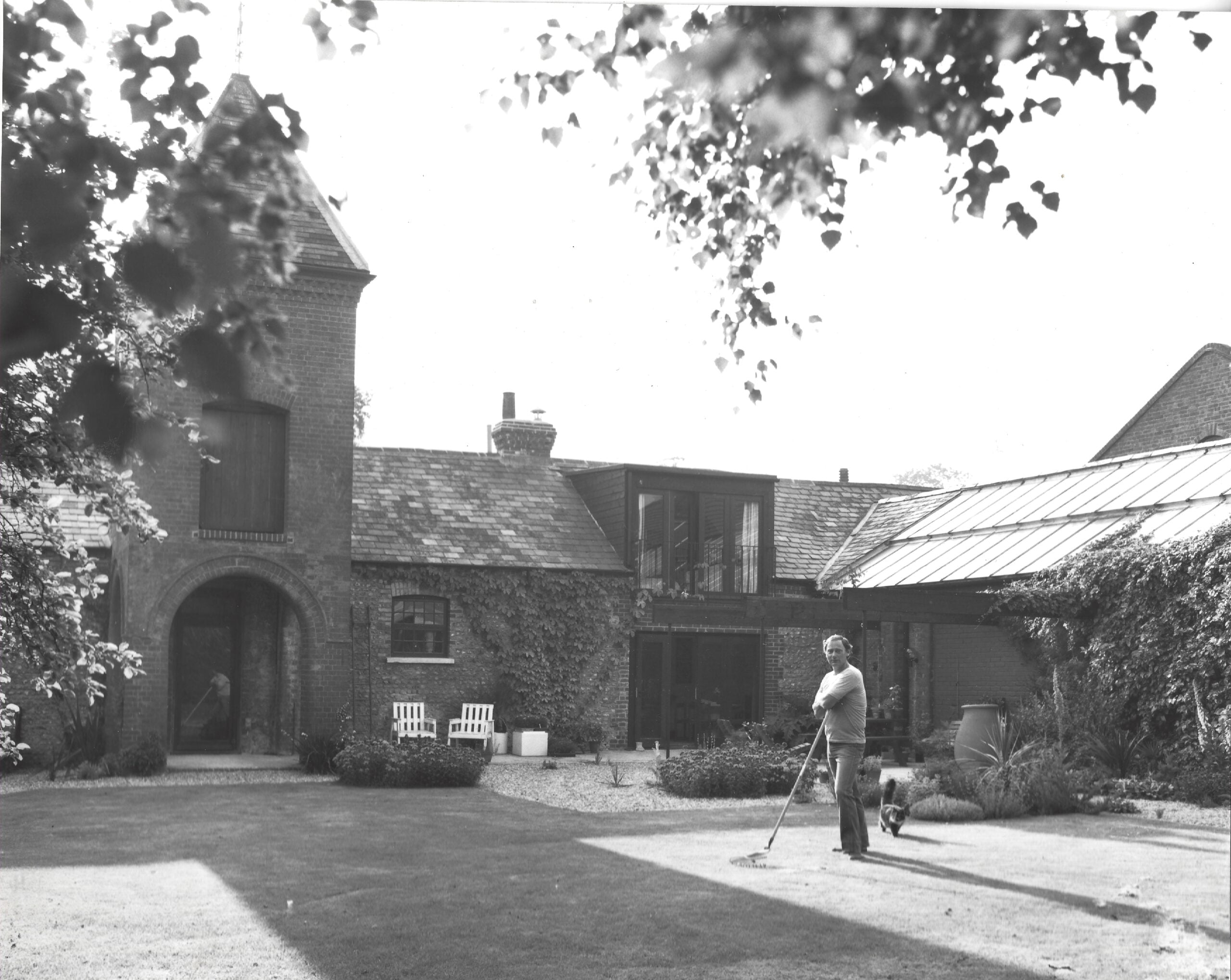 John Brookes standing in front of Clock House c 1980, his new pergola visible to the right.

Back to the pergola.  The original was long gone, having probably deteriorated and become structurally unsound.  After having cut back such a substantial amount of vegetation, the terrace felt exposed.  It needed a pergola, so, with encouragement from a designer who worked with John for over a decade in the 1990s, we decided to recreate the one John had built back in the early 1980’s.

Delayed by the pandemic — the timbers took forever to arrive — we have finally done so.  John’s room outside is back.  The structure provides some shade on sunny days, but its greater function is to provide a sense of enclosure and a visual link between the terrace and Clock House. 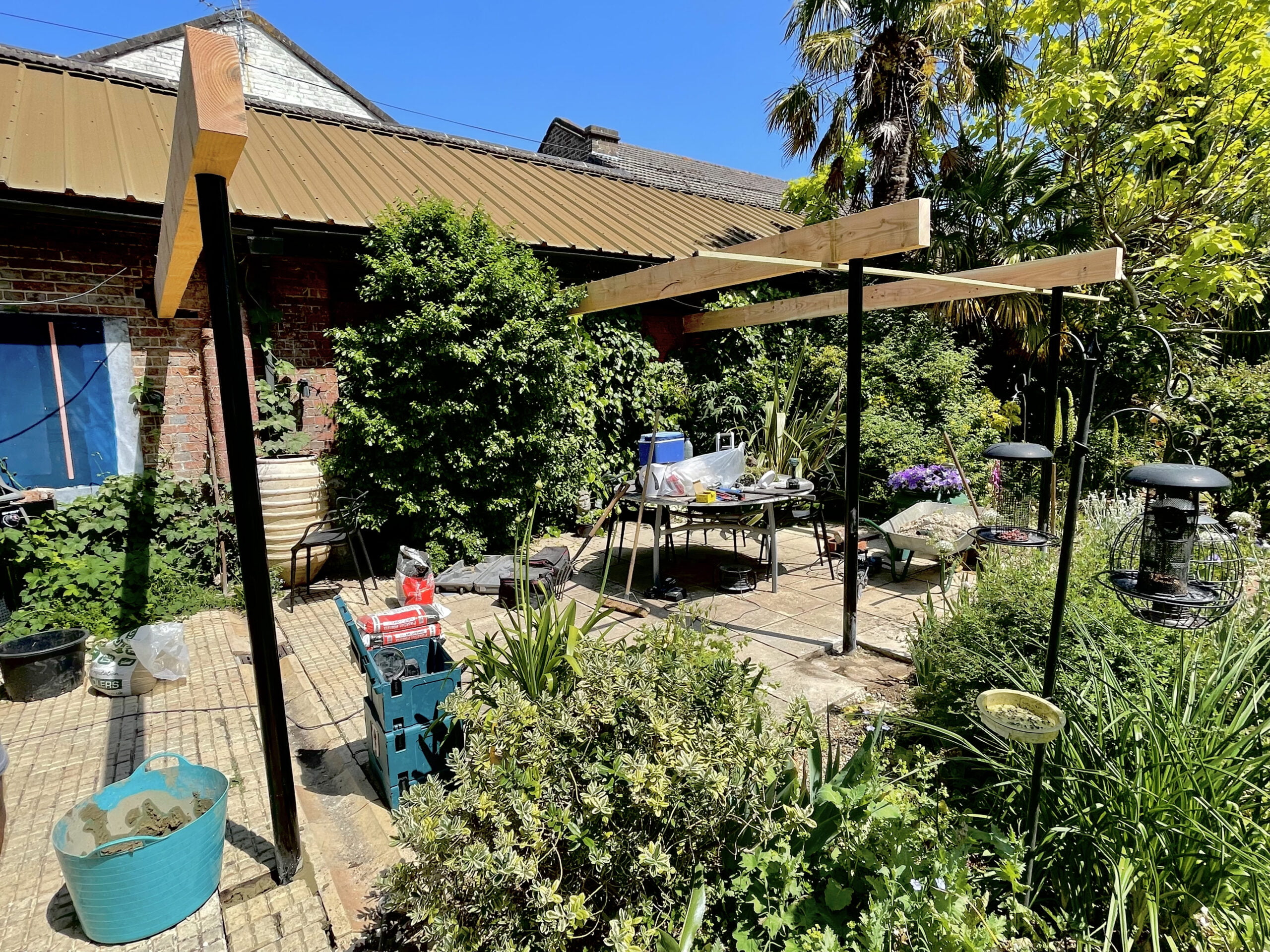 Rebuilding the old pergola was a straightforward project and took less than one day to complete.

We were able to replicate the original pergola quite easily.  The old posts had been cut flush to the terrace so we knew where all three went exactly.  It was a matter of taking a jackhammer to the old concrete footings and putting the new posts in.  We could tell how tall it was because there were three notches in the adjacent building where the old timbers had once rested.   And we know it was painted black to match the trim on Clock House.  What I expected would be a two day project was wrapped up by midafternoon.

There is still work to do, of course, including painting the Douglas fir timbers and selecting the vines and climbers that will clothe the poles, but this is a major – and very exciting — step forward in the restoration of Denmans.